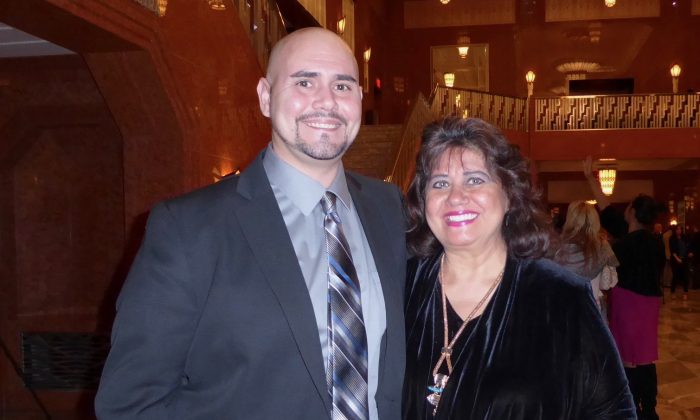 LAS VEGAS—Jubilation poured from Geri Timko as she shared how New York-based Shen Yun Performing Arts had affected her. The beauty of the classical Chinese dancers, of their costumes, their gentleness, overwhelmed her.

“It was so beautiful. It was just beautiful,” said Ms. Timko, who works in a dentist’s office. She attended the final performance of Shen Yun in Las Vegas with Michael Galineau, at The Smith Center for the Performing on Jan. 24

New York-based Shen Yun is known for its exquisite dances which tell stories of China from its ancient beginnings to the present day. These stories give glimpses of celestial spheres, of courtly palaces, and of Mongolian grasslands, among many others.

Mr. Galineau, who works in insurance, loved the drums of the Mongolian folk dance. As a fan of the martial arts, he enjoyed learning how classical Chinese dance evolved alongside the martial arts, as a gentle complement to it.

But sometimes audience members find that the vocalists touch them more profoundly than the dances. Singing in Chinese, using classical bel canto style, the vocalists share philosophical insights gleaned from a rich heritage of spiritual teachings.

The song lyrics are projected in Chinese and English behind the singers.

“It meant a lot to me. It hit home,” Ms. Timko said of the song’s meanings.

She understood the message of the songs to be that we should always do good on earth so that we can go to heaven. And that fame and fortune can’t accompany us to heaven, therefore they are not important.

“The main thing being out here is just to be a good person,” she said.

Being a good person is at the heart of what Shen Yun is trying to revive with its performances. In presenting the performing arts of ancient China, the company hopes to display the values of that traditional culture—values that include truthfulness, kindness, and reverence for heaven.

“The Chinese people are so gentle. They’re gentle, and you can tell they’re very kind people,” was the impression Ms. Timko got from the performers onstage.

“Can’t say enough about it,” she said.