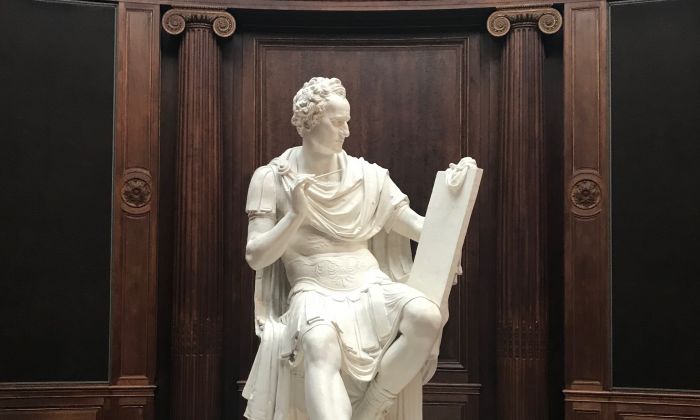 NEW YORK—The face of the first president of the United States is well imprinted on our minds. We see it countless times on the one-dollar bill. We take it for granted that this iconic image of George Washington and the portrait by Gilbert Stuart from which it was derived is what he really looked like. Yet, a more accurate likeness of Washington was sculpted by the Italian artist Antonio Canova.

This most celebrated neoclassical sculptor was born in 1757 to a humble family in the small town of Possagno, on the Venetian mainland. At the age of 23, he moved to Rome where he created sculptures and monuments for popes, emperors, kings, and aristocrats.

In 1816, Canova was commissioned by the General Assembly of North Carolina to create a marble statue of Washington to stand in the State Capitol in Raleigh. At that time, his sculptures were standing in Italy, France, England, Austria, Germany, Holland, Poland, and Russia.

We are not so familiar with the only work Canova created for the United States, because it only existed for less than a decade. Tragically, the marble statue was destroyed in a blazing fire, crushed by the collapsing roof of the statehouse on June 21, 1831. Canova’s “George Washington” would have been one of the most important artistic treasures of U.S. history.

Still, we are fortunate to be able to see a full-size plaster cast (the “modello”) Canova made in preparation for the marble statue, and other preparatory objects related to the creation of his work, in the exhibition “Canova’s George Washington” at The Frick Collection until Sept. 23, 2018. In the fall of 2018, it will travel to Possagno, Italy, to be shown at the Gypsotheca e Museo Antonio Canova.

“This is the model which in many ways is the original to the marble,” said Xavier F. Salomon, Peter Jay Sharp chief curator at The Frick, at a press preview on May 21.

Salomon organized the exhibition in collaboration with Mario Guderzo, director of the Gypsotheca e Museo Antonio Canova in Possagno; the Venice International Foundation; and Friends of Venice. Coincidentally, the exhibition and the publication of its catalog—co-authored by Salomon, Guderzo, and Guido Beltramini, the director of the Palladio Museum in Vicenza—takes place 200 years after Canova completed his marble statue in 1818.

“In many ways, this exhibition is the phoenix rising from the ashes,” said Ian Wardropper, the director of The Frick.

A Story of Perseverance

The story of Canova’s “George Washington” involves some of the most important statesmen and cultural figures on both sides of the Atlantic. It also involves some unsung heroes, like the American consul in Livorno, Italy, Thomas Appleton, who was involved in every step of the project. On the nefarious side, it involves a couple of opportunists and a swindler, namely, Robert Ball Hughes, the British sculptor who ran off with money intended for the restoration of the statue.

Starting with the General Assembly of North Carolina commissioning Canova in 1816; to Canova completing the marble statue two years later; to shipping it via a merchant ship and then, due to its heavy weight, transferring it to a warship to go across the Atlantic, taking almost a year; to its destruction a decade later; to a thwarted  attempt to have it restored; to the Italian government giving a plaster cast to North Carolina in 1909; to about 50 years later, when a North Carolina committee secured the funds for a faithful marble copy to be made from the plaster cast; and to the Italian artist Romano Vio completing the marble reproduction in 1970; ultimately, this exhibition tells a more fundamental story.

At its core, the exhibition and catalog “Canova’s George Washington” tells a story demonstrating the will and forbearance of the people who wanted to honor the man who was intrinsic to the birth of the United States. It is a story of generosity in the face of greed, and of the importance of an artistic tradition transmitting the principles and morality underpinning the United States and its people.

Kindred Spirits Far and Near

Canova had never met Washington in person, and Washington probably had not even heard of Canova. How was Canova then able to reproduce Washington’s likeness so well, 16 years after Washington’s death? And why did he depict him in ancient Roman garb—armor all’antica, in the manner of the ancient Romans?

“We are lucky to have about 200 letters that outline this commission from beginning to end,” Salomon said.

Including 95 letters, the catalog gives some amusing details of the decision-making process. We learn that only two artists had sculpted Washington from life, Jean-Antoine Houdon and Giuseppe Ceracchi.

Washington’s family considered Houdon’s terracotta bust to be the most faithful to the sitter. It was the first to be made on and with American soil, and it was fired in Washington’s oven at Mount Vernon. Houdon also made a life mask of Washington, with plaster of Paris, which is displayed in the exhibition.

Canova relied on the life mask Houdon made, as well as on a plaster cast of Ceracchi’s bust of Washington. Multiple copies of Ceracchi’s bust were made and sold in different sizes and materials. Ceracchi did not live to see Canova’s “Washington” because he was guillotined in 1801 for attempting to assassinate Napoleon as part of the Daggers Conspiracy.

Canova did not use any paintings, like the popular portraits by Stuart, to create his sculpture.

We also learn from the exhibit and catalog that it was the decision of the third U.S. president, Thomas Jefferson, to choose Canova over other artists like Erik Gustaf Göthe, Bertel Thorvaldsen, and Lorenzo Bartolini. Yet Jefferson had never met Canova, nor had he ever seen any of Canova’s works in person.

We might think that was a risky decision. But the founding father Jefferson was the arbiter of taste par excellence. As soon as the General Assembly of North Carolina received Jefferson’s point-by-point letter, there was no further discussion. They would have to hire the best sculptor known at the time, Canova; the best marble from Italy, Carrera marble; and the intermediary for the commission would have to be the American consul in the Tuscan harbor city of Livorno, Thomas Appleton, and so forth.

It’s a “witness to Jefferson’s power as a cultural leader in the early history of this country,” Salomon said.

In the late 18th and early 19th centuries, the United States was still forming its symbols and structure, “not only on a political and social level but also on a cultural and artistic level,” Salomon explained. One of the big decisions the founding fathers had to make was about the artistic language that would characterize the republic.

The U.S. founders were classically educated in Roman republican ideals, Athenian democratic philosophy, Christian virtues, and Enlightenment reason. Jefferson was no exception. He decided the architectural language of this republic should be Palladian—that is, derived from the designs of the Venetian architect Andrea Palladio (1508–1580). “That is because Venice had a long tradition of being a republic, and Palladian architecture is seen as a symbol of freedom and liberty,” Salomon said.

There was an ongoing discussion about the republic’s aesthetics with regard to the style of sculpture, neoclassical or otherwise, to be incorporated in the Palladian architecture that we see; for example, in the District of Columbia and state Capitol buildings.

About 30 years before Canova was commissioned, Jefferson was asked for his opinion on how the sculptor Houdon should depict Washington for the statue that would stand in the Capitol of Richmond, Virginia.

On Aug. 14, 1787, Jefferson wrote to Washington: “The modern dress for your statue would meet your approbation. … I think a modern in an antique dress as just an object of ridicule as an Hercules or Marius with a periwig and chapeau bras.”

Decades later, for Canova’s “Washington,” however, Jefferson suggested the opposite: “I am sure the artist, and every person of taste in Europe would be for the Roman, the effect of which is undoubtedly of a different order. Our boots and regimentals have a very puny effect.”

Canova agreed with Jefferson’s suggestion. He made drawings, three-dimensional sketches, in preparation for the full-size plaster modello. As it was standard practice of academically trained artists, Canova also created an anatomical sketch of a nude figure. Afterward, he created a clothed three-dimensional sketch of Washington in ancient Roman garb—armor all’antica. The figure is highly decorated. Throughout his creative process, he replaced a crown and scepter, as seen in the second sketch, with a sword and baton.

In the final full-size plaster cast, the clothes of the statue reference the ancient republican hero Lucius Quinctius Cincinnatus. Similarly to Washington, the Roman hero stepped down and returned to his farm after having won a war. Washington is shown drafting his first farewell address to the nation.

Canova’s marble sculptures were admired for what the classicist and father of archaeology Johann Joachim Winckelmann would describe as “noble simplicity and quiet grandeur.”

Canova engaged his intellect and spirit as much as he refined the dexterity of his hands. “I work all day like a dog, but it is also true that almost every day I listen to readings, and thus I have now listened for the third time to all eight volumes on Homer,” Canova wrote to a friend.

When Canova was in the process of creating his “Washington,” his assistant read to him the “Story of the War of Independence of the United States of America” (“Storia della guerra dell’independenza degli Stati Uniti d’America“) by Carlo Botta.

Though he did not meet the first president in person, Canova depicted Washington as if he had met him. Canova’s close friend, Pietro Giordani, claimed to have heard the sculptor say, “I made him [Washington] gladly, because he is a gentleman.”

When the statue was unveiled, it received ample praise. On March 17, 1820, the Raleigh Register newspaper, in describing the statue, reported: “Even the celebrated Statues of the Apollo of Belvidere [sic] and the Venus of Medici have their blemishes, but the Statue of Washington, like Washington himself, is without a stain or spot.”

Also in Europe, the scholar and host of a Venetian salon, Isabella Teotochi Albrizzi (1760–1836), wrote about the statue: “The noble sculptor has summarized all his talents, all the virtues of the immortal hero; inasmuch as the composure also shines of a candid and immaculate morality.”

Sadly, neither Canova nor Jefferson saw the marble statue in place. But they did not live long enough to see its destruction in 1831 either.

The question remains, what would Washington have thought of the statue had he seen it in his lifetime?

Apparently, Washington was modest and rather shy about artistic representations of himself. He understood the importance of being portrayed as the victorious general and head of state that he was, but he would sit for portraits rather begrudgingly.

“I don’t think he would have been particularly thrilled by this, but everyone who saw this loved it,” Salomon said.

In the 19th century, the European public found the idea of a head of state relinquishing his title astonishing. In 1784, writing about Washington’s resignation from the army, the painter John Trumbull wrote: “Tis a conduct so novel, so inconceivable to people, who, far from giving up powers they possess, are willing to convulse the empire to acquire more.”

Two hundred years after Canova created his marble statue of Washington, its plaster casts and marble copy continue to celebrate the first president of the United States. It also celebrates “the core of American democracy, which has been the same from the end of the 18th century to today, which is the peaceful passage of power from one president to another,” Salomon said.

Running concurrently with the Frick exhibition are “Canova e la Danza (at the Italian Cultural Institute until June 28, 2018) and “Antonio Canova by Fabio Sonata” (at the Italian Consulate until Sept. 23, 2018).

The New Worlds of Vision and Music of the Fête Galante

Zurbarán’s Jacob and His Twelve Sons Reunite at The Frick