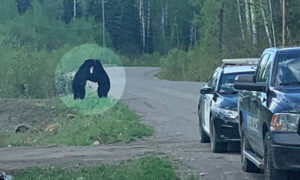 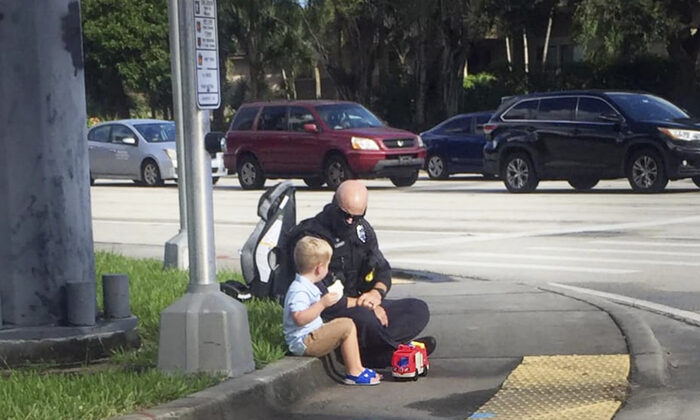 Being in a car crash can be a shock to the system for a young child to say the least. First responders know that offering reassurance amidst emotional trauma can be as important as treating the wounded.

Thankfully, when a three-car crash happened in Coral Springs, Florida, last month, no one was injured. A young boy who was involved in the crash sat on the curb alone while his parents dealt with the cleanup and logistics that followed.

In a heartwarming moment of kindness, one witness watched a police officer sit down with the boy. While the young child played with a firetruck, the officer talked to him about his favorite cartoon characters, keeping his mind off the shock that can follow a car wreck.

Meanwhile, Pompano Beach resident Jane Balestriero was on her way home from a doctor’s appointment when she happened upon the crash on University Drive and Riverside Drive.

Moved by the sight, she snapped a photo and shared it with the Coral Springs Police Department on Facebook, where it quickly went viral.

“It was an act of kindness,” she wrote. “I try to find a little kindness every day in a world that’s gone crazy.”

After witnessing the footage of police brutality that led up to George Floyd’s death, Balestriero told FaithPot that she wanted everyone to see the kind of compassion police officers are capable of.

The officer in question so happens to be Bryan Dougherty, a member of a SWAT team, who has been with the Coral Springs Police Department since 2016.

The Coral Springs Police Department congratulated Officer Dougherty on his act of kindness in a post on Facebook.

“So proud of our officers. Things like this happen often, but are rarely reported on,” captioned Police Chief Clyde Parry.

Balestriero believes in giving recognition where it’s due.

She says that a friend plans to paint a rock with a depiction of Dougherty’s badge number and the child’s favorite cartoon character as a memento that can be kept at the Coral Springs Police Department.

“A single act of kindness can have a ripple effect,” she said. “We have to see the kindness in the world.”