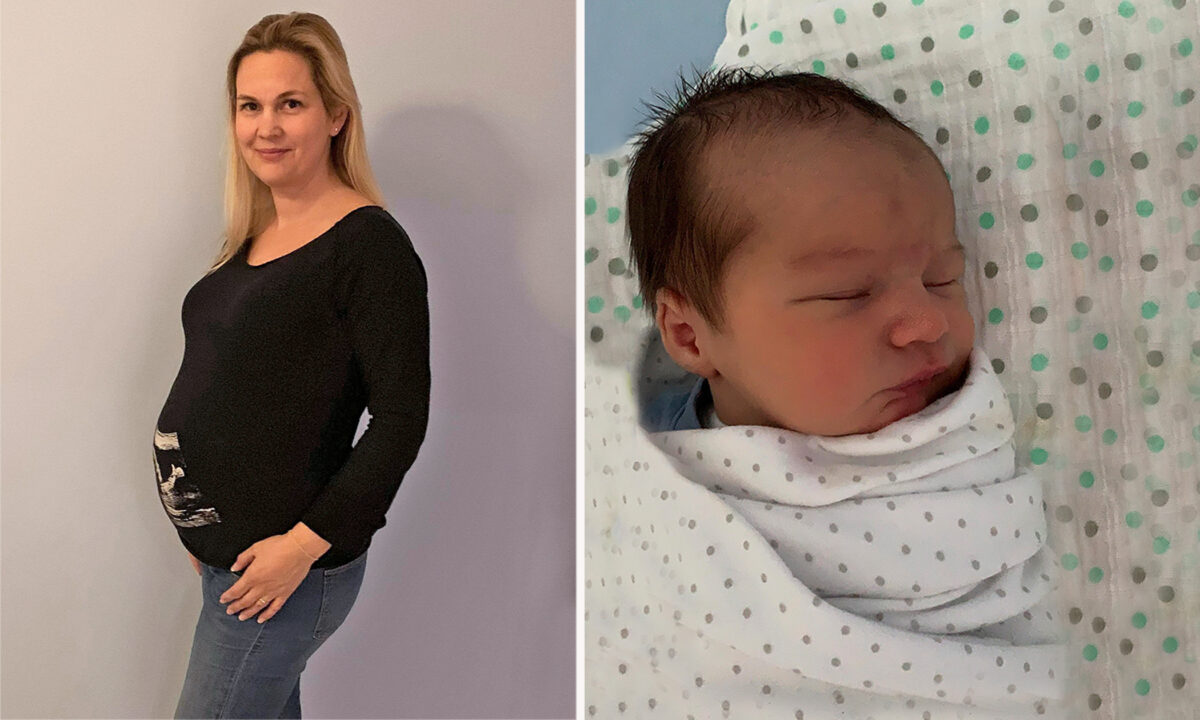 Cancer Survivor Was Told She Had No Realistic Chance of Fertility, Delivers Miracle Baby

A cancer survivor was left tinged with sadness after completing her breast cancer treatment because although she’d beaten cancer, doctors had told her the treatment meant her dream of completing her family with a third child was over.

After undergoing intensive treatment for breast cancer, Alison Watts, who was 29, had gone through early menopause, and doctors had written to her to confirm she had “no realistic chance” of being fertile.

However, against all odds, Alison, now 42, and her husband Geoff, 41, fell pregnant naturally with a baby boy, Grayson, a decade later.

“He is our miracle, the final and perfect piece to our family jigsaw,” Alison said. “Pregnancy after cancer is possible and people should never give up hope. You never know what’s around the corner and you don’t know what might happen if you don’t try.”

The couple, from Cheltenham, Glos, England, already had two children, Freya, then 5, and Cody, then 2. But they were planning to try for a third baby when Alison found a lump in her breast just before her 30th birthday.

“Cody was just a toddler, almost two and he was playing with my necklace. As I moved his hand to stop him breaking it, I suddenly felt a hard lump,” Alison said.

Curious to know more about the lump, she arranged a doctor’s appointment for the very next day. During that initial appointment, Alison was assured there was no need to be concerned as she was at low-risk of cancer due to her age. She was told that if she was still worried she could be referred for a checkup six weeks later.

“I just couldn’t wait, maybe it was my gut instinct but I had to know for sure so I had a private consultation and a biopsy later that same week. By the following week the results were back,” Alison said.

Alison’s hunch turned out to be true. When she was first diagnosed, the couple went to meet a fertility consultant and discussed freezing her eggs as she was only 29. However, this step meant that she would have to delay her chemotherapy treatment for three additional months—a step the couple were not willing to take.

“We had to put my survival first, for the sake of the children we already had. They needed me to be ok, so I had to start the treatment as soon as possible,” Alison said.

Following an operation to remove the lump, Alison underwent six rounds of grueling chemotherapy within the time of just four months, before starting a further six weeks of radiotherapy and a year of Herceptin treatment.

It wasn’t until a year after her treatment had ended that Alison and Geoff were ready to face the reality that the life-saving treatment had come at a cost.

“I knew having chemotherapy would almost certainly destroy my fertility but it was a risk I had to take.  I  was already grateful for my two children but I just couldn’t shake off the feeling of wishing I could have another child,” Alison said. “Cancer stole that choice and for me that was the hardest part.”

Although Alison knew that she and her husband had made the right decision of not freezing the eggs, as they couldn’t delay her treatment, it didn’t make the “reality any easier.”

Their fears were confirmed when Alison had a blood test and received the crushing news that she had no chance of having another baby naturally.

“I was absolutely gutted when I opened the letter. I was stood in the kitchen and I wasn’t expecting the results so soon so the letter took me completely by surprise,” Alison said. “Although the results were expected seeing it in black and white was very difficult to come to terms with.”

The letter said that she had “no realistic prospect of fertility” and the couple decided they had no choice but to move on.

As Alison was approaching 40, the prospect of having another baby was something she really was considering.

“I needed to try and see if it was possible and not get more years down the line and have to live with ifs and maybes,” Alison said. “I knew in my heart I wasn’t done with having babies, I just knew something, or someone was missing from our family.”

In order to try and conceive naturally, Alison had to make the huge decision to stop taking Tamoxifen, which blocks estrogen so as to stop any cancer cells from growing. after almost 10 years on the drug.

“Deciding to stop it was a very scary decision, it was my safety net to keep away cancer. Geoff and I thought long and hard about it but following a consultation with my highly regarded consultant oncologist we decided to go for it,” Alison said.

The drug mimics menopause, but once Alison felt it was out of her system, just three months later, something incredible happened.

“I just knew. But it was still a huge surprise to us all. I couldn’t believe after all these years it was happening.” she said.

Having spent her 30th birthday facing cancer, Alison was now celebrating her 40th carrying the baby she never thought she would have.

Alison had an easy and healthy pregnancy and baby Grayson arrived safely in February 2019. “Miracles do happen, Grayson is our reminder to never give up hope,” Alison said.

Her two other kids are now old enough to understand what their mother has been through. They also help in caring for Grayson.