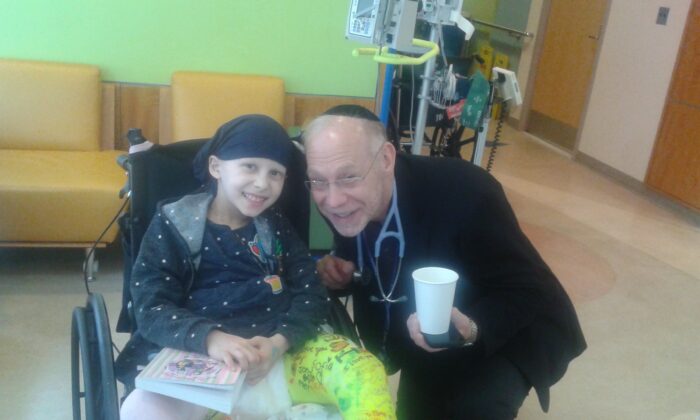 During Elana Laila Koenig’s long battle with cancer, she and her mother Rena Koenig received immense support at the Memorial Sloan Kettering Cancer Center. So much so, that the center has become like a second home to Rena Koenig, even after her daughter’s recovery.

Over the weekend, Rena was at the cancer center to drop off a goodie bag for another child patient, and while she was there, hospital workers approached her and shared their concerns about running out of personal protective equipment (PPE).

When she got home, she got an email from one of the doctors she had worked with over the years, about the same thing: PPE shortages.

Rena’s thoughts were about all the hospital staff that had worked with her daughter during their long battle with cancer.

“Dr. Wexler saved our daughter’s life,” said Rena, who is a business manager at the digital agency Glow. “I want to help keep him safe.”

“My daughter went through cancer treatment when she was almost 8 and spent one and a half years in the hospital. The hospital people are amazing—the nurses, the doctors themselves. He [Dr. Wexler] treated our child as his own child,” Rena said. “She [Elana] would send him emails and he would respond to her emails, with emojis and explaining things to her, making her feel better not only in terms of answer her physical questions, but emotionally he was helping her to go through the experience.”

Elana’s cancer days were dark days. She was spending 75 percent of her time at the hospital during those one and a half years.

So when the pandemic turned hospitals into a crisis zone, it hit home for Rena. People who had stood by their family as a support system were in need of support now, and she and Elana wanted to give it.

Rena happened to have a classmate who has worked in the medical supply industry for years, and so when she heard about the PPE shortages she contacted him to see if there was any way she could help.

He told her that a bulk order could be processed much more quickly than a small order, and so Rena spent the bulk of her weekend setting up and promoting a fundraiser on GoFundMe to provide New York City hospital staff with approved PPE, with a goal to raise $10,000.

In fact, this is not the first time Rena and Elana have helped raise funds for medical needs. After Elana beat cancer, she emerged stronger and with the heart to give back.

When she heard that she was confirmed cancer-free, “it was one of the best days of my life,” Elana said. “I was stuck in that hospital with all the needles and the surgeries, and I was in pain, and I hated it so much. And when the words were spoken that I got to be released, I was so happy, I was crying and jumping up and down.”

Elana participated in fundraising and advocacy work, raising over $1 million in fundraising events for children fighting cancer. Then one day, Elana attended an event where children cancer patients and survivors got together. She ran into a friend of hers who was still undergoing treatment and did not have a wheelchair to get around.

Elana turned to her mother and said, “Mama, it’s time to open the foundation, it’s time to help other people,” Rena said. They incorporated the Koenig Childhood Cancer Foundation just this February, and Rena said it came just in time to help them support those on the frontline to battle COVID-19.

Besides raising money for PPE, the Koenigs have been helping buy and deliver necessities to cancer families self-quarantined at the Ronald McDonald House and in their neighborhood.