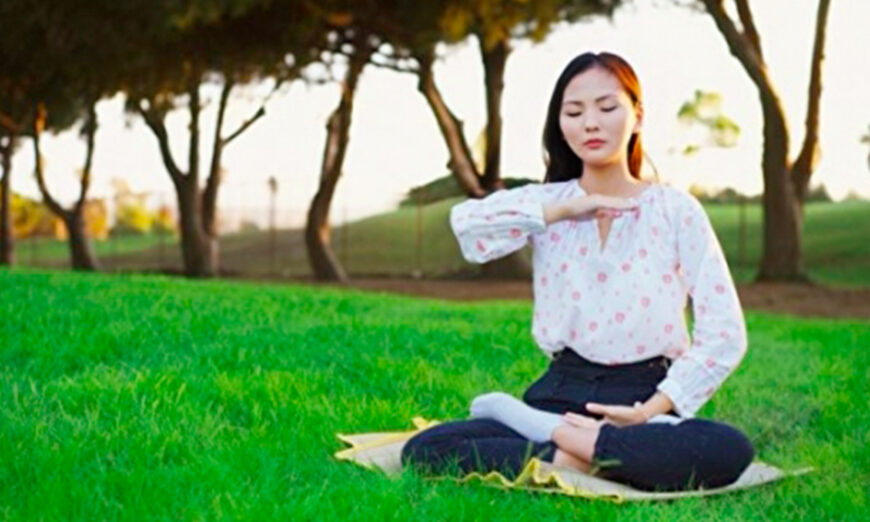 Genia battled 5 cancer recurrences in 13 years and was finally cured after she began practicing the meditative exercises of Falun Dafa. (The Epoch Times)

Hailing from Russia, Genia suffered from acute pain caused by cancer ever since she was a child. However, just as her parents fell into despair, hope arrived in the form of an ancient meditation practice.

Genia used to be a lively young girl like any other child. Genia being the apple of her parents’ eye, her family expected her to grow up to be a healthy and kind person. But, sadly, at the age of 7, Genia was diagnosed with malignant tumors of the anterior abdominal wall—which was cancer—after a tumor started to grow on her right hand.

Genia then underwent surgery for tumor removal. After the operation, she had been recovering; however, things took a turn for the worse just eight months later—her cancer relapsed. Doctors subsequently performed four more operations on Genia. Following the surgical procedures, she even received several courses of chemotherapy and radiotherapy. Eventually, after the painful treatment, the symptoms were brought under control, and doctors announced that Genia showed no signs of cancer in her body.

That’s when her family thought Genia could now finally go to school like any other normal child, as they didn’t expect her cancer to recur.

Genia had been plagued by cancer throughout her childhood. In 2012, she once again confronted the stubborn disease; she was just 20 years old. Genia was hospitalized, and this time around, the cancer cells developed rapidly. To keep the cancer cells from growing in her body, doctors chose to use chemotherapy.

Witnessing their daughter’s unfortunate condition, Genia’s parents fell into despair. Looking at their daughter experiencing yet another agonizing cancer recurrence, they were both mentally and physically exhausted.

However, during this time, the family came across an ancient meditation system.

Genia’s mom recalled: “Four of my relatives and friends practice Falun Gong. My daughter and I know that this cultivation practice has miraculous healing power. If we follow the current treatment plan, the weak Genia would be unable to withstand the pain of chemotherapy. In the end, chemotherapy might even kill her. So, I told my daughter: ‘Let’s practice Falun Gong together.’”

Falun Gong, also known as Falun Dafa, is a self-cultivation practice of mind and body based on the principles of Truthfulness, Compassion, and Tolerance. The practice was first introduced to the public in 1992 in China, where it gained huge popularity and received many awards due to its much-acclaimed health benefits.

Genia started learning Falun Gong’s five simple exercises from her aunt, along with her mother. Since then, Genia and her mom have been practicing the exercises and reading Zhuan Falun—the main book of Falun Gong—regularly.

“My daughter soon recovered her strength. The side effects caused by chemotherapy, such as anemia, nausea, loss of appetite, intestinal problems, all disappeared,” her mom said. “A few months later, Genia undertook an ultrasound scan, and the results showed that her tumor had significantly shrunk.”

Genia’s family shared that through practicing Falun Gong, her health gradually got better and better, and she ushered in a happy life. Years went by, and like any other girl her age, she graduated from college and got married. Genia and her husband settled down in Los Angeles, the United States. She engaged in graphic-design work and worked hard to master English.

Miraculously, Genia’s cancer never returned, and her past struggles with the deadly disease became a distant memory.

Battling five cancer recurrences in 13 years, Genia was mired in a cancer nightmare until she began practicing Falun Gong. Having benefited from the practice, she hopes more people will learn about her story and come to experience the health benefits through cultivating their mind and body, just like she did.