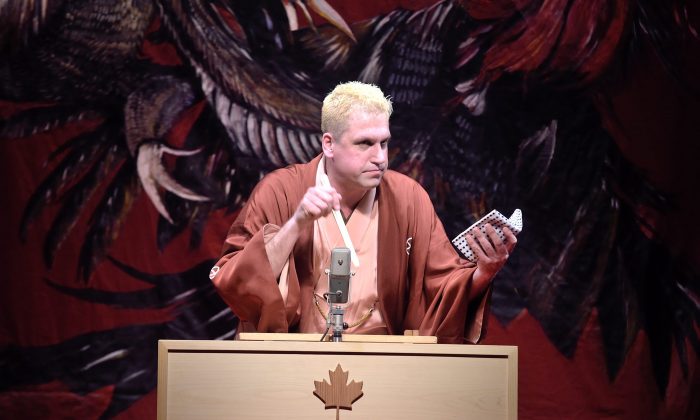 Canadian Raconteur With a Japanese Twist

Humour is something that can transcend cultures and Katsura Sunshine is touring the world to prove it as he presents the 400-year-old traditional Japanese comic storytelling art of rakugo.

Born in Toronto as Gregory Robic, Sunshine fell in love with the ancient art while studying Noh and Kabuki theatre in Japan, where he has lived since 1998. He was immediately drawn to the format and decided he wanted to learn all about it. It takes years to learn the art, and students need to ask a rakugo master to teach them his particular storytelling skills.

Katsura Bunshi VI, a renowned master of rakugo who has written over 200 original stories, agreed to take Sunshine as an apprentice and spent three years teaching him the fine art of Osaka-based kamigata storytelling.

Originally used by Buddhist monks to maintain interest in their sermons, rakugo evolved to become a stylized comic art form.

The student learns from the master by observing and listening to him perform for three to four years. Students live an austere life while in training and actually look after the master by cooking and cleaning for him.

Katsura Bunshi VI (formerly Katsura Shunshi) gave Robic a stage name that includes part of his own name—Katsura Sunshine (sunshine translates as “three sparkles”). Sunshine is currently the only non-Japanese professional rakugo artist in the world.

Originally used by Buddhist monks to maintain interest in their sermons, rakugo evolved to become a stylized comic art form.

A lone performer with just two props— a fan and a hand towel—presents stories. Dressed in a kimono and kneeling on a cushion, the storyteller brings the characters to life following the format of a greeting, a comic monologue in which the storyteller lets the audience get to know him, the main story, and a punchline.

Although fluent in Japanese, Sunshine’s monologues are nonetheless often about how he learned the intricacies of Japanese language and culture over the 17 years he has lived in Japan.

The main stories can be classic tales or modern ones written by the storyteller. The punch line, delivered by one of the characters in the story, can be a play on words that the audience has tried to anticipate but actually adds a twist to the tale.

Characters in the story are differentiated using tone of voice, gestures, body language, and facial expressions. The rakugo storyteller moves his head from one side to the other to indicate when a new character is speaking.

Noriko Watanabe, a professor at New York’s Baruch College who studies rakugo, says humour is at the core of the storytelling genre.

“Rakugo is like a sitcom with one person playing all the parts,” Watanabe comments in an article on Baruch’s website.

“It is verbal art and a humorous entertainment at the same time. It’s not just a series of jokes in discrete segments—it’s a continuous story. Rakugo is interesting because when you think about Japanese culture you don’t think about humour—and rakugo is all about humour.”

Sunshine has an extensive kimono wardrobe that varies according to the country he is performing in. For instance, in Canada he wore a maple leaf-printed kimono, and in Scotland, a plaid one.

Sunshine was appointed Cultural Ambassador for the Canadian Chamber of Commerce in Japan and Friendship Ambassador for Japan and the Republic of Slovenia. He appears on three television shows in Japan, and several documentaries about his career have been produced.

As a skilled performer, Sunshine has been wowing both Japanese and non-Japanese audiences, adults and children alike. He performed in Banff and Calgary in late June and will be at the Japanese Embassy in Ottawa on July 2. From there he has two shows in Los Angeles. For a schedule of his world tour, visit: http://katsurasunshine.com