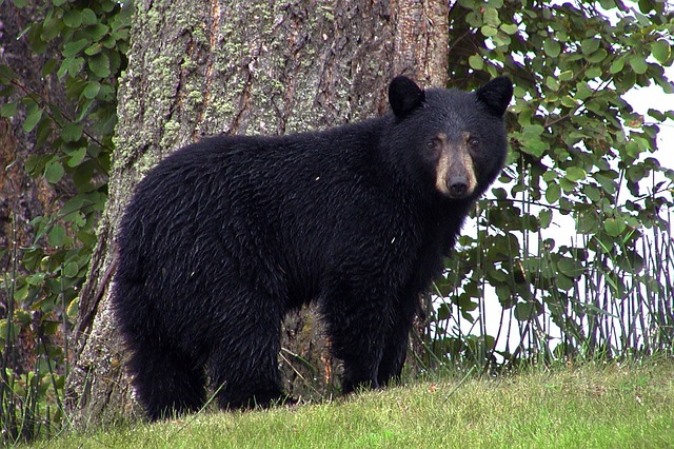 It was a sunny Sunday afternoon in Sudbury, Ontario. Rick Nelson was taking his dog out to a hunting area around Lake Panache, some 70 miles from the Michigan border. He wanted to test how the dog would react to seeing a deer.

They climbed up the back of a rocky ravine, Nelson tied the dog, and sat on a log when a bear cub peeked out of the bush right beside him.

“It let out a yelp, because I scared the heck out of it,” Nelson told CBC News.

He knew he was in trouble right away: “It’s calling for mommy.”

Sure enough, the mama bear was barreling through the brush towards him.

“I had nowhere to go. I had a cliff to my back, I had my dog—I wasn’t gonna leave my dog,” Nelson told Breakfast Television.

He looked for something to use—a stone or stick—but there was nothing.

In that moment Nelson decided to protect his dog with his bare hands.

“It was just an absolute clarity of ‘I got to get between the dog and the bear and here it comes,'” he said.

The bear was ready to swat him.

Nelson used to box in his younger days and still practices with a punching bag.

He took a shot at the bear’s snout. But missed, hitting the teeth instead.

Meanwhile, the bear’s swing came. Nelson tried to doge, but it wasn’t enough.

“I almost rolled out of it, but it caught my front chest,” he said. “He actually pushed me so hard—it caught me off guard.”

The bear wasn’t done though. It came with another hook.

“I knew it would swing first with its left but it would really come with its right, because most bears are right-handed,” Nelson said.

“I had the perfect shot to take. I did an underhand and hit it right in the snout,” he said.

In the meantime, the cub continued to run away along the ravine. It was some 35 yards away and cried out again.

The bear, nose bloodied, looked at Nelson, but then decided to follow its cub.

“It turned around and walked away like nothing even happen,” Nelson said.

This was not Nelson’s first brush with death.

Last year he survived an 80-foot drop over a cliff in his car.

When first responders found him, they thought he was dead.

“I don’t have any answers for that one,” she said. “I didn’t even have a mark on my body.”

How to Handle Bear Encounters

However, they may get attracted by human food, so the government suggests not leaving food outside. Not in garbage cans or on a compost, not even a bird feeder or greasy barbecue grill (bird feeders are ok during winter).

When seeing a bear, one should keep looking at it and slowly back away talking to it in a calm, monotone voice—don’t scream, run, or turn your back to the bear.

If the bear comes very close, one should wave arms and yell, make noise, blow a whistle or an air horn, throw objects, and be ready to use bear pepper spray.

If the bear keeps advancing toward you, stand your ground and use the pepper spray. If that doesn’t help “fight back as if your life depends on it,” the government suggests.

When in remote areas or deep forests, the government also suggests carrying a long-handled axe.

You can only kill a bear in self defense and as a last resort. But if you do, you can keep the bear—you just need to register it with the Canadian government.