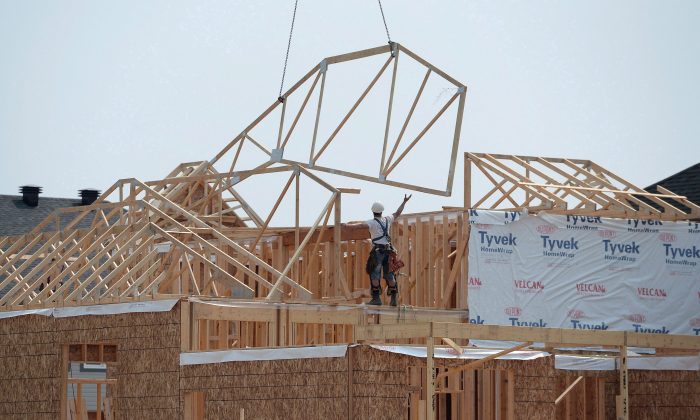 Construction workers build new homes in a development in Ottawa in this file photo. (The Canadian Press/Sean Kilpatrick)
Canada

Home builders in Canada have their work cut out to increase the housing supply and ease the affordability crisis, and industry participants also point to municipal-level cooperation as being critical to the solution.

Home builders’ confidence is growing despite supply chain and labour challenges, according to the first-quarter release of the Canadian Home Builders’ Association (CHBA) Housing Market Index on April 27.

While 80 percent of builders expect to have as many housing starts as they did in 2021—a positive sign in addressing housing shortages—the rest point to permit and approval delays as a roadblock (68 percent) along with lack of land availability (61 percent), according to the CHBA.

“Both point to the important role municipalities play in increasing the housing stock to combat supply and demand imbalances,” CHBA CEO Kevin Lee said in the news release.

The CHBA lauded the federal budget’s allocation of $4 billion over the next five years to the Housing Accelerator Fund (HAF), which aims to support municipalities in building new homes, with a target of 100,000 new housing units over that period.

“As the Fund rolls out, it will be critical that municipalities get onboard with this initiative, as well as related provincial actions,” said the CHBA in an April 7 news release following delivery of the federal budget.

“Municipalities hold the key to unlocking more supply, and with this federal support and incentive, CHBA is hopeful more municipalities will move aggressively to help solve the housing supply shortage and alleviate the housing affordability crisis.”

Mortgage Professionals Canada (MPC) said it has held ongoing meetings over the last three years with parliamentarians to get them to shift the policy focus from attempting to curb housing demand to increasing housing supply. But municipal-level challenges are also on MPC’s radar.

“We foresee some challenges in their successful implementation [government’s housing goals], and expect that to achieve success, provinces must also help to encourage municipalities and allay the fears of small but tactically savvy groups of NIMBY [not in my back yard] residents,” said MPC president and CEO Paul Taylor in an April 8 commentary on Budget 2022.

In discussing its new HAF in Budget 2022, the government said changes are needed to the systems that are preventing more housing from being built. Tackling the housing affordability problem requires all three levels of government, and thus municipalities are going to be incentivized to get more homes built.

Federation of Canadian Municipalities (FCM) president Joanne Vanderheyden also praised the HAF announcement and said in a post-budget statement that it should be designed with municipalities to “directly empower rapid action and results.” The FCM did not respond to a request for elaboration from The Epoch Times.

The feds acknowledged in Budget 2022 that Canada has a lower number of homes per person than many Organisation for Economic Co-operation and Development (OECD) countries. Canada builds about 200,000 new housing units per year and the government says this needs to double over the next decade in order to address affordability challenges and keep up with the housing demands of a growing population.

Canada Mortgage and Housing Corp. (CMHC), which will administer the HAF, said in its 2022 housing supply report released May 3 that housing starts have struggled to keep up with population growth in some large urban centres, especially Toronto.

Apartments dominate construction in large urban centres in Canada, such as Montreal, Toronto, and Vancouver, the national housing agency said, noting that “the various constraints (land, bylaws, etc.) may be more significant” in these cities. In Calgary, Edmonton, and Ottawa, centres of the next level in size, starts for single, semi-detached, and row houses remain strong, it added.

“We are already seeing a record number of units under construction, and the sector is pushing against labour and capacity constraints as it is. This will take a massive effort across all levels of government to achieve, and would likely add to inflation pressures,” said BMO senior economist Robert Kavcic about the Budget 2022 housing initiative in a note to clients on April 7.

Inflation is already at a more-than-30-year high of 6.7 percent.

Despite the CHBA’s optimistic outlook, it reported in its April 27 news release that construction material price increases have added almost $80,000 on average nationally to the price of an approximately 2,500-square-foot home since the start of the pandemic, with half the cost being in lumber alone. The CHBA also said supply chain issues continue to cause average delays of 10 weeks in completing construction.