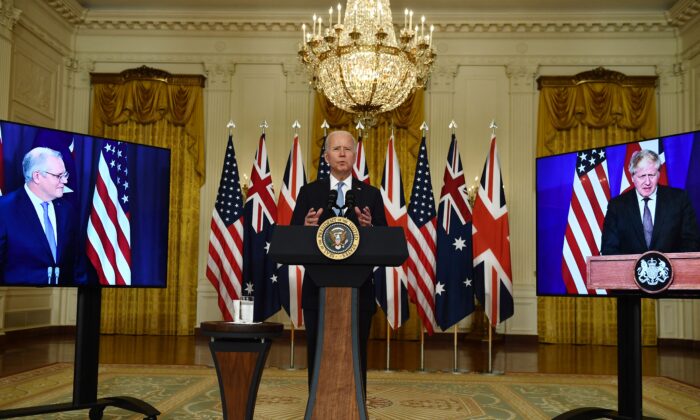 The new trilateral defence pact AUKUS, announced on Sept. 15 by the leaders of Australia, the United Kingdom, and the United States, is widely seen as a snub to Canada for its many shortcomings and missteps in dealing with communist China.

Over the years, foreign policy and defence professionals have been urging Canada to toughen its approach to China, better align itself with U.S. objectives, and get more involved in the Indo-Pacific, a region of rapidly growing global strategic importance, to assist in countering the rising threat from Beijing.

Canada appears to be paying a price for not banishing Chinese telecommunications giant Huawei from its 5G infrastructure. It remains the only nation among the Five Eyes intelligence-sharing alliance—consisting of Canada, New Zealand, and the three AUKUS nations—to have not made a decision regarding Huawei and 5G, despite years of grappling with the issue amid strong U.S. warnings.

The presence of Huawei equipment in a country’s infrastructure could give Beijing potential access to sensitive networks and data that could threaten Canada’s national security, which in turn poses risks to the United States.

In early 2019 at the launch of his book “Claws of the Panda,” China expert and author Jonathan Manthorpe said the United States could potentially stop sharing sensitive information with Canada if Canada deems the Huawei risk to be manageable.

“It could mean the end of the Five Eyes,” Manthorpe said.

A popular view is that the Five Eyes is now effectively morphing into the Three Eyes, with Canada on the outside looking in.

The first thing Canada can do to get on the same page as the United States is to reject Huawei from any involvement in its 5G infrastructure, retired United States Air Force general Robert Spalding told attendees at the Macdonald-Laurier Institute (MLI) annual dinner in February 2020.

“[Canada] not basically having Huawei in their system—I think that’s probably most important near-term,” he previously told The Epoch Times.

Former Canadian ambassador to China David Mulroney tweeted on Sept. 15 that the AUKUS nations have just given Canada a “monumental snub” and “feedback on our virtue-signalling foreign policy.”

“Countries that have become vulnerable by neglecting their own defence are most likely to need alliances and least likely to be included in them,” Mulroney tweeted on Sept. 17 in reference to Canada.

Stephen Nagy, the director of policy studies for the Yokosuka Council on Asia-Pacific Studies and governor for the Canadian Chamber of Commerce in Japan, is urging Canada to consider sustained engagement in the Indo-Pacific, a region committed to trade and development. He also warned about the virtue-signalling misstep.

“Regional leaders find Canada’s progressive values to be fine for Canadian society but they think those values should have no place in Canada’s diplomacy in the region,” Nagy wrote in a commentary for the Canadian Global Affairs Institute.

Richard Fadden, former national security adviser to the prime minister, said during an MLI foreign policy webinar last October that, as part of a foreign policy upgrade, Canada needed to develop a realistic view of itself and the world.

“We cannot have our foreign policy shift materially every time the government changes, and we need a national consensus,” he said.

Canada’s place alongside the United States as a top trusted partner appears less certain than in the past, based on comments made by a senior U.S. government official.

“I just want to underscore, just generally: Obviously, there are no better allies than the United Kingdom and Australia,” said a senior U.S. government official at a White House briefing on Sept. 15.

Being part of the Five Eyes allows Canada to obtain intelligence that it cannot obtain on its own, and now it appears Canada will not be privy to certain information and technology sharing that the AUKUS defence pact will provide for between the United States, United Kingdom, and Australia.

US Warning to Germany to Ban Huawei or Else Also a Caution to Canada, Expert Says

The first initiative under AUKUS is to support Australia in acquiring a fleet of nuclear-powered submarines. The United States and United Kingdom have already had such capability for decades. The new Australian submarines will not be armed with nuclear weapons, the leaders of the three nations emphasized, saying that their nations will continue to meet their nuclear non-proliferation obligations.

Prime Minister Justin Trudeau downplayed the development on the election campaign trail, while his rivals Erin O’Toole and Jagmeet Singh said Canada missed an opportunity to apply pressure on China.

Retired vice-admiral and former chief of naval staff Mark Norman tweeted that Trudeau’s comments that AUKUS is just about nuclear submarines for Australia are “erroneous & misleading.”

“This #AUKUS arrangement is about much more than new #Submarines; it is about information & technology sharing,” Norman tweeted on Sept. 16.

A Canadian official told The Globe and Mail that Ottawa was surprised by the AUKUS developments and that it was clear Ottawa is considered a “weak sister” when it comes to standing up to China.