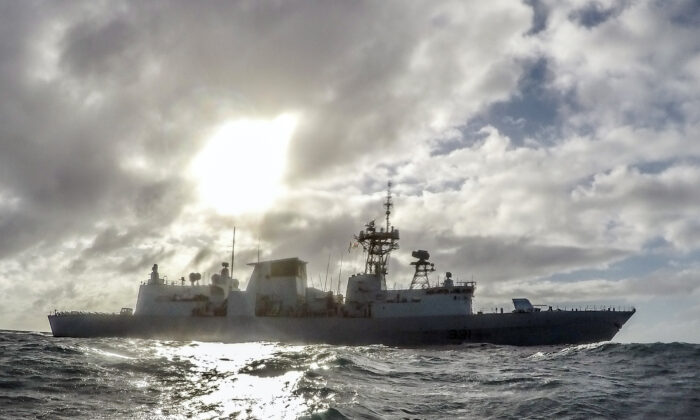 OTTAWA—A reinvigoration of efforts in the Indo-Pacific alongside U.S. initiatives should guide the next iteration of Canada’s foreign policy and defence, experts say.

Canada has to think carefully about what its roles are in the Indo-Pacific in concert with the United States to promote security globally, Robert Spalding, retired U.S. Air Force general and former senior director for strategy at the National Security Council, told The Epoch Times.

“There are two parts to that. One is deterrence and the other is preventing coercion,” Spalding said. “Both of them are important.”

Canada is said to have a ways to go in the face of those mandates. Former ambassador to China David Mulroney described Canada’s foreign policy as “foreign policy on autopilot,” where “flattery often replaces facts,” in a keynote speech at the Macdonald-Laurier Institute (MLI) annual dinner in Ottawa on Feb. 19.

The Indo-Pacific represents the chance for Canada to upgrade its foreign policy—a chance to reset on the Asia-Pacific. And India is a cornerstone of the strategy, as demonstrated by U.S. President Donald Trump’s visit on Feb. 24–25, during which India bought over US$3 billion of military equipment.

Engagement in the Indo-Pacific is a top priority for the Trump administration, as indicated in a State Department update of strategy last November, which pointed to China’s export of repressive practices that “undermine the conditions that have promoted stability and prosperity in the Indo-Pacific for decades.”

Canada’s foreign policy faces a challenge in prioritizing scarce resources, but observing U.S. strategies can provide some guidance and may work to create even better mutual relations.

Mulroney said the Indo-Pacific focus is not about a Sino-American rivalry for supremacy. It’s actually an expression of concern by like-minded nations that care about the rule of law and proper global governance.

“China begins to count heads when it faces opposition, and when there are enough people in the room who are in opposition, they begin to think of things in a different way,” he said during a panel discussion at the MLI event.

“It’s convenient to portray this as a Sino-American battle for hegemony, but it should be portrayed as much more than that and Canada can help.”

Canada has been a valuable member of the North Atlantic Treaty Organization (NATO), and the transatlantic economy has been a success for North America and Europe.

MLI Munk senior fellow for foreign policy Shuvaloy Majumdar said helping shape the transatlantic order has prepared Canada well for the Indo-Pacific. After all, Canada is not only an Atlantic and Arctic nation but also a Pacific one—and the balance of power is shifting toward the Orient.

“For Canada to be successful, we ignore the Indo-Pacific region at our peril,” Majumdar said during opening remarks at the MLI dinner.

India as a Valuable Ally

Canada and the United States have plenty of work to do together on a number of fronts to secure their democracies and assist allies in upholding the rule of law and personal freedoms in the face of rising influence from authoritarian states—primarily China.

The United States views India as a counterweight to China and the Indo-Pakistani border is critical to its Indo-Pacific plans, as it could be an ideal launchpad for U.S. forces.

Gen. Robert Spalding: On the US China Trade Deal, Taiwan Election, and the Huawei 5G Threat

India has boycotted China’s Belt and Road Initiative, and its rapidly growing economy and population of over one billion gives the United States and Canada a valuable ally.

But the challenge of the Indo-Pacific is that it’s difficult for Western militaries to operate there due to separation by vast oceans—an altogether different situation from that in the Middle East and Europe. Canada can be of considerable service—providing refuelling options for naval operations is but one example.

“We have to think differently about how we project power in that region,” Spalding said, speaking on the panel alongside Mulroney. The Chinese military far outpaces what the United States can do in the region.

Indo-Pacific Over the Arctic

Besides the Indo-Pacific, the Arctic is another region where the United States and Canada share similar objectives as allies. Cyber threats and, of course, the matter of Chinese telecom giant Huawei in relation to 5G infrastructure are also challenges for national security that both countries are dealing with.

The first thing Canada can do to get on the same page as the United States is to reject Huawei from any involvement in its 5G infrastructure, Spalding said.

“Probably the most important thing right now is focusing on what’s going on with Huawei and [intelligence] sharing,” he said. “[Canada] not basically having Huawei in their system—I think that’s probably most important near-term.”

The U.K. recently decided to allow Huawei to play a role in its 5G networks and U.S. Secretary of State Mike Pompeo urged the Brits to reconsider.

“It’s going to be a big problem between the United States and Canada particularly in intelligence sharing, and they’ve already said that with the Five Eyes partners, so this is a big issue,” Spalding added.

Beyond that, focus on the Indo-Pacific should take precedence over the Arctic, he said.

While the U.S.-Canada joint North Warning System in the Arctic is badly outdated, Spalding said allies have “plenty of deterrent capabilities vis-a-vis the Russians” but no similar tools in the Indo-Pacific to counteract Chinese or Russian influence.

“I definitely think that prioritizing the Indo-Pacific is much more important than focusing on Russia [in the Arctic],” he said, adding that the Arctic is much more about the U.S.-Canada relationship.

In a speech to the Montreal Council on Foreign Relations on Feb. 21, Foreign Affairs Minister François-Philippe Champagne spoke about the deep transformations and uncertainties the world is undergoing, including rising inequalities, declining human rights, and selective application of international law.

He also acknowledged the shift of direction of global power.

“We also see it with a rise in economic, political, and diplomatic power from the West to Asia,” he said.

Mulroney said that while he’s very concerned about the way forward with China, Canada is fortunate to have the United States as its neighbour; however, Canada needs to gain greater awareness of its international role to guide its foreign policy.

“I think the window is still there … we still have a reserve of goodwill in the world,” he said.