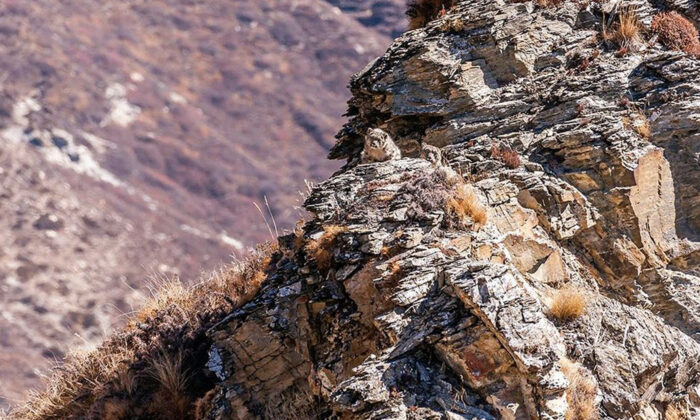 Can You Spot the Snow Leopard Cub Perfectly Camouflaged Beside Its Mom in This Himalayan Landscape Photo?

You won’t have to brave unforgiving terrain and high altitudes to enjoy breathtaking Himalayan landscapes—one wildlife photographer from Nepal is capturing that regal beauty on his camera for the world to marvel at.

Born and raised amidst that region, Tashi Rapte Ghale grew to love photography by practicing on old-model cameras, before later purchasing his professional DSLR. He dreamed of photographing Himalayan wildlife, with his sights set on capturing one elusive species in particular. “I love to photograph snow leopard, its prey species, and its habitat,” he told The Epoch Times. “The landscape where snow leopard live inspires me the most to follow and photograph this apex predator of the mountain ecosystem.

The 51-year-old scientist and semi-pro photographer from Manang takes trips out into the mountains in hopes of spotting the elusive snow leopards. On one outing in January 2018, Tashi was checking a camera trap when he saw a flock of vultures hovering above, and a carcass near a cliff base. Soon, he spotted a snow leopard mom.

But she was not alone.

“It is very hard to capture the snow leopard photographs in the natural habitat due extreme unpredictable mountain weather, logistic difficulties and elusive nature of snow leopards,” Tashi said.

Here’s the photo he snapped of that mom. But can you spot the snow leopard cub hiding somewhere amidst the rocks?

If you need a hint, check out the picture below where we’ve highlighted the cub’s whereabouts:

As recently as Sept. 25, Tashi managed to photograph another mother leopard with her cub—both blending into the side of a mountain.

If you weren’t able to spot the last cub, try this one on for size:

Quite a challenge wouldn’t you say? Here they are:

Tashi says it takes passion in order to track down and photograph snow leopards. Some of the challenges include: the high altitude, cold weather, and the big cat’s elusive nature. Born in a remote mountain village, Tashi said his love for nature was imprinted in his soul.

“For me, photography is not only capturing … nature, plants, animals, landscape, culture, and events, but also the putting of human emotions, perspective, and soul into an image,” he added.

“To me, photography is about making sense of the world …  about finding appreciation in the small things in life.”

Here is one more snow leopard playing hide-and-go-seek in the Himalayas: