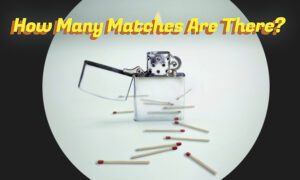 Can You Tell How Many Matchsticks Are in the Picture? How Sharp Are Your Observation Skills?
0
Share Now
FacebookTweetParlerEmail
Copy Link 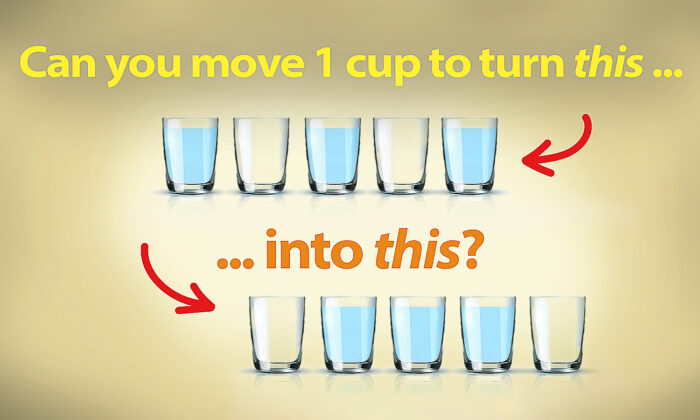 Can You Move Just 1 Cup in the Top Row to Match the Order of the Bottom Row?

If you can solve this mind-bending cup puzzle, you just might be a genius!

Here, we have five cups, all in a row (see the illustration below). The first, third, and fifth cups are filled with water. The second and fourth are empty.

Under this row, there is another row of five cups in a different order (which we want to match). The first and last cups of this row are empty, while the second, third, and fourth are full.

Puzzle: Can you move just 1 cup in the top row to match the order of the bottom one?

Ponder all possible combinations before you scroll down to see the answer. It might seem impossible at first, but with some ingenuity, you might make it work.

When you’ve exhausted all the possibilities, or think you know the answer, scroll down to check the solution.

Move the FIRST cup as demonstrated above, and place it next to the fifth cup.

Yes indeed! To pour is a type of movement, and you’re allowed to move just one cup. By pouring the water into the fourth cup (which was empty) and placing the now-empty first cup on the opposite side, we match the order of the bottom row. That’s thinking outside the box!

But wait; there is a second, alternative answer to this puzzle.

Answer 2: Move the LAST cup in the reverse manner.

You could, alternatively, have moved the FIFTH cup and done essentially the same thing, but in reverse order: pouring the water into the second cup and placing the now-empty fifth cup in front of the first to match the required order.

How did you fare in this brainteaser? We hope you found it as fulfilling as we did!

Be sure to share it with your friends and family members to test their puzzle-solving skills!

All Illustrations by The Epoch Times