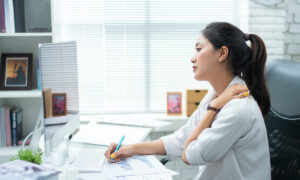 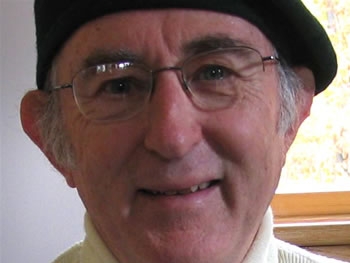 The Camera Eye of James Bosjolie

James Bosjolie has the ability to make a picture tell the whole story. His picture of EcoVillage catches the village from the middle of the central lane going up to the Common House. Cottages on each side of the lane are stacked plum against each other on the brow of a hill. It puts the viewer at the fulcrum.

His composite picture of Sara Pines tells her story: Sara feeds 2, 200 persons each week to eradicate hunger. We see Sara and we see the lines of people waiting at a food pantry.

Bosjolie was adopted by a French couple, and early on he found a paper that suggested that he was part Irish and part French.

One cannot miss Bosjolie’s ancestry: He has the high cheekbones of the Irish and a tendency to be a creative dabbler. And he has the charm-under-a-beret that one associates with the World War II French Resistance.

Of all the forebears, “I look most like Edgar Allan Poe, who was Irish,“ he says. Bosjolie ascribes his love of the arts to his Irish ancestry.

He also belongs to the country that produced the philosophers of the Enlightenment, the French Revolution, and de Tocqueville’s “Democracy in America.” He admits that he has pursued those aspects of his heritage only sporadically.

He started out writing poems, but this being an age of prose narratives, he has chosen to be a storyteller and is a member of the Ithaca Story Tellers Group.

About his early memories, he said, "A steam train is coming on its way to the iron mines. The steam whistle is echoing through the town. I go outside to catch a glimpse of it. I watch the smoke through the trees on the hill. Since then, steam engines have continued to fascinate me.

“I loved mother’s meat pie, ‘Toutecare,’ but I don’t know how to spell it. Being an only child, I spent my time playing in my sandbox. I had fun watching the army of ants emerging from under the plank, till my father said, ‘You are too old to be in a sandbox.’

“A big moment came when I was accepted at Notre Dame University. I majored in education. I don’t remember the books I read except for a play by J. M. Synge: ‘The Playboy of the Western World.’”

I asked what brought him to EcoVillage in 1995. He said, “I had read an article by Joan Bokaer in a now-defunct journal, and Katie and I came up here to take a look. We found a sign—I have a photograph of it. The EcoVillage was still just a gleam in Joan’s visionary consciousness.

“Katie said, ‘I can see myself living here with you.’ That sealed our future. We moved here to experience the spiritual, social, and ecological aspects of cohousing, living close to nature with fascinating people and having great conversations with them.”