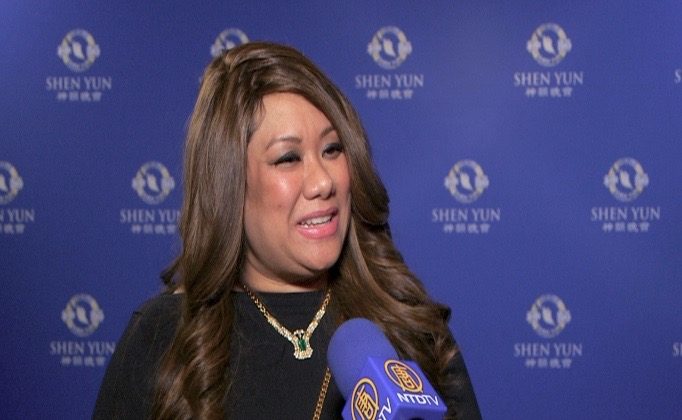 LAS VEGAS—Sathsowi Thay Koroghli and her mother missed last year’s Shen Yun performance in Las Vegas, but they were determined to see Shen Yun Performing Arts when it came back this year, so they bought 100 tickets and treated their friends and family to the show.

Ms. Sathsowi Thay Koroghli said her friends call her Susie, and that her mother is a Cambodian Princess, a daughter of King Sisowath Monivong.

Ms. Sathsowi Thay Koroghli and her guests enjoyed the Jan. 23 evening performance, at The Smith Center for the Performing Arts.

She said her guests loved Shen Yun Performing Arts, as did she.

“Beautiful, it was very beautiful, inspirational,” she said. “We’re really glad that we did this!”

There was a message that touched Ms. Sathsowi Thay Koroghli in the performance.

“It touched something in me also, because no matter what religion you are, it’s about being kind and opening up your mind to learning just to have a nice wisdom about life,” she said.

Shen Yun companies are accompanied by the Shen Yun Orchestra. The “Shen Yun Symphony Orchestra blends the spirit of Chinese music with the power of a Western orchestra. All-original compositions draw upon five millennia of culture and legends. Western strings, percussion, woodwinds, and brass accentuate the sound of ancient Chinese instruments,” says the Shen Yun website.

She added this salute for dancers, “So elegant, the women are so graceful. It was just beautiful.”

“I believe all of my family and my friends enjoyed tonight. We took back a little bit of something with us and also it brought all of us together,” said Ms. Sathsowi Thay Koroghli.

“We wanted to see this show last year but it was sold out. So this year instead, my mother and I bought 100 tickets,” she said. “So it was perfect.”