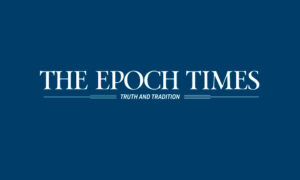 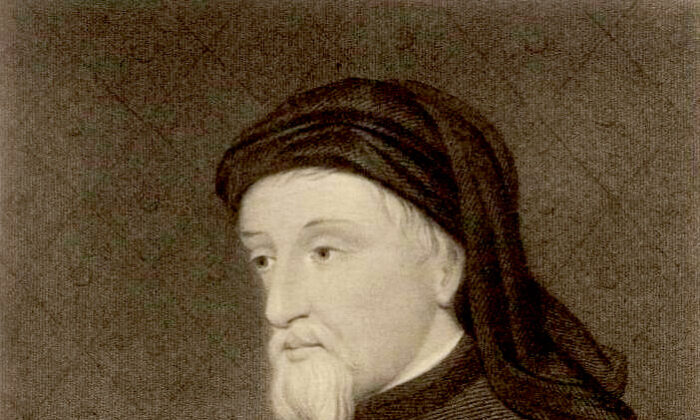 A portrait of the English poet and author Geoffrey Chaucer, from the Welsh Portrait Collection at the National Library of Wales. (Public Domain)
Literature

Calls to Cancel Chaucer Ignore His Defense of Women and the Innocent, and Assume All His Characters’ Opinions Are His

Spying is a risky profession. For the 14th-century English undercover agent-turned-poet Geoffrey Chaucer, the dangers—at least to his reputation—continue to surface centuries after his death.

In his July 2021 essay for the Times Literary Supplement, A.S.G. Edwards, professor of medieval manuscripts at the University of Kent in Canterbury, England, laments the removal of Geoffrey Chaucer from university curricula. Edwards says he believes this disappearance may be propelled by a vocal cohort of scholars who see the “father of English poetry” as a rapist, racist, and antisemite.

The predicament would have amused Chaucer himself. Jewish and feminist scholars, among others, are shooting down one of their earliest and wisest allies. This is happening when new research reveals a Chaucer altogether different from what many current readers have come to accept. My decades of research show that he was no raunchy proponent of bro culture but a daring and ingenious defender of women and the innocent.

As a medievalist who teaches Chaucer, I believe the movement to cancel Chaucer has been bamboozled by his tradecraft—his consummate skill as a master of disguise.

It’s true that Chaucer’s work contains toxic material. His “Wife of Bath’s Prologue” in “The Canterbury Tales,” his celebrated collection of stories, quotes at length from the long tradition of classical and medieval works on the evils of women, as mansplained by the Wife’s elderly husbands: “You say, just as worms destroy a tree, so a wife destroys her husband.”

Later, “The Prioress’s Tale” repeats the antisemitic blood libel story, the false accusation that Jews murdered Christians, at a time when Jews across Europe were under attack.

These poems in particular generate accusations that Chaucer propagated sexist and antisemitic material because he agreed with or enjoyed it.

Several prominent scholars seem convinced that Chaucer’s personal views are the same as those of his characters and that Chaucer is promoting these opinions. And they believe he abducted or raped a young woman named Cecily Chaumpaigne, although the legal records are enigmatic. It looks as though Cecily accused Chaucer of some such crime and he paid her to clear his name. It’s unclear what actually happened between them.

Critics cherry-pick quotations to support their claims about Chaucer. But if you examine his writings in detail, as I have, you’ll see that themes of concern for women and human rights, the oppressed, and the persecuted, reappear time and time again.

Readers often assume that Chaucer’s characters were a reflection of the writer’s own attitude because he is such a convincing role player. Chaucer’s career in the English secret service trained him as an observer, analyst, diplomat, and master at concealing his own views.

In his teens, Chaucer became a confidential envoy for England. From 1359 to 1378, he graced English diplomatic delegations and carried out missions described in expense records only as “the king’s secret business.”

Documents show him scouting paths through the Pyrenees for English forces poised to invade Spain. He lobbied Italy for money and troops, while also perhaps investigating the suspicious death of Lionel of Antwerp, an English prince who was probably poisoned soon after his wedding.

Chaucer’s job brought him face-to-face with the darkest figures of his day—the treacherous Charles the Bad, king of Navarre, a notorious traitor and assassin; and Bernabò Visconti, lord of Milan, who helped devise a 40-day torture protocol.

Chaucer’s poetry reflects his experience as an English agent. He enjoyed role-playing and assuming many identities in his writing. And like the couriers he dispatched from Italy in 1378, he brings his readers covert messages split between multiple speakers. Each teller holds just a piece of the puzzle. The whole story can only be understood when all the messages arrive.

He also uses the skills of a secret agent to express dangerous truths not accepted in his own day, when misogyny and antisemitism were both entrenched, especially among the clergy.

Chaucer does not preach or explain. Instead, he lets the formidable Wife of Bath, the character he most enjoyed, tell us about the misogyny of her five husbands and fantasize about how ladies of King Arthur’s court might take revenge on a rapist. Or he makes his deserted Queen Dido cry: “Given their bad behavior, it’s a shame any woman ever took pity on any man.”

While current critiques of Chaucer label him as an exponent of toxic masculinity, he was actually an advocate for human rights.

My own research shows that in the course of his career, he supported women’s right to choose their own mates and the human desire for freedom from enslavement, coercion, verbal abuse, political tyranny, judicial corruption, and sexual trafficking. In “The Canterbury Tales” and “The Legend of Good Women,” he tells many stories on such themes. There he opposed assassination, infanticide and femicide, the mistreatment of prisoners, sexual harassment, and domestic abuse. He valued self-control in action and in speech. He spoke out for women, enslaved people, and Jews.

“Women want to be free and not coerced like slaves, and so do men,” the narrator of “The Franklin’s Prologue” says.

As for Jews, Chaucer salutes their ancient heroism in his early poem “The House of Fame.” He depicts them as a people who have done great good in the world, only to be rewarded with slander. In “The Prioress’s Tale” he shows them being libeled by a desperate character to cover up a crime of which they were manifestly innocent, a century after all Jews had been brutally expelled from England.

Chaucer’s own words demonstrate beyond the shadow of a doubt that when his much underestimated Prioress tells her antisemitic blood libel tale, Chaucer is not endorsing it. Through her own words and actions, and a cascade of reactions from those who hear her, he is exposing such guilty and dangerous actors as they deploy such lies.

And was he a rapist or an abductor? It’s unlikely. The case suggests that he might well have been targeted, perhaps even because of his work. Few authors have ever been more outspoken about man’s inhumanity to women.

It is bizarre that one of the strongest and earliest writers in English literature to speak out against rape and support women and the downtrodden should be pilloried and threatened with cancellation.

But Chaucer knew that the complexity of his art put him at risk. As his character the Squire dryly observed, people all too often “demen gladly to the badder ende”—“They are happy to assume the worst.”