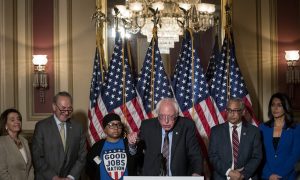 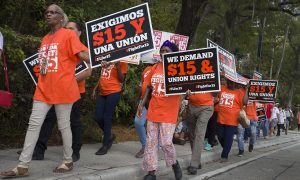 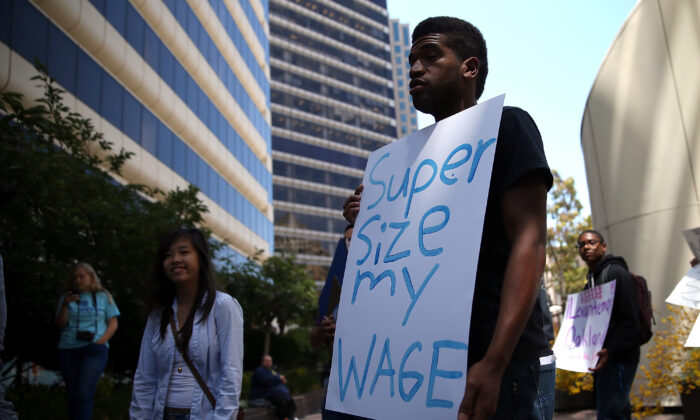 Protestors stage a demonstration outside of the Oakland Chamber of Commerce in Oakland, Calif., on July 8, 2014. (Justin Sullivan/Getty Images)
Southern California

As California enters its fourth year of a phased minimum wage increase, industry leaders and experts continue to express a variety of perspectives on its value and impacts.

Beginning Jan. 1, 2020, the minimum wage for all employers with 26 or more employees will increase to $13 per hour. Employers with 25 or fewer workers must increase their hourly wages to at least $12.

This seven-year plan is intended to ultimately increase the minimum wage across the state to $15 per hour by the year 2022.

“I think it’s worked out tremendously,” Steve Smith, spokesperson for the California Labor Federation, told The Epoch Times. “We’ve seen a lot of workers at the bottom end of the wage scale have their living standards lifted as a result of the minimum wage increase.”

Smith referred to the phased minimum wage increase as a “critical step” toward allowing workers better opportunities to make a living, especially with the high cost of living in California.

“We have long supported minimum wage increases,” he added. “In absence of any action at the federal level, we felt that California needed to take the matter into its own hands.”

“A similar lockstep wage increase doesn’t make sense for businesses here,” Robert Nash, the director of government relations for American Pistachio Growers, told The Epoch Times. “The cost of living here is not [the same as] the Bay Area or Los Angeles.”

Nash says as the minimum wage increases, agricultural industries are moving even further toward the mechanization of certain jobs.

“We’re seeing is a loss of jobs, or at least a push to figure out a cheaper way to do business,” he said. “The growers can’t afford to pay their employees the overtime associated with the minimum wage increase. So they’re cutting hours and people are taking less home, which, I think, is the opposite of what the intent of the bill was.”

According to Nash, this may have been one of the reasons that the nonprofit trade association American Pistachio Growers initially opposed the bill before it was signed into law by Gov. Jerry Brown in 2016.

Meanwhile, many others say the law doesn’t impact the wages they pay because they already offer a higher hourly than the state mandates.

Bruce Wick, the director of risk management at California Professional Association of Specialty Contractors (CALPASC), says this was the central reason why CALPASC was neutral on the issue.

“Our members don’t pay anywhere near minimum wage. They pay much more than that,” Wick told The Epoch Times. “The minimum wage debate didn’t affect our contractors that way.”

“In the citrus industry, we generally … pay well above minimum wage at the field level and in the packing houses,” Alyssa Houtby, the Director of Government Affairs at California Citrus Mutual, told The Epoch Times.

Houtby says a harvester can earn a base rate of $22 an hour, while the starting rat for an hourly employee at packing houses can vary.

She said the incremental increases in labor costs are the main reason that California Citrus Mutual opposed the minimum wage increase to begin with.

Mikey Navarro, the manager at Alfred Coffee Melrose Place, said the company offers starting employees “whatever the next [phase] will be. We start at $13.50. For the past couple years, we’ve stayed ahead of the trend.”

“Ultimately, we haven’t really suffered much from the higher minimum wage largely because labor markets are so damn tight it’s not a true price floor in most industries,” added Christopher Thornberg, Director at the Center for Economic Forecasting at UC Riverside. “I don’t pay anybody in my company anywhere close to minimum wage — so it’s irrelevant, right? It doesn’t matter much. And I think that’s true for most of the economy.”

“This is what minimum wage hikes do every single time,” he said. “The problem is that we have a whole cottage industry of people on the left who aren’t willing to acknowledge that there is a downside to the minimum wage … They have created an entire line of research based on politics, not academics.”

One reservation expressed by Thornberg echoes Robert Nash’s concern over the economic realities of different regions in a state that represents the world’s fifth largest economy.

“The negative impact of minimum wage [increases] is ultimately going to be determined by the level of wages within the local economy,” Thornberg added. “New York state got this when they passed their minimum wage. They had a higher minimum wage in New York City than they had in Buffalo, New York — that’s just logical.”