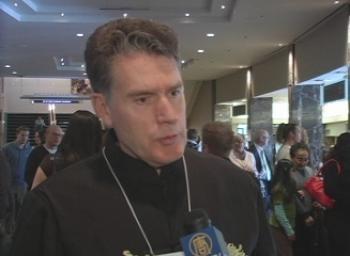 Calgary MLA: Shen Yun ‘is giving the world a gift of peace, a gift of art, a gift of culture’

“It is wonderful. As a former school teacher, I would rate it A-plus. The costuming is wonderful, and the dance. Trying to put 5,000 years of history into a couple of hours is quite a challenge but it’s been achieved today,” he said.

The celebration of traditional Chinese culture is at the heart of the Shen Yun shows, something Mr. Chase appreciated.

“What I see is an emphasis on art, culture, and tolerance. This is a very important weekend for Christians and Jews. My son-in-law is a Hindu, and they were celebrating yesterday. The idea of culture, tolerance, and trying for perfection is very important in all cultures, and that’s what I see being portrayed on the stage today.”

Having studied martial arts in the past helped him enjoy the show even more because it “sort of brought back memories,” he said.

“What I am enjoying thoroughly is the culture, and I very much enjoy the connection between martial arts and cultural arts. In my past life I have taken Kung Fu, and one of the reasons I enjoyed that martial art was the circular movements and the cultural aspect of it. It was more than just a fighting art, there was a dancing and a cultural art to it as well.”

Shen Yun is a New York-based dance and theatre company that seeks to revive ancient Chinese culture through the performing arts. Shen Yun is currently on an extensive world tour, spanning about 80 cities on four continents.

In conclusion, Mr. Chase extended his thanks to the performers “for bringing this gift to the province. We are very appreciative of what we are seeing today.”

After three shows at the Jubilee on Sunday and Monday, Shen Yun will play in Edmonton on April 15 and April 16 and in Regina April 19.