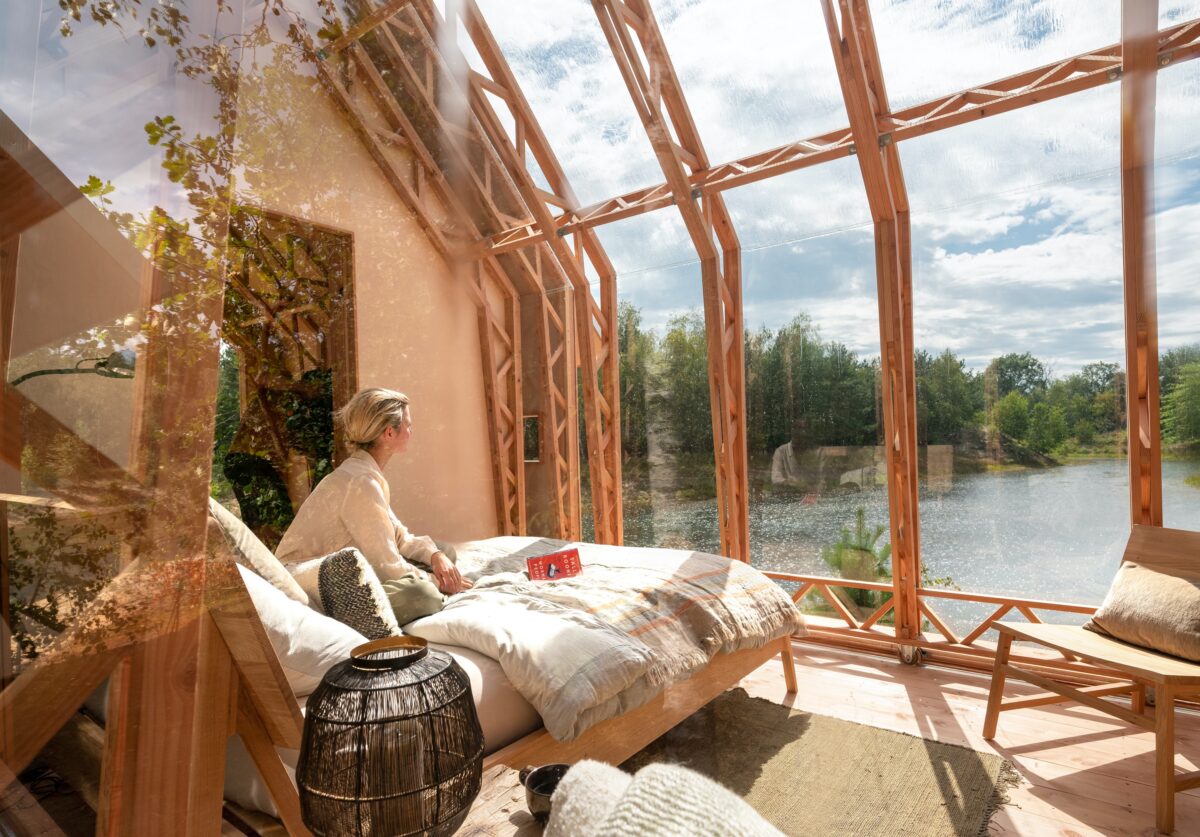 Architects commonly find inspiration for their buildings by visiting cities, viewing artworks, and learning from their predecessors and contemporaries. But Dutch designer Caspar Schols, who designed the award-winning Cabin ANNA—a fully inhabitable house, sold as a flat-pack that can be built and rebuilt anywhere—was inspired by nature.

Schols says that one of his goals in designing Cabin ANNA was to “create a dynamic connection between man, nature, and home.” Cabin ANNA features sliding walls—removing the barriers that have traditionally separated the home and its occupants from nature.

Sleeping Under the Naked Sky

Although it’s not always easy to identify a single experience that leads to a personal breakthrough, Schols has traced his idea to a cherished childhood memory.

The Schols family spent their summers at a small house in Southern France. “One night, my parents took us out into the fields to sleep under the naked sky,” Schols told Radiant Life. “I slept with my parents on one side and my three older brothers on the other side.” Schols felt safe, he said, but also slightly terrified. “The noises, the wind, the incredibly bright stars—they were so bright, I felt as if I could almost touch them.” He remembers hearing branches cracking in the night, “and I wondered whether an animal was close by. I could smell the fresh and sometimes strange scent of plants and animals nearby.”

In the morning, when the first rays of sun reached over a hill to the east, Schols, his parents, and his brothers awoke one by one. “We heard the sounds of birds and insects getting louder and more numerous,” he says. “We just lay there, talking quietly about the night, and what everyone experienced.” Then, his parents took them to a nearby bakery for breakfast.

In 2016, after earning a physics degrees from the University of Amsterdam, his mother asked him to build her a garden cabin. Armed only with fascination for architecture and design, and with no formal training, he began searching for a building concept to create a dynamic connection between man, nature, and home.

“I inherited a wish to be connected with my mother, Anna Ruys,” Schols says. “She is always open to connect to nature and everything and everyone around her.” Schols’s vision included a flexible space where his mother could read or paint, and could “organize family dinners, and where her grandchildren could give theater performances,” he explains. “But above all, the cabin had to bring her closer to nature.” The cabin he created is called “Garden House.”

The cabin received worldwide attention after an article about it was published in Dezeen, one of the world’s foremost design magazines. The Garden House was nominated for several awards including the Dirk Roosenburg Award, in Eindhoven, Netherlands, the Radical Innovation Award, in New York, and the Dezeen Small Building of the Year Award, in London.

Schols was subsequently awarded an educational scholarship at the Architectural Association in London, where he further developed his work into the ANNA Origin concept.

In October 2020, Schols and his team shared Cabin ANNA with the world, and in 2021, the ANNA Stay cabin won the Architizer A+ Awards Project of the Year Award. For Schols and his team, the prize validated their beliefs. “It also means support in our journey, which makes it easier to get funds to develop new concepts,” says Schols.

“It All Started With a Project for My Mother”

Schols and his team have developed a new model that has double glazing, thicker insulation, and stronger trusses, making it suitable to be built virtually anywhere on Earth. While Cabin ANNA isn’t yet available in the U.S., the team expects to build a limited number of units during the fourth quarter of 2022. Prices will begin around $183,909.

The new ANNA Stay model will soon be in production, and the first will be placed in Nature Reserve De Biesbosch, one of the few freshwater tidal areas in the world, in the Netherlands. “We worked on this model for a full year,” Schols says. “The process is exciting, but also tough. There is a lot at stake, a lot of money involved. The development goes with a lot of sleepless nights, long hours, and sometimes despair for the team.”

But it’s all worth it in the end. “My dream,” Schols says, “is to place an ANNA in every remote corner of the world, so they become a sweeping project that forms a catalog of Planet Earth. An alien traveling from outer space to our planet would only have to travel from ANNA to ANNA to understand the diversity and beauty of our home planet.

“It all started with a project for my mother, which gave me the freedom to experiment in a way that my mother fully understood,” adds Schols.