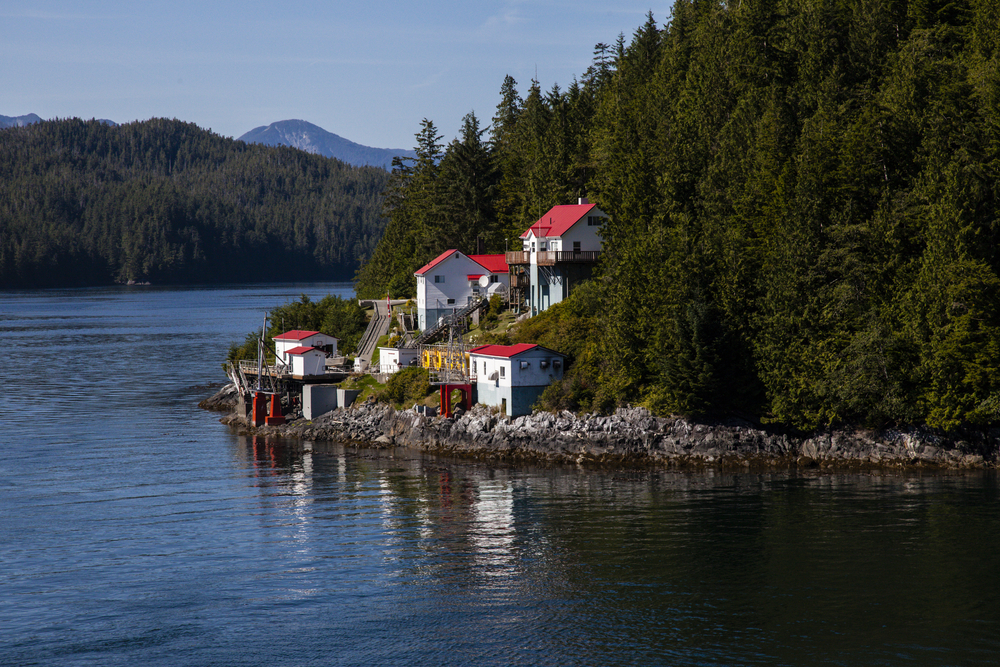 A fishing village along Alaska's Inside Passage. (Richard Seeley/Shutterstock)
Travel

By Ship and Plane Across Alaska’s Inside Passage

Alaska is one of those places that looms large in the collective imagination of visitors.

There are several reasons for this, including its history—especially the way in which it became the union’s 49th state. After all, it is entirely possible that it could have remained outside the United States had one or two moments in history gone differently. Then there is the mystique that comes with the state’s vast geography and its detachment from the contiguous 48 states.

Earlier this summer, I went north and crisscrossed the Inside Passage, an archipelago in the panhandle of southeast Alaska.

My trip started in Juneau.

One of only two state capitals not accessible by car, Alaska’s capital is vastly underrated. Outside of the big cruise ships, which returned in late July for the first time since 2019, most tourists seem to use this as a base for going elsewhere. Yet, as I found, Juneau is a destination in its own right.

Located on the mainland’s coast at the Gastineau Channel, there is more than enough to do and see for two or three days. Think glaciers, including Mendenhall Glacier; mountain peaks; trails; and even whale-watching boat excursions. For a good lay of the city, take a walking tour from Juneau Food Tours, which combines sightseeing with food and drink experiences. The eight stops include Tracy’s King Crab Shack and the saloon within the Alaskan Hotel, which is listed on the National Register of Historic Places. Another must is the State Museum, one of the country’s better state museums.

Leaving Juneau, I traveled about seven hours by ferry on the Alaska Marine Highway System to Skagway. Along the way, I saw pristine landscapes and fjords as spectacular as anything in Norway.

Skagway’s only real reason for existence is the Klondike gold rush of 1896 to 1899, when fortune seekers arrived here only to trek a further 500 miles to what is today part of the Yukon Territory in Canada.

The town is a remarkably well-preserved example of the boom towns once seen across the American West. So much so that it feels like an old prospector will stumble out of the landmark Red Onion Saloon after one too many drinks.

Despite all the preserved buildings, including those belonging to the Klondike Gold Rush National Historical Park, this isn’t a ghost town or amusement park. Real people actually live and work here, including at the old-school hardware store. Besides the park, which includes a very informative museum, popular things to do include hiking the Chinook Trail; a half-day trip to Dyea, a vanished town that once rivaled Skagway; and riding the narrow-gauge White Pass & Yukon Route Railway, the only land route out of town until construction of the Klondike Highway in the 1970s.

Back down the Inside Passage is Sitka on Baranof Island.

Under the Russians between 1799 and 1867, this town of 8,881 souls was called New Archangel and served as the capital of Russian America until the United States purchased Alaska in 1867. Originally ridiculed as Seward’s Folly—William Seward, secretary of state under Presidents Abraham Lincoln and Andrew Johnson, oversaw the acquisition—it ended up being one of the all-time greatest speculative real estate transactions. The cost? $7.2 million or about 2 cents per acre.

While much has changed since the Stars and Stripes was first raised, the Orthodox Cathedral of St. Michael the Archangel still towers over the quaint downtown. What stands today is an exact re-creation of the original 1800s edifice that was destroyed by fire in 1966. Other sights and attractions include the Sitka History and Sheldon Jackson museums; a remarkable collection of old and new carved Tlingit totem poles at Sitka National Historical Park; several landmarks from when the czar ruled Alaska; and Castle Hill, where the 1867 transfer ceremony between Russia and the United States occurred.

Fly into Juneau (TravelJuneau.com), which is served year-round by Alaska Airlines and seasonally by Delta Air Lines. Consider staying at Alaska’s Capital Inn (AlaskaCapitalInn.com), a quaint bed-and-breakfast about a block from the nondescript State Capitol.

Getting to Skagway (Skagway.com) is easier since visitors can reach it by car, ship, and air. While taking the Alaska Marine Highway System ferry was a unique experience, I thought my round-trip journey took way too much time. I could have saved considerable time by flying. Stay at the family-owned Skagway Inn (SkagwayInn.com), which has operated as a boarding house, brothel, private residence, and inn since first opening in 1897. As an alternative to the sightseeing train, consider a three-hour private tour to the summit of White Pass from Billi Clem, a colorful local character who runs Klondike Tours (KlondikeTours.com).

Sitka (VisitSitka.org) is best reached by air, although the state ferry does stop here. The Sitka Hotel (SitkaHotel.com), located in the heart of downtown, offers modern, well-appointed rooms.