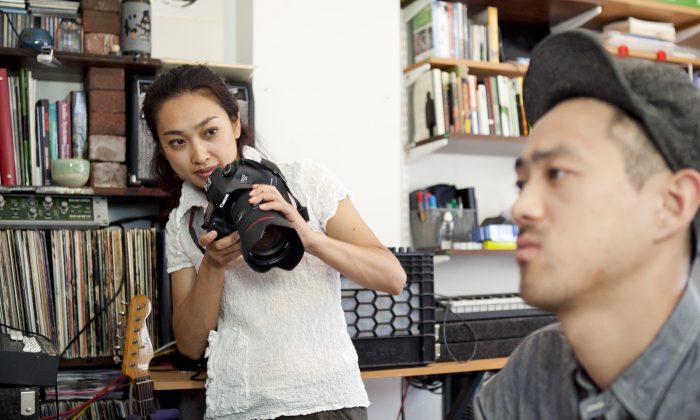 By Capturing Others’ Dreams, Realizing One’s Own

NEW YORK—Since arriving alone in New York on Jan. 20, 2008, Misaki Matsui has taken a photo every day as part of  her photography, which she calls “no moment without hope.”

Hope is the feeling that underlies all her work, no matter what projects she begins. With this hope, she has made a place for herself in the art world as a portrait and landscape photographer.

Whether she shoots people or places, her images are awash with wintry colors that could have sunken into melancholy but instead sing with quiet strength.

Matsui, hailing from Kobe, Japan, uprooted her life as a marketing planner, and like so many other aspiring artists, came to the big city to begin an uncertain journey. Unlike most other artists, though, her dream is partially a study of the dreams of others.

This year is Matsui’s sixth living in the United States and it is a busy one.

One project, “Back to California after 100 Years,” which traces her ancestors lives as temporary immigrants, landed her a lecture last month at the Japanese American National Museum in Los Angeles—the first presentation she’s ever given in English.

Another, just this June, featured photographs that parallel Californian landscapes with Japanese ones at a solo exhibition at the Consulate-General of Japan in New York.

The Dream in Every Artist

One particularly captivating project of Matsui’s is called New Yorkers with a Dream.

She shoots portraits of artists at their craft—designers, craftspeople, dancers, actors, and musicians.

“The common point is that they keep following their dreams,” she said. “I am trying to gather a lot of types of people from all over the world who come to New York.”

She shoots them in their work environments and for free. Most of the artists don’t have natural photos, which they occasionally need for interviews, Matsui said. So she provides them with these photos and they agree to participate in her project.

“Of course, this is New York, so I have a lot of artist friends who have great presence. I thought it would be interesting to take their photos when they are making something or practicing in the process of following their dreams.”

No matter what their medium, in shot after shot, the subjects have eyes fixed on their creations, lips parted in concentration. Even in action shots, Matsui captures a sense of meditative calm—one which is only present when an artist is in a state of flow.

So far, she has shot 44 artists. Her aim for this project is to photograph 100 artists.

When Matsui arrived she barely knew anyone, but now, she calls all these artists her friends. It was tough at first.

“I emailed a lot,” she said, laughing. “I don’t hesitate to see new people.”

The arts are in Matsui’s blood. Her mother was an oil painter; her grandmother taught Japanese brush painting. Unbeknown to her until recently, her paternal grandfather played violin and did photography—two vocations she’s adept at herself.

“When I was a child, I was always drawing, so naturally I was always interested in visual art. But because of the way some people in my parents’ generation thought, I had to go to a regular university and study economics.”

Matsui did well in business and became a marketing planner in Tokyo and Osaka.

“But deep inside I was thinking about visual arts,” she said. Photography was only a hobby.

It was not until 2007 when an event in her personal life made her rethink her path. After a lot of thinking, she decided it was time to follow her true passion.

Within a few months, she had moved to New York, a place she knew would embrace her in her tenuous first steps in a second career.

“Because Japan is a very conservative society, I thought that it was hard to start a different career from scratch. So I thought it was better to move to New York because here, people don’t care about age, or background, or [previous] career.”

Yes, New York loves dreamers. But dreamers can’t forget the importance of getting in front of people.

“Meeting directly is very important,” Matsui said. “Email is convenient, but I cannot feel the person’s presence by email. That’s why I’m always going somewhere to see someone. In New York, everything and everyone is moving, so a lot of miracles are happening everywhere.”