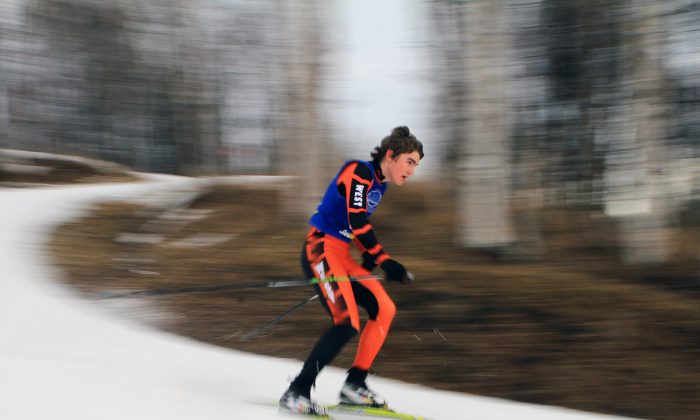 By Alaska Standards, 29 Below Zero Equals a Warm Winter

By cold, residents mean 40 below zero. The daily high temperature has dropped south of minus 40 in all but 10 of the last 85 years. Surviving such cold allows you to call yourself a real Alaskan and retain bragging rights over more balmy U.S. locations, such as, say, International Falls, Minnesota, the self-proclaimed “Icebox of the Nation.”

“I walk 2 to 3 miles every single day and the coldest I’ve ever seen it was 28 below,” she said. “And that was like one time. It always seems to be about 10 to 15 degrees. You don’t really get out your winter gear.”

Supporters of the World Ice Carving championships, which runs through Thursday, fretted that temperatures could climb above freezing this week, threatening the spectacular sculptures.

The coldest temperature recorded this winter in Alaska was 47 below zero on Dec. 24 and 25 at Arctic Village, a community 290 miles north of Fairbanks. That’s unprecedented, said Rick Thoman, climate sciences and services manager for the National Weather Service in Fairbanks. Alaska has had at least one reporting station at 53 below or colder every year in the past century, Thoman.

“Many places, the lowest winter temperatures are going to be at or near records,” Thoman said.

Off Alaska’s west coast, ice in the Bering Sea—which grows and spreads south from the Bering Strait—finally reached St. Matthew Island, 370 miles southwest of Nome, just last week. That should have happened weeks ago.

South- and east-facing locations near the Gulf of Alaska have seen plenty of precipitation, but the state’s largest city, Anchorage, set a record Feb. 19 with 37 consecutive days without snow. And what previously fell melted, leaving the city officially snowless on Feb. 29, National Weather Service forecaster Christian Cassell said. Anchorage finally got 1.7 inches Friday.

The lack of snow in a place synonymous for loads of it has led to unusual measures in Anchorage. During last month’s state high school cross-country ski championships, athletes raced on machine-made snow. On Thursday, a train from Fairbanks brought imported snow to supplement stored snow for Saturday’s ceremonial start of the Iditarod sled dog race.

The warm winter and lack of snow have ramifications for more than the Iditarod and Alaskan’s hearty image. The state has already seen two wildfires ahead of the usual May start of the season. Officials are warning residents to prepare for a robust fire season.

The current warm and dry conditions are a reflection of weather, not climate change, Thoman said.

The Pacific Blob, a mass of exceptionally warm water detected in the North Pacific in 2013, has morphed into a classic positive Pacific Decadal Oscillation pattern, Thoman said. That’s the pattern of above- or below-normal sea surface temperatures that resembles the El Nino effect but can last two to three decades instead of one to several years.

“The upshot for Alaska is, this is three winters in a row with warmer-than-normal sea surface temperatures near-shore,” Thoman said.

The warm winter has had an upside for tourists viewing the aurora borealis. It’s been a spectacular year for viewing northern lights, and visitors didn’t have to suffer to see them, Geiger said.

“It makes aurora viewing sort of luxurious,” Geiger said. “If you’re waiting for the aurora at 15 above instead of 15 below, that’s a bonus, right?”