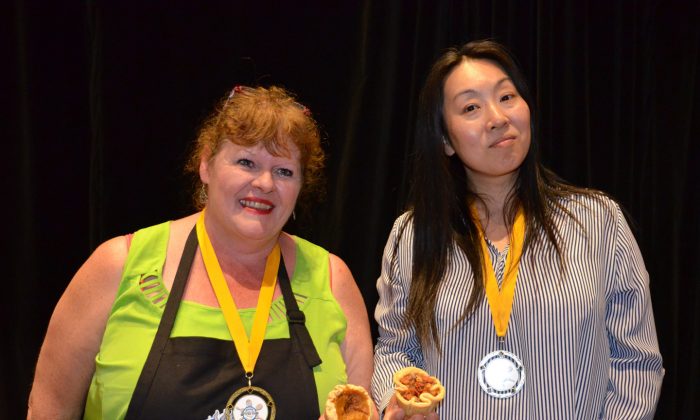 Winners of the Best Butter Tart Festival and Contest are Diane Rogers of Doo Doo’s Bakery in Balieborough (L), who won in the professional division with her pumpkin butter tart, and Hisako Niimi of Ottawa who took first place in the home division with her banana-bacon-peanut butter entry. (Parm Parmar)
Canadian Content

Butter tarts have long been considered a quintessential Canadian phenomenon, inspiring discussions and debates as to what makes the perfect butter tart. Should it be runny or firm, with raisins or currants, walnuts or pecans, vinegar or lemon?

It’s definitely a matter of taste, so all depends on the baker’s preference. Our Canadian tart probably evolved from the Scottish tart that is actually a pie and uses currants. Scots have been making this pie since before Robbie Burns was born and it’s called Ecclefechan Butter Tart.

Canada’s love of this delicious treat has now led to tours aptly named the Butter Tart Trail in the township of Wellington North and the Northumberland Butter Tart Tour in the Kawarthas.

True devotees of this Ontario tart were able to satisfy their sweet tooth at the Best Butter Tart Festival and Contest, held June 20 at the Midland Cultural Centre’s Rotary Hall. This was the third annual festival and Midland’s King Street was lined with 134 vendors, all selling butter tarts.

I attended this festive occasion as one of the judges for the “home-baking division.” Donning aprons, I and the other judges sat at long tables tasting and scoring each butter tart that was placed in front of us. This year’s categories allowed bakers to experiment with different ingredients. So when I’m presented with a Ham Brussel Sprout tart—well, I’m intrigued.

Other notable flavours included Spiced Blackcurrent Cranberry, Gluten-free Skor with Caramel Drizzle, and even one with black forest cake. My fellow judge, cartoonist Michael Deforge, joked that this could be called the “peacekeeper tart”—an amalgamation of Canadian and German ingredients.

By the end of the judging period we had tasted over 25 different butter tarts.

Apparently over 80,000 butter tarts were consumed by the thousands of attendees—much to the delight of Barb Rowlandson, who was the brainchild behind the Butter Tart Festival. Rowlandson got quite emotional in her closing remarks, commenting on how well the community pulled together to help create this wonderful festival.

So who won? Diane Rogers of Doo Doo’s Bakery in Balieborough won in the professional division with her pumpkin butter tart. She also won in this division last year.

In the home division, Hisako Niimi of Ottawa took first place with her banana-bacon-peanut butter entry—an interesting mix of flavours.

Judging by the high number of vendors and the enthusiasm of the attendees, Midland’s butter tart festival has become a very popular event. Next year’s event will be even bigger, according to Rowlandson.

Parm Parmar is a lifestyle, travel, and food writer based in Toronto. Connect with her on twitter @parmiep, Instagram @parmp, or via her blog Planet Blue Adventure at planetblue adventure.com