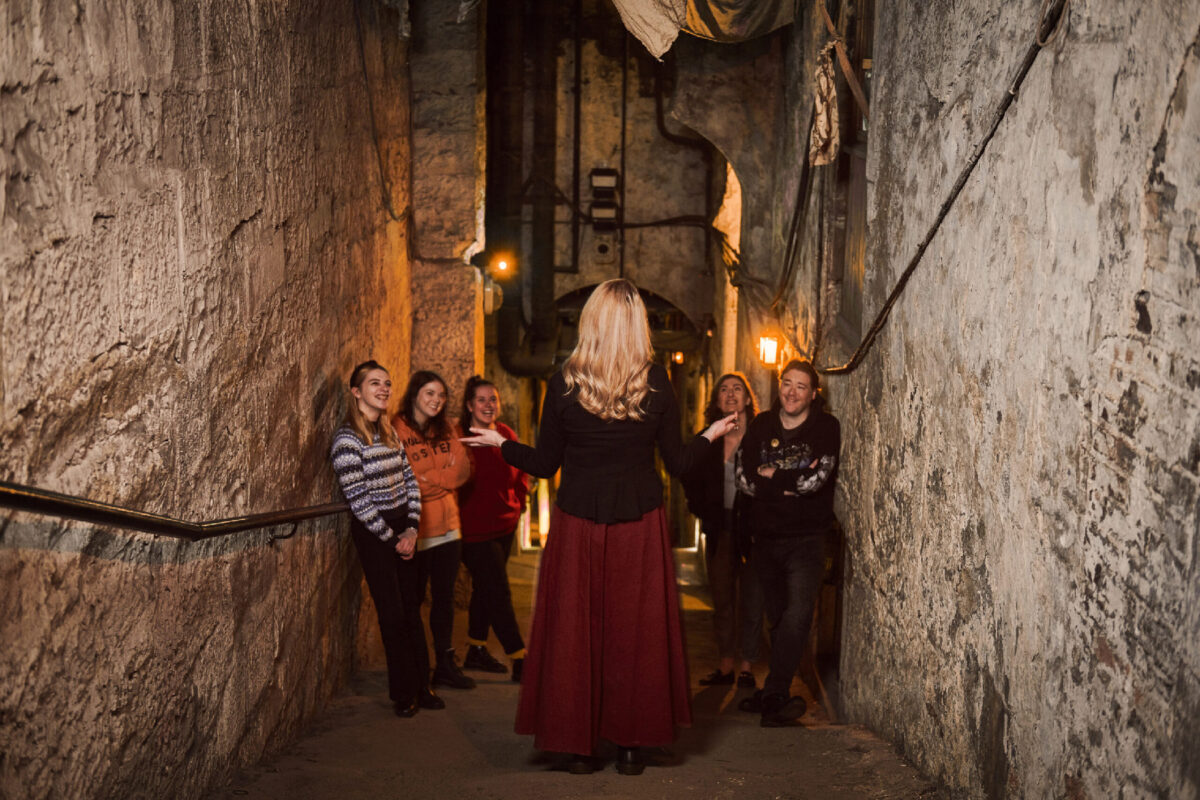 The year is 1645. The most virulent strain of the bubonic plague has immobilized Edinburgh, Scotland, claiming the lives of more than half of the city’s population. The area hardest hit: Mary King’s Close on High Street, a lively 17th century thoroughfare of pubs, shops and residences named for a merchant burgess who lived here at the time. Cries of suffering have replaced the friendly chatter as the stench of death has the pleasant aroma of tea and scones.

The place, the time and the horror have been resurrected as one of Edinburgh’s most unusual attractions. Archaeologically and historically accurate, the alleys you walk upon, the rooms you visit, the stories you hear are real. This is not a re-creation; it is a resurrection of what existed centuries ago.

Beneath the City Chambers on Edinburgh’s famous Royal Mile, Mary King’s Close is a series of narrow, winding side streets with multilevel apartment houses looming on either side that has been hidden for many years. In 1753, the houses at the top of the buildings were knocked down to make way for a then-new building. Parts of the lower sections were used as the foundation, leaving below a number of dark and mysterious underground alleyways steeped in mystery — and misery.

Reconstructed as it was then — though without any contagious aspects — the Real Mary King’s Close provides amazing insight into a period of history with which many are totally unfamiliar. It has been preserved in an authentic environment and historically accurate depiction that defies most “commercial” historical reproductions.

It is eerie to meander up and down along dark, circuitous unpaved passageways past room after room, each with its own story to tell — a projection of people who lived here in the mid-16th to19th centuries.

The inhabitants — ranging from those gracing a grand 16th-century townhouse to plague victims of the 17th century to the third-generation saw-makers who departed in 1902, when the last section was finally interred — are not composites of might-have-beens; the lives recounted are based on real people gleaned from primary documentation preserved in the Scottish Office of Records.

Lighting conveys the supernatural nature of the attraction as much as the narrative. Only “practicals” — original methods of lighting the dwellings — are used, re-creating the actual lighting conditions of the 17th and 18th centuries. Candlelight illuminates one room, while the glow of firelight casts its spell in another. A single low-watt lightbulb brings others into hazy focus.

Rounding one curve reveals a large window, lit by a gloomy, greenish, unhealthy light. A doctor emerges, tending to bedridden figures who are covered with sores, boils and diseased skin. It’s the home of John Craig, a gravedigger who has already succumbed to the “visitation of the pestilence,” his body awaiting “collection.”

The doctor is lancing a boil on the eldest son, Johnnie, with a hot iron to seal and disinfect the wound. Repellant odors arising from the family chamber pot filled with vomit provide a little more “reality.”
And therein lies the tragedy of Mary King’s Close: Much of its history parallels that of the plague. The epidemic struck its residents fiercely. As the deaths rose, the bodies accumulated outside to be carried away by those designated to perform the loathsome task. Mary King’s Close was a pariah in the neighborhood, and ultimately it fell victim to its own diseased fate and disappeared.

With more than two dozen stops along the tour path — each accompanied by an intriguing bit of personal history — I became intimately acquainted with the residents who lived there. All of their stories — some enthralling, others bizarre — are authenticated by original documentation.

Edinburgh native Jennifer West is awed by this backyard discovery.
“This really brings to life all the stories I’ve heard over the years about this part of the city’s history,” she said. “It’s hard to grasp that these underground chambers were once bustling street-side shops.”

One of the most important — and saddest — among a multitude of rooms that witnessed much sadness is one in which 8-year-old Annie died of the plague in 1645. A Japanese psychic, visiting in 1992, could barely enter the room because of all the misery she felt there. As she turned away, she claimed to feel a tug at her leg. Annie, in rags with long dirty hair, was standing by the window, crying because she had lost her family, her dog and her doll. The psychic brought Annie a doll to comfort her — and people from around the world have been leaving trinkets and toys ever since.

Keychains, jewelry, dolls and stuffed animals line the walls as a shrine to the sad child who has long since passed away.

“What a sad story!” lamented 10-year-old Harriet Peterson, visiting from London. Then she added the small stuffed teddy bear she was hugging to the other offerings.

There was a lot of life lived within these buildings — and a lot of lives were lost. It was one of the most fascinating and unique walks through history I’ve ever taken, and it stayed with me even as I explored the many other more traditional sites of historic Edinburgh.

WHEN YOU GO
For more information: www.realmarykingsclose.com