Bulgarian Ambassador to Sweden: ‘An Honour to See Shen Yun’ 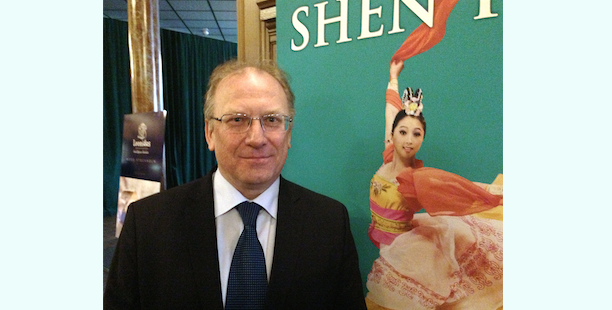 STOCKHOLM, Sweden—”I felt really honored to sit in the audience and watch it. You could feel that this is something they’re doing with love,” said Svetlan Stoev, Bulgaria’s ambassador to Sweden, after attending the Shen Yun Performing Arts show in Stockholm on April 6.

According to the Shen Yun Performing Arts website, the dance and music company was founded by people who “came together in New York with one wish: to revive the true, divinely inspired culture of China and share it with the world.”

The ambassador appreciated the show very much. “I’m very impressed, frankly speaking,” he said. “I liked it very, very much.”

Shen Yun Performing Arts has four separate companies touring the world simultaneously. One of the conductors on this year’s European tour is Kiril Tarpov, himself Bulgarian, who personally invited Ambassador Stoev to the show.

The ambassador expressed his gratitude for the invitation and praised both the conductor and the orchestra.

Being a diplomat with an interest in culture, Ambassador Stoev has attended many different cultural and musical events, but this was his first real contact with traditional Chinese culture.

“Everything was amazing, especially the performance of the people, and the smiles on their faces,” he said. “You can see that they’re feeling it’s a great honor to perform on stage and to transmit this kind of tradition to other peoples and nations.”

Apart from traditional Chinese dance, Shen Yun showcases ethnic and folk dances. China has 55 ethnic minorities, and “their attire is as diverse as Chinese culture itself, with great disparities based on region or ethnicity,” according to the Shen Yun Performing Arts website.

“It was really very wonderful to see these different types of traditional costumes as well,” Ambassador Stoev added.

He also said that he believes culture to be the most direct path to the people.

“If you transfer this tradition and this spirituality from one place to another, everybody can learn from that. And I can say that this kind of combination is the best way to get directly to the heart of the people who are watching it.

Bulgaria and China are two different cultures, but Bulgaria has also a tradition of combining music, dance, and solo performances, the Ambassador said. He expressed a hope that Shen Yun Performing Arts could be brought to his home country as well.

“I think it would be a great success to have this performance in Bulgaria,” he said.