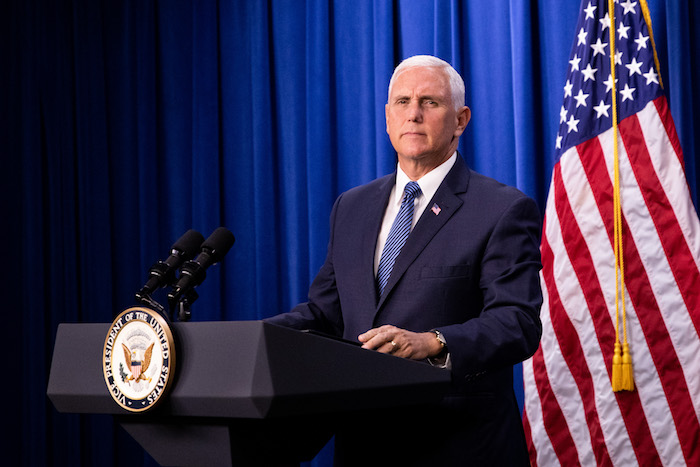 As the border wall with Mexico that President Trump is building gains greater and greater attention, so too has the early 20th-century poem by American poet Robert Frost, “Mending Wall.” The poem takes issue with the old proverb “good fences make good neighbors,” which happens to be precisely the same proverb that Vice President Mike Pence has used in the past to describe the border wall with Mexico.

Pence said, “But you know, there’s an old saying in Indiana that good fences make good neighbors. And the way we can be good neighbors is with strong leadership in the United States as a start.”

Now, Frost’s poem is becoming a sort of anti-wall anthem. To be clear, the proverb preceded the poem, though some people seem to think that Pence was quoting Frost.

At any rate, the catapulting of an old poem to front-page news, or any page, is always exciting for literary types and led one Washington Post writer to even write their own version of Frost’s poem, lampooning Pence’s sentiment. The poem is neither well-written nor compassionate to those who have suffered because of the problems caused by illegal immigration. That said, it does have the terrific line, “Good Fences make good neighbors.” I’ll drink to that.

Lost in the romanticism of poetry and politics is the fact that Frost’s anti-wall poem specifically stipulated that the wall in his poem was not needed since “there are no cows.” Thus, any pro-wall politician may happily quote Frost and the proverb unimpeded—the Mexicans with criminal backgrounds entering the country illegally being the equivalent of cows.

Finally, in the same vein, I offer to you a poem in response to Robert Frost’s “Mending Wall,” which follows mine:

There is something there that loves a wall:
The easy car trip when your loved ones call—
No need to worry cows might block the road
And pepper it with putrid, pie-like load.
No need to live a life in fear of crime
Thanks to my front door, it’s the wall that I’m
Most thankful for. It also keeps me warm
And saves me from the lashings of a storm.
The lines are walls as well in Renaissance art,
Dividing colors, pulling space apart;
The lines are firmly shaded, unrelenting,
And chief among the means used for inventing.

Now you may hear folks quote the poet Frost
That building walls comes at some sort of cost:
A loss of our humanity’s connection,
A severing of some vague innate extension.
For Frost claims that he mends a needless wall,
Implying his mind’s broad, his neighbor’s small.
Frost mocks the phrase “Good fences make good neighbors”—
A civil tradition the common man harbors.
Yet who knows all? Who knows the future’s course?
Is not the urge to mend a greater force?
New grandkids may need fences when they play;
Strong walls on property will one day pay.
No, it was Frost who had a wall in heart
That tore tradition’s timeless truth apart…
So if a man requests a wall, then build it.
It’s more than what you think you see that willed it.

Something there is that doesn’t love a wall,
That sends the frozen-ground-swell under it,
And spills the upper boulders in the sun;
And makes gaps even two can pass abreast.
The work of hunters is another thing:
I have come after them and made repair
Where they have left not one stone on a stone,
But they would have the rabbit out of hiding,
To please the yelping dogs. The gaps I mean,
No one has seen them made or heard them made,
But at spring mending-time we find them there.
I let my neighbour know beyond the hill;
And on a day we meet to walk the line
And set the wall between us once again.
We keep the wall between us as we go.
To each the boulders that have fallen to each.
And some are loaves and some so nearly balls
We have to use a spell to make them balance:
“Stay where you are until our backs are turned!”
We wear our fingers rough with handling them.
Oh, just another kind of out-door game,
One on a side. It comes to little more:
There where it is we do not need the wall:
He is all pine and I am apple orchard.
My apple trees will never get across
And eat the cones under his pines, I tell him.
He only says, “Good fences make good neighbours.”
Spring is the mischief in me, and I wonder
If I could put a notion in his head:
“Why do they make good neighbours? Isn’t it
Where there are cows? But here there are no cows.
Before I built a wall I’d ask to know
What I was walling in or walling out,
And to whom I was like to give offence.
Something there is that doesn’t love a wall,
That wants it down.” I could say “Elves” to him,
But it’s not elves exactly, and I’d rather
He said it for himself. I see him there
Bringing a stone grasped firmly by the top
In each hand, like an old-stone savage armed.
He moves in darkness as it seems to me,
Not of woods only and the shade of trees.
He will not go behind his father’s saying,
And he likes having thought of it so well
He says again, “Good fences make good neighbours.”

Evan Mantyk is an English teacher in New York and president of the Society of Classical Poets.
SHARE
Friends Read FreeCopyFacebookTweet