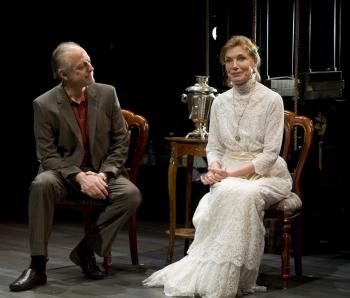 NEW YORK—It’s probably not well known, but playwright A.R. Gurney hails from Buffalo, New York, and his latest effort, “Buffalo Gal,” is the second of his works to include that city’s name in its title (“Love in Buffalo,” in 1958). Gurney is noted for such past works as “The Dining Room,” and “The Cocktail Hour.”

On the surface, “Buffalo Gal” is the story of a well-known but fading TV star, Amanda (Susan Sullivan), who has abandoned Hollywood to return to her beloved hometown of Buffalo to star on the stage in Chekhov’s “The Cherry Orchard.”

Onstage, as they await Amanda’s arrival, three theater personnel excitedly discuss their good fortune in landing her to headline Chekhov. She had been part of the theater and had permitted herself to be seduced by Hollywood. But now she is back!

Assistant stage manager Debbie (Carmen M. Herlihy) surprises the others by stating that Amanda doesn’t want to stay at the elegant Hyatt Hotel, but rather at the less imposing but traditional Buffalo spot with the rest of the cast—very down to earth. Jackie, the director (Jennifer Regan), is eager to work with Amanda because that will serve as a feather in her cap for future gigs. Meanwhile, stage manager Roy (James Waterston) busies himself about the set, ensuring that all is in place for the arrival of the leading lady, whom all appear to view as royalty.

On her entrance, Amanda does not disappoint. She has the expansiveness and sharp facial bone structure of a younger Marian Seldes, noted for her work in New York theater. The late great stage star Katharine Cornell, who hailed from Buffalo, sometimes figures in the conversation. In short, the emphasis is on The Theater, the passion of all their lives. On a deeper level, the play deals with art versus commerce.

Amanda, for her part, waxes enthusiastic about the forthcoming assignment. What greater role for an actress than Madame Ranevskaya of “The Cherry Orchard.” There’s a slight hitch, however, when Jackie casually mentions that the leading man Amanda expects to play opposite her opted out in favor of a remunerative commercial. Now Amanda is upset because she was looking forward to working with someone she knew and with whom she was comfortable.

The replacement is somebody named James someone-or-other (Dathan B. Williams), whom Amanda doesn’t know. Furthermore, the man is an African-American. Amanda is more than a bit annoyed that her brother in Chekhov’s play will be portrayed by a black man. What’s that sort of thing called? she queries. Nontraditional casting, Jackie replies.

Amanda insists on meeting James—now! That’s a rather extreme demand, but it is complied with. Happily, when James appears Amanda is delighted as she, in fact, does know him from the past.

But the unthinkable suddenly occurs. A plum job offer unexpectedly comes from Hollywood. What will Amanda do? As mentioned earlier, it’s art versus commerce.

And the winner is….

Director Mark Lamos has brought out all the nuances of Gurney’s play, resulting in finely detailed performances from all, including Mark Blum, in a supporting role as someone from Amanda’s past. Special kudos, however, go to Susan Sullivan for richly conveying the sense of the old, grand theater days, and to Carmen M. Herlihy, whose every thought is sensitively mirrored on her face.

Nice entertainment, with some food for thought.