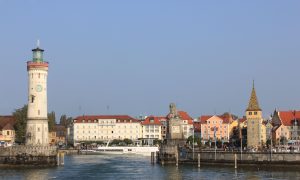 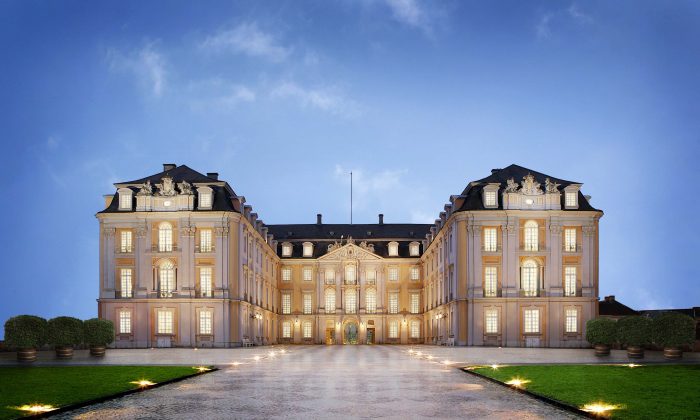 BRÜHL, Germany—Just a short train ride south from Cologne, the Brühl train stop sits right across the street from one of the most illuminating examples of Rococo.

Constructed from 1725 to 1768, the Augustusburg Palace in West Germany is considered a “living witness of the Rococo,” where one can walk through the rooms and see the evolution from late-Baroque into Rococo bloom right before your eyes on the walls and ceilings.

For this reason, the palace, together with its gardens and hunting lodge, was designated a World Heritage Site in 1984 to preserve this architectural history.

It is said that Napoleon, after a look through the palace in 1804, said it was a pity it did not have wheels, so that he could take it back with him to France.

If you were, perhaps, an 18th-century guest of this palace, you would enter via a carriage before the Grand Staircase. Resplendent with paintwork, marble, and white stuccowork, it is an eyeful.

Look upward, and a sky full of gods and goddesses welcome you. Below, the power of the Archbishop-elector Clemens August who commissioned the palace is on full display, flanked by characters symbolizing nobility and modesty. Allegorical figures such as virtue send symbols of Generosity toward the Arts and their patron Minerva, and cast out vices like Envy and Inebriety. Here, and in many motifs around the palace, you can see August’s initials, “CA.”

It is truly the centerpiece of the Rococo castle, which is actually the first example of Rococo built in Germany.

This was a time of prosperity in the 18th century, when princes in the north and west of Germany ruled their principalities from their palaces, and many of them took inspiration from Versailles.

The Rococo style started emerging in France near the end of King Louis XIV’s reign and was prevalent during the rule of Louis XV. It is characterized by the rounding of angles and embellishment. The name alludes to “rocaille,” a method of decorating grottos with shells.

At its core, it is a celebration of nature; scenes and motifs and flora and fauna can be found everywhere in the palace. Near the end of Rococo’s popularity, it grew in embellishment until it became associated with excessive ornamentation. Some consider this style just a phase of late-Baroque, differing from the grand and orderly Baroque staterooms with its intimate and ornamented salons. In the earlier portions of the palace we see simpler decorations. Apartments that were constructed later are more elaborate.

Like Versailles, Augustusburg Palace is resplendent in iconography, covered with images of gods. The rulers who took residence here believed they granted them their power, and their images reminded them of their responsibilities.

The Grand Staircase is meant to impress. It was designed by Balthasar Neumann, who was tapped for this project after his work designing the famous Würzburg Residence, a palace that is still considered one of Europe’s masterpieces. More figures are revealed once you reach the top of the staircase, and gods and goddesses are depicted in pairs, honoring peace, virtues, and the fine arts, which the Archbishop-elector loved and was a patron of.

The landing then leads into the Hall of the Guards, a ceremonial room again adorned with iconography in stucco work: Homage is paid to Religion, Nobility, Military Power, Wisdom, and Sound Advice. Justice is the one handing over the right to rule.

Through that room lies the Dining Hall-Music Room, which is another decorated receiving room. Here, Apollo looks down from high above, surrounded by the nine muses.

Beyond are the apartments.

In the place of the palace was once a medieval moated castle, and architect Johann Conrad Schlaun was commissioned in 1725 to turn the ruins into a palace. In 1728 architect François de Cuvilliés took over and turned it into an elaborate residence. Work on the new palace, after the demolishing of the old structure, didn’t start in earnest until 1735.

August, who secured peace for his states during more than four decades of changing politics, never saw the palace fully completed. His successor Max Friedrich von Königsegg oversaw the rest of the construction after August’s death in 1761.

August did, however, not only reside there but also leave various personal touches in the final architecture. On the west side of the palace, he had a chapel for prayer on every floor, tucked away from the main rooms.

And away from the apartments and receiving rooms is a small room meant to be a lavatory, filled with portraits of his beloved birds. August was an avid falconer, hence the hunting lodge Falkenlust built on the grounds.

In 1842, the whole garden was redone in the English landscaping style that was in fashion, but later on as the palace was renovated, the Baroque style garden was put back in.

If you are traveling from Cologne to Brühl, there are both train and tram options departing from the Cologne Central Station, both of which take you to the Brühl station, right across the street from the Augustusburg Palace. The tram is only 3 euros and takes about half an hour; the train will take half the time and ticket prices vary.

Admission to the palace with a guided tour is 9 euros per adult. For more information about ticketing, visit schlossbruehl.de/en