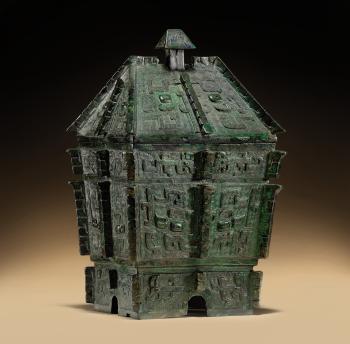 Bronzes Sale From the Dawn of Civilization

BY Nick Mclaughlin TIMEAugust 10, 2010 PRINT
NEW YORK—Jointly organized by the Asia Society and the Asian Art Dealers of New York (AADNY), New York Asia Week in mid-September has repositioned itself as the major center for Asian Art pieces outside of Asia. A highlight of the week will be Christies auction house’s sale of the Sze Yuan Tang Archaic Bronzes from the Anthony Hardy Collection on Sept. 16. The collection has approximately 120 lots valued in excess of $15 million.

The bronzes Hardy has been collecting since the 1970’s date back to a period in Chinese history which was “‘a very foggy and mysterious era,’” said Hardy, according to Meredith Etherington-Smith from Christies. “‘Our knowledge is slowly being expanded and it was only recently that scholars recognized that there was an earlier period than the Shang dynasty (circa l6th -11th centuries B.C.), the Golden Age during which most of the bronzes in my collection were produced.’”

Theow H. Tow, Honorary Chairman of Asia and Deputy Chairman of Americas at Christies, said that Hardy is an expert in Chinese Bronzes.

“Anthony Hardy has studied and amassed an unrivalled personal collection of important Chinese Archaic bronze vessels. His connoisseurship over the past 40 years has been informed by his interest in the precision of casting, patination, pictogram inscription and of course provenance of each item,” said Tow.

Bronzes are an important part of Chinese art history, spanning around 15 centuries. The Shang Dynasty, the Han Dynasty (206 B.C to 220 A.D.) and the Chou Dynasty (1027-256 B.C.) are periods that produced the most beautiful bronzes, according to Chinesebronzes.com.

A very rare and important archaic bronze ritual tripod food vessel, Li, from the late Shang Dynasty leads the collection at Christies. Many of the magnificent bronze vessels from the Sze Yuan Tang Collection date back to the 12th and 13th centuries B.C., the Golden Age of the Shang dynasty.  This was the period when Anyang, in Northern Henan province, served as the national capital, and when some of the finest and most sophisticated bronzes were created.  The bronzes were used by the Shang ruling class for ritual offerings of food and wine to invoke the aid of ancestral spirits.

Hardy developed his taste after some trial and error which culminated in a fascination with the high Anyang period’s (1300 – 1027 B.C.) technical mastery, ritual significance, and mysterious symbolism.

The Shang tombs were discovered in the early 20th century by international contractors cutting through the hillsides to build a “modern” railway system, according to Hardy.

“The unearthed Shang bronzes sophistication and diamond-sharp casting caught the imagination of such eminent collectors as the King of Sweden and his circle,” said Etherington-Smith. That’s when collecting the artifacts became fashionable in the West.

By the time Hardy’s father came home one night in the 1950’s with a ritual tripod wine vessel, the collecting of Chinese archaic bronzes was in decline, according to Hardy.

But it was that piece from his childhood in England that became his inspiration. He was fascinated by the wine decanter in his father's collection of predominantly Western medieval art. This early encounter sparked what was to become a profound life-long fascination with early Chinese art, and in particular, the exquisitely cast ritual bronzes of ancient China.