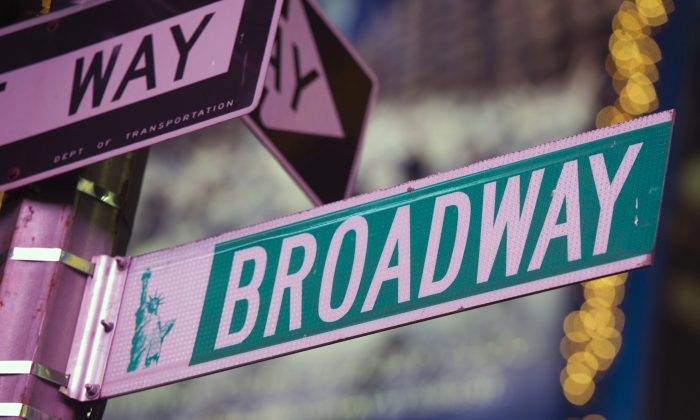 NEW YORK—Theater-goers were generous to Broadway producers this holiday season, with 19 of the current 36 shows breaking the $1 million mark for the week and almost 30,000 more people in the seats than last Christmastime.

“A Gentleman’s Guide to Love and Murder” broke the Walter Kerr Theatre’s house record for highest single-week gross, taking in $1,062,740 over eight shows, and “The Illusionists: Witness the Impossible” broke the house record at the Marquis Theatre by grossing $1,811,228 over 10 shows. “It’s Only a Play,” with Nathan Lane, broke the Gerald Schoenfeld Theatre’s eight-show record with $1,432,273.

But despite having Hugh Jackman in “The River,” Bradley Cooper in “The Elephant Man” and Sting in “The Last Ship” all onstage toward the end of the year — and “The Book of Mormon” hardly slowing down at all this year — an old favorite was once again the king of Broadway in 2014.

Disney’s “The Lion King” — which set a weekly record at the Minskoff Theatre with a nine-performance haul of $2,885,321 — will remain Broadway’s highest grossing show of the year for the second time in a row, despite six other shows having higher average ticket prices.

Disney had even more reason to be pleased since its other show, “Aladdin,” will end 2014 as the fifth highest grossing show of the year and the only new one among the top five. “Aladdin” also broke the weekly house record at the New Amsterdam Theatre with a nine-performance take of $1,986,322.

In recent weeks, bulging box office grosses have led to several shows that opened this fall already recouping, including “The Elephant Man,” ”The Illusionists,” ”The River” and “It’s Only a Play.” One show that continues to struggle to find an audience is “The Last Ship,” which has seen its overall numbers only fare marginally better despite Sting stepping onstage of late.

Numbers for the first week of January — traditionally the slowest time on Broadway — will look far different when a flood of shows close, including “Once,” ”Pippin,” ”The Real Thing,” ”Cinderella,” ”Side Show” and “This Is Our Youth.”