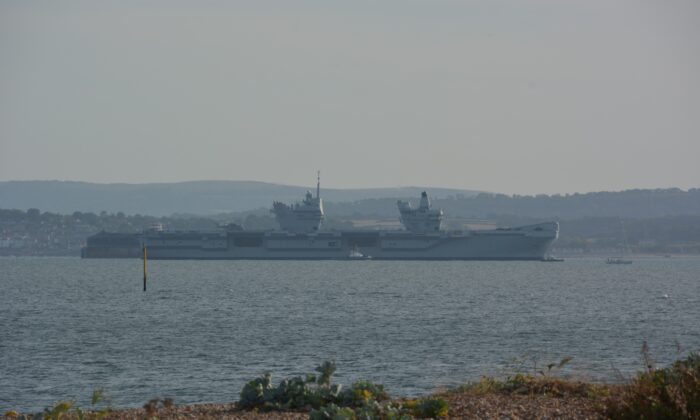 The Royal Navy aircraft carrier HMS Prince of Wales, which broke down off the Isle of Wight, is seen returning to the Solent off Portsmouth, Hampshire, on Aug. 29, 2022. (PA)
UK

The aircraft carrier HMS Prince of Wales could miss crucial flight trials with F-35B Lightning jets off the American coast after it suffered a problem with a propeller shaft.

The £3 billion carrier, which was commissioned in 2019, set sail from Portsmouth on Saturday amid great fanfare but had barely reached the open sea before it had to turn back because of an “emerging mechanical issue.”

It has now been confirmed by the Royal Navy that the starboard propeller shaft has malfunctioned.

The carrier has now limped back into the Solent, pulled by tugs, and is moored in Stokes Bay off Gosport while a detailed assessment is carried out by Navy divers.

The 65,000-tonne vessel, a NATO flagship, had been due to undertake the Westlant 22 joint training exercises with the U.S. Navy, U.S. Marine Corps, and Royal Canadian Navy off the American coast in September.

The exercise would have given the carrier’s pilots the chance to test out taking off and landing F-35B Lightning jets on the ship.

The Prince of Wales spent less than 90 days at sea in its first two years after being plagued by leaks, which flooded the engine room and damaged electrical systems. Its sister ship, the HMS Queen Elizabeth, has also been plagued with teething problems since its launch in 2017.

Rear Adm. Steve Moorhouse said in a video statement posted on the Navy’s Twitter account, “I’ve been to the ship today to see for myself what the issue is and how we in the Royal Navy can work together to make sure the ship can successfully return to her tasking.”

‘Repairs … May Impact the Ship’s Programme’

He added: “After the initial assessment, it’s likely that the fault will require repairs which may impact the ship’s programme.”

Moorhouse said they hoped to resolve the issue as soon as possible and added, “Rest assured, the Royal Navy continues to meet its commitments to deliver operations and to keep the UK, our partners and allies safe.”

If the malfunction cannot be fixed at sea the carrier will have to sail up to Rosyth in Scotland, where she was built, for repairs in dry dock. That would put her out of action for several months.

HMS Ark Royal was decommissioned in 2011 and HMS Illustrious followed in 2014, three years before HMS Queen Elizabeth came into service.