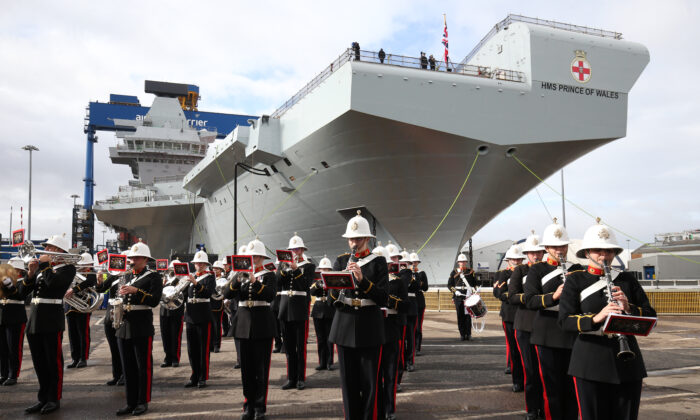 The Royal Marine band play ahead of a naming ceremony of aircraft carrier HMS Prince of Wales at the Royal Dockyard in Rosyth, Scotland, on Sept. 8, 2017. (Jane Barlow/WPA Pool/Getty Images)
UK

The Royal Navy’s newest aircraft carrier, HMS Prince of Wales, has broken down as it prepared to cross the Atlantic to join exercises off the U.S. coast.

The 65,000-tonne warship left from Portsmouth Naval Base, Hampshire, on Saturday but hadn’t gone far before it was hit with mechanical problems.

The Ministry of Defence has not commented on reports on the Navy Lookout website which said there had been “damage to the starboard propeller shaft.”

The vessel had been due to leave Portsmouth on Friday but a technical issue delayed it for 24 hours.

Thousands of fans enjoying the Victorious music festival on Southsea Common had the added bonus of seeing the giant carrier sail past but it got no further than the Isle of Wight.

The £3 billion ($3.5 billion) ship was commissioned in 2019 but spent less than 90 days at sea in its first two years after being plagued by leaks, which flooded the engine room and damaged electrical systems.

HMS Prince of Wales is due to undertake join training exercises with the U.S. Navy, the United States Marine Corps, and the Royal Canadian Navy, which will involve F-35B Lightning jets.

‘Push the Boundaries of Uncrewed Technology’

A Royal Navy spokesman said on Saturday: “HMS Prince of Wales will cross the Atlantic with her task group, ready to push the boundaries of uncrewed technology and the tactics used by the UK’s two new Queen Elizabeth-class carriers.

“Along with notable port stops in New York, Halifax in Canada, and the Caribbean, the next three months will see the Prince of Wales task group work closely with U.S. allies, operating F-35B jets and uncrewed systems which will define Royal Navy aviation of the future.”

Its sister ship, HMS Queen Elizabeth, which was commissioned in 2017, is due to deploy to the Mediterranean and the Baltic this autumn.

The ships were both built at Rosyth dockyard in Scotland, slotted together like giant jigsaw puzzles after different pieces were constructed in other parts of the country and floated up by sea.