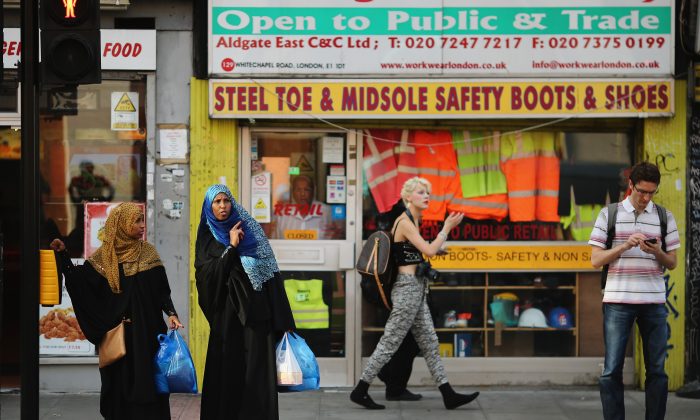 Members of the Muslim community make their way to pray at the East London Mosque on the last day of Ramadan on August 7, 2013 in London, England. (Dan Kitwood/Getty Images)
Europe

LONDON—Britain’s prime minister says Muslim women must improve their English to better integrate into British society, and suggested some migrants could be deported if they fail to speak the language.

Arguing that community cohesion is the best antidote to extremism, Prime Minster David Cameron on Monday, Jan. 18, pledged to fund English language classes for female migrants. The 20-million-pound ($28.5 million) fund will help tens of thousands of women facing social isolation and discrimination and emphasize that Britain has expectations for those who want to live in the country, Cameron said.

The program aimed at women is meant to end what Cameron called the ‘passive tolerance’ of discriminatory practices.

“At the moment, someone can move here with very basic English and there’s no requirement to improve it over time. We will change that,” Cameron wrote in a commentary in the Times. “We will now say: if you don’t improve your fluency, that could affect your ability to stay in the U.K. This will help make it clear to those men who stop their partners from integrating that there are consequences.”

Muslim groups reacted sharply to the proposal, describing the plan as a blunt instrument leveled at their expense and focusing on the extremist minority rather than the peaceful majority.

The program aimed at women is meant to end what Cameron called the “passive tolerance” of discriminatory practices and to challenge the “backward attitudes” of a minority of men. Some 190,000 Muslim women in England speak little or no English. Though Cameron acknowledged that problems of forced gender segregation and social isolation are not unique to Muslim communities, he did not mention other groups.

Muslim Woman Attends Trump Rally, but After She Stood up Security Moved In…

Cameron’s proposal reflects the challenge the country’s leaders face in trying to defuse the appeal that the Islamic State group holds for many young Britons. Some 800 British citizens have managed to enter Syria in the last four years while another 600 have been caught trying to get there.

Parents who are unable to speak English have less of a chance of preventing radicalization of their children, Cameron argued.

The irony of the prime minister calling for more resources to help migrants learn English when his government cut the funding for English classes in 2011 has not been lost on many people.
— Mohammed Shafiq, chief executive, Ramadhan Foundation

Muslim groups protested that they were being singled out.

“The best way to confront (terrorism) it is to build support within Muslims and support the work done across the country, and not lashing out and denigrating Muslims,” said Mohammed Shafiq, chief executive of the Ramadhan Foundation. “The irony of the prime minister calling for more resources to help migrants learn English when his government cut the funding for English classes in 2011 has not been lost on many people.”