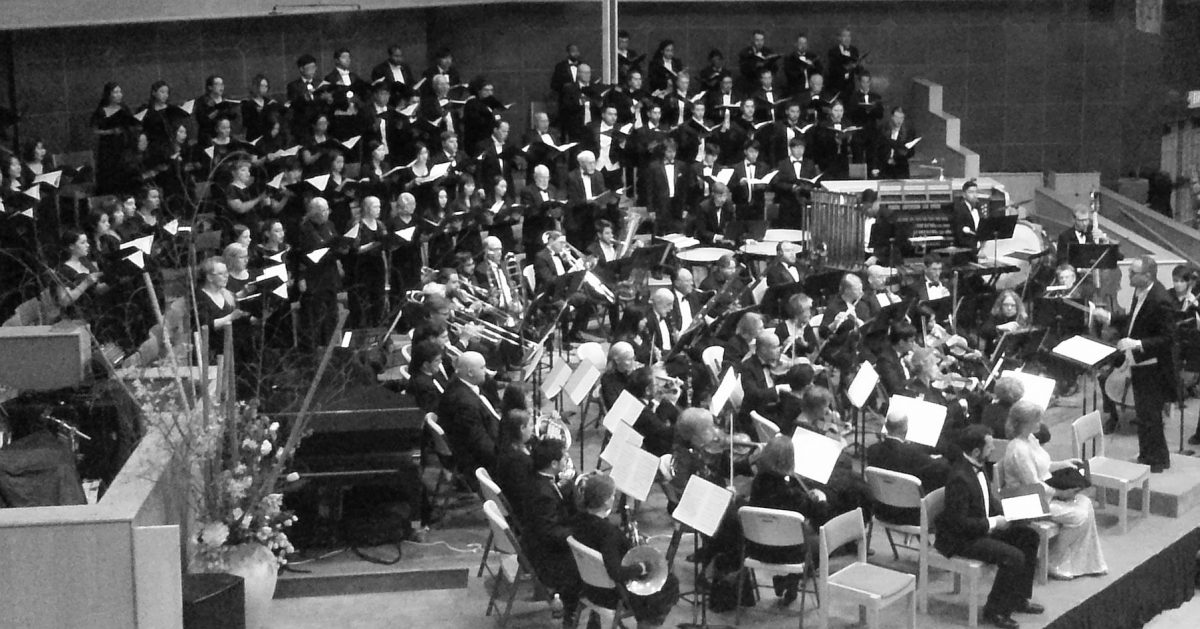 Bringing the World Closer Together With Choral Singing

By the time California State University East Bay nailed down a permanent home in Hayward, Calif., in 1959, choral singing had become central to the university’s student life. Recitals of masterworks in cappella or with orchestral accompaniment are now a steady staple in continuing this tradition.

Maintaining this institution is East Bay Choral Union, a blend of community as well as student voices, a CSUEB-based ensemble that has earned widespread applause in the San Francisco Bay Area for the pure and simple act of putting on inspiring shows singing masterpieces.

This reputation includes an eclectic composition of members, as was evident one recent evening a little north of Hayward at an end-of-school-year commencement performance at the Walnut Creek, Calif., Presbyterian Church.

Led by Dr. Buddy James, music department chairman and the director of choral and vocal studies at CSUEB, the East Bay Choral Union—and Orchestra—presented “Peace and Joy,” a two-part recital featuring “Dona Nobis Pacem,” a canon by R. Vaughn Williams that translates to “Grant us Peace,” and Beethoven’s beloved “Ode to Joy.”

Nominally priced admission, which barely covered operating costs for the concert hall, did not equate to a lackluster performance by any means. Rather, the encounter was high-spirited indeed—and, if anything, a reminder that the best things in life are free. That is, each member of the ensemble must get through stringent auditions to sing in the choir without any expectation of remuneration for performing.

That includes those 12 or so members in the group who bounded 6,000 miles for this honor.

These are exchange students from South China Normal University, traditionally a teaching college, in Guangzhou, China. This joint venture of the universities was launched in 2009.

“The objective for the students is that they complete their first [two] years of study in China,” observed Professor James to the Epoch Times, “and then come to CSUEB to complete their degree. Similar to the relationship we have with community colleges in California. This is a wonderful opportunity for students from China to learn about music from within a different culture, and for our students to learn about the world from the Chinese students.”

Jiani Duan and Shuxian Wu, juniors in the exchange program, sing in the alto section. They will one day return to China with sights on a teaching career, not on a professional one in music. In a discussion after the concert, Ms. Duan noted her “pure love” for music as the driving force for trying out for the choir.

“I love singing,” she said. “It brings me happiness.”

Ms. Wu described her experience as a vocal music performer as otherworldly. “It cannot be put in words,” she said. “I just know I feel great.”

“It gets me high,” said Wieke Chen, a tenor, who calls himself “Marc,” coyly chuckling at his knack for double entendre.

The three said they all look forward to transplanting their learning experiences at Cal State to helping others in China. “Music is an international language,” added Mr. Chen.

Mr. Chen was one of the recipients of certificates of recognition bestowed on seniors. “Many thanks to America for this opportunity [to study here],” he said to the Epoch Times. “A great country.”

Until their discussion with the Epoch Times, the three had not heard of the idiom “break a leg,” the paradoxical expression to wish good fortune to performers. Whether they ever use it or not, the phrase could be passed on in their teaching, about the usage of irony in the English language.

Learning is bilateral, insists James. Notably, he expresses appreciation for the infusion of cultural perspectives from the presence of musicians from China in the choir.

“Many are excellent musicians, like our U.S. students, but these students know different music, have different learning styles, and offer different points of view. As they become more comfortable they tend to make real impressions on our students and our program,” James said.

Tyler Dragoni and Alejandra Wahl, also interviewed by the Epoch Times, are 2015 graduates of CSUEB and members of the Choral Union. The two agreed that the fusion of Chinese learning styles and cultural ways strengthen the quality of the singing.

“We may not be able to fluently communicate with our fellow Chinese singers, but we all know what ‘forte’ means,” said Ms. Wahl, whose profession is costume design for theater and film. “We all sing the same notes, and we’re united by our effort in translating the notes on the page into a performance.”

Mr. Dragoni, an erstwhile political science major with plans to teach, added that the students from South China Normal University offer purity through their passion for singing in a language not native to them.

“We share the deep sadness and the glorious exultation of the composer,” he said, “regardless of the language we speak.”

Tim Wahl
Follow
Timothy Wahl is an ESL teacher, reporter, essayist, and author living in Southern California. His most recent book is “Footballogy: Elements of American Football for Non-Native Speakers of English.”
SHARE
Friends Read FreeCopyFacebookTweet
You May Also Like