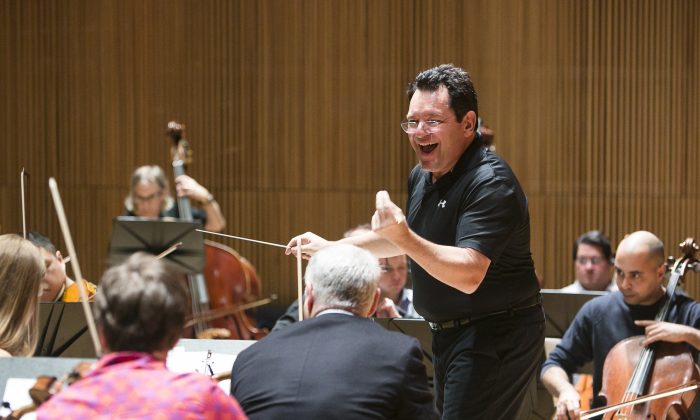 Bringing the Audience Into the Orchestra

NEW YORK—Every word he speaks cascades deliberately to the next with clear articulation. David Bernard is not one to slur his words, especially when he’s conducting. “I need you to be on the edge of your seat, you need to be playing even when you are not playing,” Bernard tells the musicians of the Park Avenue Chamber Symphony (PACS).

He maintains an intense gaze throughout the rehearsal. “Plus, I’d like to hear energy in every single attack you make, every single one, there’s no letting go, ta-ta-ta-taaa! Let’s try it again,” he said, as he went over perhaps the most recognizable first four notes of all music—Beethoven’s “Symphony No. 5.”

No matter how many times Beethoven’s “Fifth” has been played and heard Bernard feels that it is always amazing. But he’s also acutely aware that many people don’t feel as enthusiastic about the “Fifth,” or classical music in general, as much as he does.

“There is so much in classical music that inspires, that excites. The question is how do you deliver that, how do you bring people inside the music?” he said in a Midtown office a few days before the rehearsal. He has noticed that many of his colleagues and friends enjoy concerts in a visceral, engaged way. He pondered the difference between these avid concertgoers and passive listeners who are fine with just using headphones.

The amount that you can put in and get out of music is infinite.
— David Bernard

It dawned on him. “It’s that we’ve had this experience of being inside an orchestra … that gives us a perspective on this process that is beyond any kind of passive listening. We see how the music is made, we experience the music through all of our senses, and we see how the conductor works with the orchestra. There is nonverbal communication, there’s electricity between the musicians, all of this. That’s the best-kept secret in classical music today,” he said while banging lightly on the table.

If someone who hasn’t had a music-from-the-inside experience like that, despite the wonderful acoustics of a concert venue like Carnegie Hall, “They receive only a small percentage of what is going on,” he said.

From the Inside Out

As the music director of PACS, Bernard then decided to open a pathway for audiences to appreciate the live concert experience more—he decided to spread out the orchestra. In the nooks and crannies about 100 audience members will be seated between the musicians during PACS’s next performance, “Beethoven’s Fifth: FROM THE INSIDE OUT!“

“It’s going to be an amazing experience, I think for all of us,” Bernard told the musicians at their first rehearsal for the performance on Feb. 6 at The DiMenna Center for Classical Music.

After each of the four movements of Beethoven’s “Fifth” Symphony, the whole audience will move from one section of the orchestra to another—a musical chairs kind of arrangement, except that nobody will be left out. So while sitting near the violas in the ferocious struggle of the first movement, by the transition from the third movement to the fourth you may be sitting by the brass, when that struggle turns into a victory (going from C minor to C major), and later when that victory turns into a giddy celebration and catharsis, you may find yourself swaying next to the violins.

The audience will be so close to the musicians that they may even hear them breathe, or they may notice “extra” sounds, like those of a clarinet key being pressed. Page turns by the musicians may sound much louder than usual. The audience will be able to sense more intimately the concentration of the musicians and they will certainly see the conductor sweat. Hopefully they won’t get stage fright or feel as though they have to respond somehow to Bernard’s conducting.

The overall sound of the orchestra is radically different from sitting in the audience seats of a traditional concert hall. “You may not hear everything the same way, but you are going to see and feel in ways that you have never experienced,” Bernard said.

“From the Inside Out” is intended to be a concert not just for listening. Bernard hopes that it will jump-start passive listeners into appreciating more deeply live classical music concerts.

Bernard chose Beethoven’s “Fifth” for the first “Inside Out” concert because it is so familiar. “Usually there is a resistance to the unfamiliar. What we want to show is that even with the familiar there is so much more to learn, so much more to appreciate, so much more to experience. And so when people come out of this performance we want them to say, ‘Wow, I thought I knew Beethoven’s ‘Fifth,’ but I didn’t. Now I do,'” he said.

As a conductor you are not playing an instrument, your instrument is the orchestra.
— David Bernard

There are different ways to perform Beethoven’s “Fifth,” but for Bernard—in tandem with his intense gaze—it’s more about driving. “It’s always pressing forward. There’s a little bit of self-exploration in there, but ultimately you are chasing fate, or fate is chasing you. There is an intensity to life that is always there,” Bernard said.

About 20 minutes into the rehearsal and the PACS orchestra is driving along with Bernard further along the first movement of Beethoven’s “Fifth.”

“Let’s now go back to 125. Now one thing before we get started, after the fermata [the pause] the dynamic is piano [volume is soft]. I know I’m asking for a lot of intensity and articulation, but it still needs to be piano,” Bernard tells the musicians.

Bernard grew up immersed in music. His mother is a pianist and a soprano and his father was a committed listener. He started playing the piano when he was 4 and the clarinet when he was 9 years old. Later he played the clarinet in the Great Neck Symphony Orchestrator several years.The orchestra is semi-pro and local to Long Island. Bernard realized he had a lot more to say than what he could with only the clarinet. The first time he conducted it was Wagner’s overture to “Rienzi” with the Long Island Youth Orchestra when he was in high school. He called it a mind-blowing experience.

“As a conductor you are not playing an instrument, your instrument is the orchestra,” he said. Then he explained his creative process as a conductor, using the word “interpretation” carefully.

“It is a very complex concept when we talk about how to realize a work of art in real time. … The art in the music is not fully created until it is performed,” he said.

A great deal of that creation happens during rehearsals. The conductor has to make many decisions involving the pacing, the tempo, the phrasing, and the dynamics, and so forth to realize the composer’s intention in the performance. And that is where the artistry comes in, Bernard explained.

“There’s so much more going on that needs to be reconciled. It’s in many more dimensions. That thought process and the execution of that vision is the responsibility of the conductor,” Bernard said. “The amount that you can put in and get out of music is infinite,” he added.

The conductor is guiding, anticipating, and leading all the while embracing the capabilities of the musicians. “Many times it’s about not getting in the way as much as it is about guiding. Guiding is an important concept because when you guide someone you are allowing those people to make their own destiny,” Bernard said.

“You put a bit of yourself into the music and it comes back at you, and how that occurs throughout a work and across performances is almost magical. … It’s a dance and that dance, especially with the result that you get over time is fantastic,” he said.

That collaborative dance between the conductor and the orchestra in realizing the artistry of a piece can become even subtler.

“It becomes more than just ‘I’m following you, you are following me.’ … You get to the point where the conductor and the orchestra almost read each other’s minds.

Most of the artistry gets worked into the piece during rehearsals, but the full creation occurs during the live performance. And each live performance, of course, is unique. Even if it is recorded, the experience of it is never the same as in the present moment. It’s something that cannot be experienced with streaming or through a smartphone.

Bernard believes that the Inside Out concept “could result in an evolution in the concert experience. … It has to be something beyond just listening in a two dimensional way. I think that’s key,” he said.