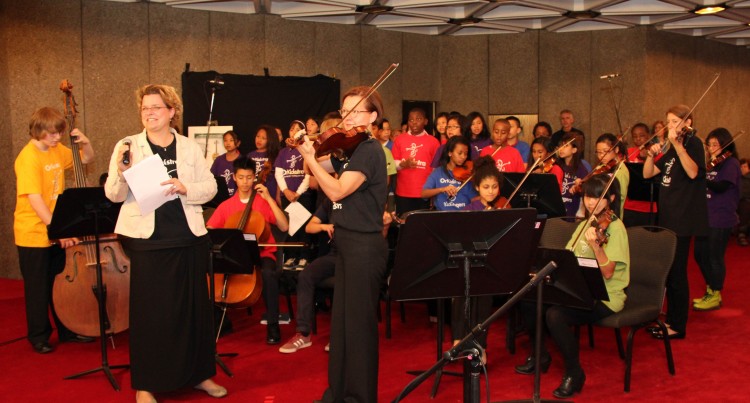 Bridging the Distance With Music

Ottawa’s National Arts Centre Orchestra does a lot of outreach work and arts education with children.

But outreach took on a whole new meaning Oct. 27 when members of OrKidstra in Ottawa teleconferenced with the Iqaluit Fiddle Club in Nunavut to share and learn from each other while each watched on a large screen at their respective locations.

The children in the Nakasuk Elementary School gymnasium saw nine Inuit singers and drummers from the Nunavut Sivuniksavut (NS) program perform the opening number in Ottawa.

NS is an education program in Ottawa for Inuit high school graduates who spend eight months at the Algonquin College-affiliated school.

“One of the big things is the cultural aspect, which is more of an extracurricular activity at the school. It really gives the kids a strong cultural understanding and an understanding of where they came from,” explains Rebecca Mearns, a graduate of the program and now an instructor.

“Being able to learn the throat songs and the drumming builds that connection to where they come from and hopefully to bring that into the future with them and to share it with kids like they did today.”

After all the children at both locations introduced themselves, they participated in a “call and response” titled Treasure Your Instrument—It Is Your Voice.

Two fiddlers played in Iqaluit and a quintet in Ottawa played a short piece, followed by two girls throat singing in Iqaluit, which caused some giggles among the kids in Ottawa.

“It is for entertainment and for fun. It’s to make each other laugh, so that’s the aim of the game; you are trying to throw your partner off. That’s why the girls started laughing at the end and everyone else joined in laughing because that’s how it’s supposed to end.”

Some of the kids held a sharing circle where they talked about what music meant to them. One girl in Iqaluit said, “Doctors heal you physically, music heals your soul and your heart.”

The Iqaluit Fiddle Club played Beethoven’s “Hymn to Joy” (“Ode to Joy”), which was then replayed by both the northern and southern youngsters together.

Those in Iqaluit sang Amazing Grace in Inuktitut. After a short lesson in Inuktitut, the song was sung again with the kids and the audience in Ottawa joining in.

OrKidstra is a music education program in Ottawa, with three main components: KidPlayers, KidSingers, and KiddlyWinks , for children ages 5 to 16. The program “gives the opportunity to learn a musical instrument, play in an orchestra and/or sing in a choir,” says the website.

Members of the National Arts Centre Orchestra started a Northern Tour that runs Oct. 26 – Nov. 4 as they go to several Northern communities to bring live music and share the stage with local artists.

As a follow-up in late April 2013, hundreds of artists from across the North will be in Ottawa to showcase their talent in the Northern Scene Festival. Earlier that month, children from Ottawa will go to Iqaluit to perform and meet their counterparts.