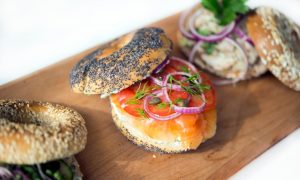 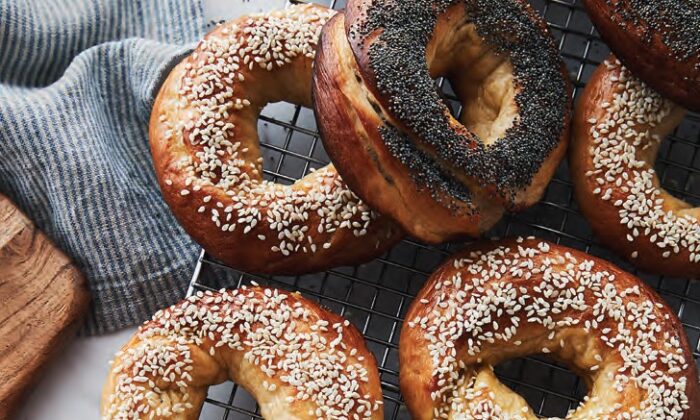 Jewish in origin but cross-cultural in appeal, bagels are a unifying force
By Amy Rosen

I eat at least half a toasted bagel every single day. It is my lifeblood. It is my heritage. It’s usually my breakfast.

There are many Jewish dairy restaurants in my hometown of Toronto that specialize in baked goods such as bagels, challah, babka, and the rest of it. Back at the turn of the 20th century, when boatloads of observant Jews were arriving from eastern Europe to escape persecution, “dairy” meant kosher (because no meat was in the mix, the fear of non-kosher meat, or the mixing of milk with meat, was eliminated), and kosher meant home.

One restaurant that serves only dairy, United Bakers, was founded in 1912 and is still thriving, while Harbord Bakery has been baking the world’s best challah and cheese Danishes since 1945. The city also has countless dedicated bagel spots, from Gryfe’s to Bagel World to Bagel House to the new pisher, NU Bügel in Kensington Market, where Toronto’s Jewry first laid roots.

In the mid-1990s, I was attending school in Halifax, Nova Scotia, for a journalism degree along with a tight class of about 36 students. Dave, a nice guy from a Toronto suburb, was one of them.

I didn’t eat pepperoni pizza and that’s what the gang always ordered, so Dave, who I believe was secretly in love with me, always had a bagel and mini packet of spreadable cream cheese on hand for me in his dorm room. One evening, when a bunch of us were gathered at Dave’s for an impromptu post-exams pizza party, Dave dutifully prepared my bagel and schmear. All dark hair and deep brown eyes, he suddenly looked different to me.

Even in Halifax, where many pronounce them “bah-gel” (shudder), Dave knew that this was a meal I could eat and enjoy. He didn’t steal those bagels from residence for himself; he stole them just for me. This was a guy who was thoughtful and giving and knew me so well. It might have been the cream cheese talking (though more likely the beer)—but it did make me wonder if he could he be my beshert (my destiny)?

Bagels unify us, their doughy circles connecting Jews like a chain-link fence across the Diaspora. There’s breaking bread, and then there’s breaking bagels. For non-Jews, it’s the gateway drug to Jewish cuisine.

My friend Ilona isn’t Jewish but is deeply fascinated by Jewish food customs. I would go to a bar mitzvah brunch, and she’d ask, “What did they serve?”

After a while, she just stopped asking.

But here’s the thing: A fresh bagel is so delicious and comforting that it never gets stale. And once you try it with a fresh schmear and some lox, it’s game over, bubeleh. You officially become part of the inner circle.

Excerpted from “Kosher Style: Over 100 Jewish Recipes for the Modern Cook” by Amy Rosen. Copyright 2019 Amy Rosen. Photography by Ryan Szulc. Published by Appetite by Random House, a division of Penguin Random House Canada Limited. Reproduced by arrangement with the Publisher. All rights reserved.