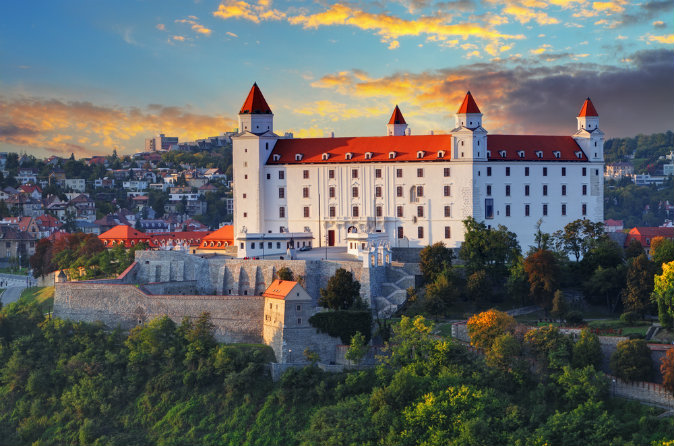 I honestly had never given the city much thought and didn’t know much about it other than we had extended family ties there. But when I was invited to visit as a day trip from Vienna, I thought it would be the perfect chance to explore the city.

Arriving by catamaran, the trip took just over an hour sailing down the Danube.

Unfortunately when we arrived, the clouds began to roll in and the sky turned grey. We knew rain was inevitable. Luckily, walking off the boat we were swooped up by our tour representative who put us on a mini train ride of the city.

As our train made its way up the steep castle hill, I almost had a heart attack thinking that it wouldn’t make it. Finally we got to the top and were given the opportunity to get out and explore the park for a bit.

The views from up there are some of the best in the city.

I loved seeing all of the orange rooftops– another reminder of Prague. But as my vision swept across the city, I could see the shift to areas more modern with high-rises and large suspension bridges. This was something Prague definitely seemed to lack.

We didn’t have enough time to go up and visit the castle because we spent so much time looking out at the views. I probably could’ve stayed there even longer– it seemed like the perfect spot to sit and read or to have a picnic.

But before we knew it, we were back on the train praying that the brakes didn’t give out as we maneuvered back down the steep hill.

Chugging along into the Old Town, we passed palace after palace, now turned residence. I’m pretty sure if there were an award for the most palaces in a city, Bratislava would win. I had no idea the city had such a long and fascinating history.

Most of the buildings, similarly to Prague, dated back to the 1100s. And while the two cities are very different now, you can certainly still see the ties they once had.

We ended our tour in the town square where we were led to lunch. Back in a barely trafficked street, we had one of the most delicious meals in all of Europe. The sun started to come out a little more and we were amazed that no one was on the streets. Where were all the tourists?

As we made our way back towards the town square, we continued to wonder why there was a lack of people in the city. We found that Bratislava has so much to offer tourists– it’s historical, its architecture is stunning and its prices are very affordable.

It really is like a less crowded, less touristy, and less expensive version of Prague. And I know people go on and on about how much they like Prague, and I like it too. But you know what? I actually think I enjoyed Bratislava more.

Wandering through the streets, it finally began to pour. We took cover under an overpass and were treated to a whole other side of Bratislava. Vibrant street art covered every inch of the concrete walls, many making political statements.

Seeing this edge, this burst of culture, I think is when I really began to appreciate Bratislava. And although we left after only a few hours, soggy and cold, Bratislava had certainly made my list of places I want to return to.

*Image of Bratislava castle at sunset via Shutterstock