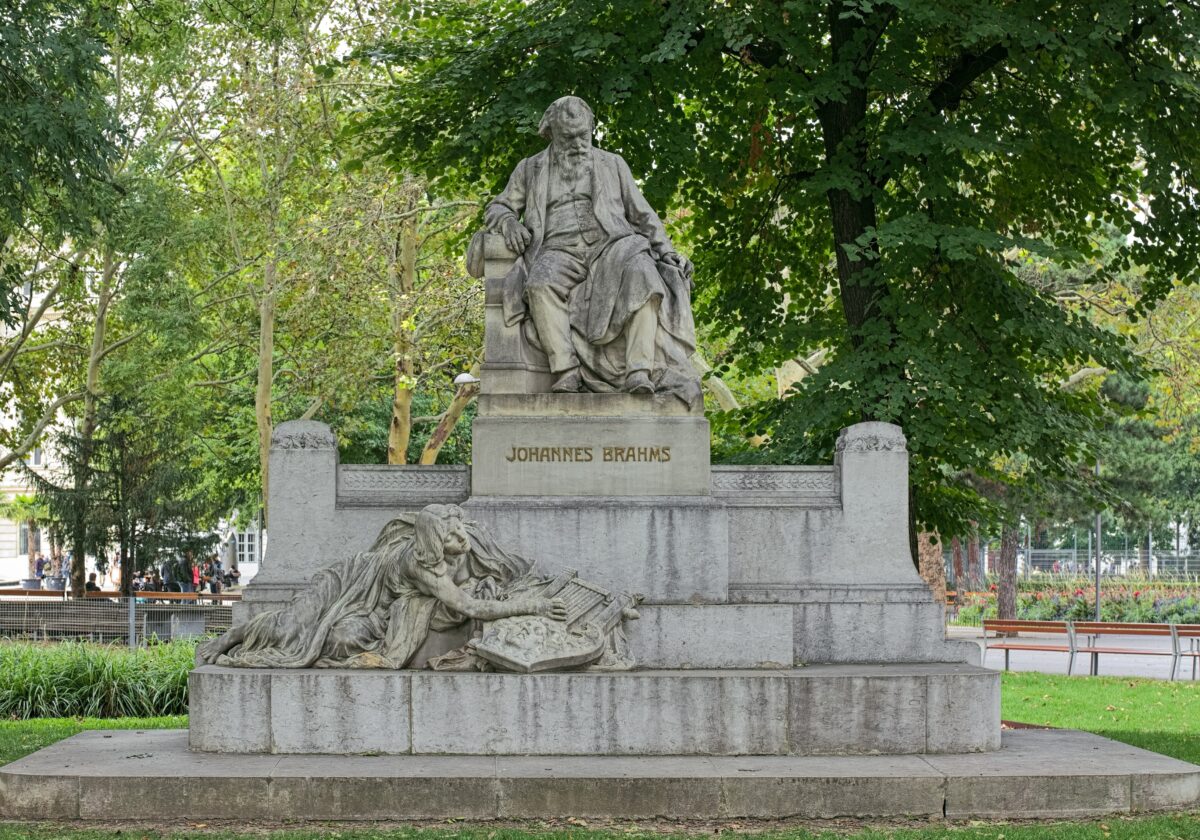 Johannes Brahms Monument in Ressel park of Vienna, Austria. The monument was created by the Austrian sculptor Rudolf Weyr (1847-1914) and unveiled on May 7, 1908. (Mikhail Markovskiy/Shutterstock)
Music

The three B’s of classical music, Bach, Beethoven and Brahms lived in the baroque, classical and romantic eras of music respectively. While Ludwig von Beethoven’s music saw success during his life, he couldn’t really enjoy said success since by the end of his career, he was completely deaf. Johann Sebastian Bach’s music was neglected for years after his death until Felix Mendelssohn brought it back to life. Johannes Brahms’s music wasn’t always accepted but towards the end of his life, he was a celebrity in Vienna and he knew it. He could walk down the street and be recognized by his fans.

Johannes Brahms (1833-1897) grew up in a simple family. His father, Johann Jakob Brahms, was a struggling musician and his mother was a seamstress. He was the oldest of three children.

As a child when he was studying piano with his first teacher Otto Cossel, he already had the aspiration to compose. Cossel had no skill in teaching composition so he introduced Johannes to his own teacher at one time, Eduard Marxsen. Marxsen saw Brahms’s talent but wanted him to focus on the piano, composing would come in due time. But Brahms would not relent. He continued to prod Marxsen about it until he finally gave in.

According the the book, “Brahms: A Biography” by Jan Swafford, Brahms was known to put himself at the forefront of his mind when composing. He composed for himself first, his friends second, and lastly for his audience.

He lived in an era when music was changing drastically. The “New German School” of music believed that music should convey a story. They felt that Beethoven was great, but music should not stop progressing beyond Beethoven. The head figures of this school were Franz Liszt and Richard Wagner. Some of Liszt’s later works bordered on atonalism, as The New German School paved the way for impressionist composers like Claude Debussy.

Johannes Brahms and Robert Schumann, the leading figures of absolute music, believed that what the listener perceived of music should be up to them, and not determined by the composer. Music should be enjoyed purely for music’s sake. In other words, progressing towards impressionism or dare they imagine, losing a tonal center, was out of the picture. Brahms appreciated Liszt’s virtuosity; he knew he could never match Liszt in that regard, but he despised Liszt’s music. He thought it was too emotional and still lacked substance. It wasn’t music that made him feel good. He felt that music should convey pure emotions. “Now if things should be going badly with you, music is always the great consolation,” he would say.

When Brahms met Robert and Clara Schumann in 1853, the couple immediately took a liking to the dashing young lad. The Brahms that we picture today is the older, plumper Johannes Brahms sporting a large beard. He in fact had trouble growing facial hair in his younger days. He was lithe, boyish, and he was a bundle of nerves when he played a piece he composed, for the Schumanns.

The Schumanns loved his music and it wasn’t before long that Robert Schumann wrote about Brahms in a music journal, calling him the savior of German music and the successor of Beethoven. Schumann believed that Brahms would be the leader and the protector of the traditions that Beethoven and Mozart had left behind. Brahms adored these two composers.

There were many who expected Brahms to fill in the shoes of Beethoven, and that led him to think and rethink his music. Brahms was compared to Beethoven all his life. His first symphony took him over twenty years from conception to completion and people called it Beethoven’s 10th. In fact, Brahms taking over twenty years to complete a piece happened not once, but thrice. The criticism on his music was often that he was trying to copy Beethoven. Once a reviewer said, “One of your themes was very similar to one of Beethoven’s!” And Brahms’ famous response was, “Of course it was. Everyone steals – the important thing is to do it brilliantly.”

When Robert Schumann became ill, he developed hallucinations and threw himself into the Rhine river. After being rescued, he was sent to an asylum where he died a year later. During this time, Brahms spent more and more time with Clara and her children. They fell in love but never married. Brahms struggled with his feelings for talented women all of his life but he was unable to devote his life to another.

After Brahms made his name in Vienna, he fully had the means to buy and furnish a comfortable and lavish home for himself. It was almost an expectation for a composer of Brahms’s caliber to live in luxury. Lavish apartments at the time were decked with peacock feathers and made to look exotic. Richard Wagner was said to be a great admirer of that style of decor. Brahms’ apartment however, resembled a student’s apartment, as described by Max Kalbeck, Brahms’s chosen biographer. His landlady was also his housekeeper. The landlady provided the furniture he used, and most of the furniture was old and shabby.

Brahms wasn’t poor. In fact, he could be considered one of the most financially stable composers in history. He composed when he wanted and he didn’t have to bind himself to an employer like many composers before him. He wasn’t a greedy man either. It is entirely possible that his great economic independence was directly related to his single status all his life. He didn’t have a wife or children to provide for. He could therefore aim his money in other directions.

After Robert Schumann’s death, Clara had to raise their children on her own. She was a spectacular pianist and she was able to support her children as well as her husband while he was in the mental asylum with the money she received performing concerts. She was a sensational woman. After she became ill and the pain in her hands grew unbearable for her to continue performing, Brahms would sometimes transfer some money to her secretly. They were such good friends and Clara would have been embarrassed to ask for money so Brahms’s generosity to her was greatly appreciated.

Perhaps Brahms’s choice of living space was also connected to his preference for a very private life. After he read biographies about the composers who preceded him, particularly Beethoven, he was acutely aware and perhaps afraid that his name and life would befall the same fate. His secrets would literally be an open book for everyone to read. So starting from his early days of composing, if he wasn’t satisfied with something he wrote, he would destroy it.

When Brahms gave compositions of his to a friend, there were several occasions when he asked for them to be returned. He would then destroy those compositions was well. His letters were the same. Near the end of his life, he destroyed the letters that were sent to him and wrote to Clara Schumann asking her to destroy his letters as well. Perhaps Clara refused, or maybe she forgot, for a portion of their correspondence has survived.

He knew his shortcomings well. For instance, he knew he wasn’t strong in writing counterpoint so he pored over Bach’s music to study from the great master. Brahms had once said, “Study Bach, there you will find everything.” And he knew that he couldn’t touch a noble woman but he struggled with his feelings regardless.

Johannes Brahms was one of the greatest composers who ever lived. And while he has his fair share of imperfections, but he had his virtues as well. He didn’t flaunt his wealth, living a simple lifestyle and he was generous with sharing his wealth too. He didn’t only help Clara Schumann in her struggling years but also young, promising artists. His legacy is the sublime music that he has left the world. As much as he wanted to avoid public speculation, the complexity of Brahms’s music spoke volumes about him.