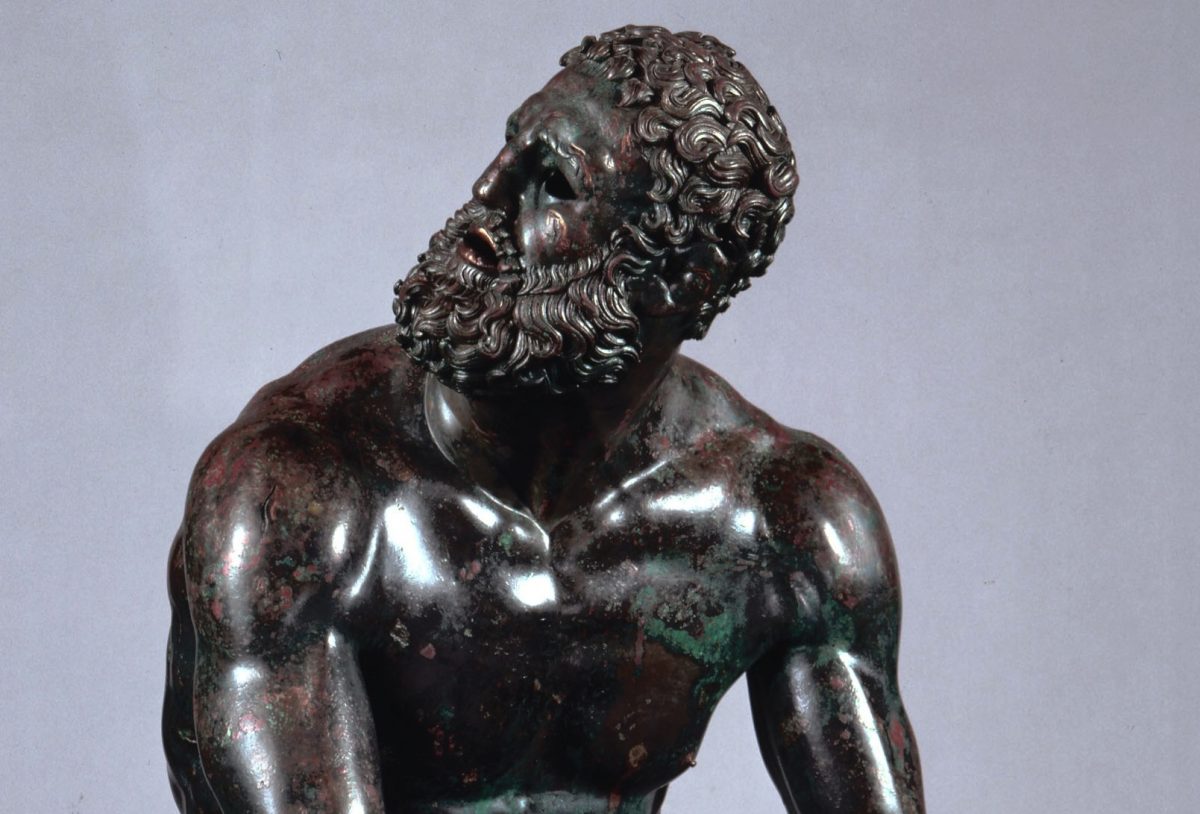 Boxer at Rest at the Metropolitan Museum

Exhausted, a boxer, bloodied from a fight, is taking a breather, shoulders hunched, sitting on a stone in the Greek and Roman Galleries of the Metropolitan Museum of Art.

The Hellenistic bronze figure, Boxer at Rest, dated late 4th to 2nd century B.C., is on short-term loan from Rome’s Museo Nazionale Romano – Palazzo Massimo alle Terme, at the Met only until July 15.

Few examples of life-size ancient Greek bronze figures remain, most sculptures having been melted down long ago and metal reused during times of war. Shipwrecks in the Aegean and Ionian seas saved treasures like the Riace and Artemision bronzes from destruction but the Boxer at Rest was intentionally preserved, buried in the Quirinal Hill during the decline of the Roman Empire, perhaps to protect it from invading barbarians.

The figure’s hands, worn from being rubbed, has lead some scholars to speculate on the sculpture’s role in ancient times as a cult object with healing powers.

This artwork conveys physical exhaustion in every body part, down to the feet. The boxer’s muscles are tense, hands puffy from punching, face swollen from being punched. Large shoulders, thick neck, the fighter’s nose has been flattened and he has cauliflower ears. With a blank look on his face, the fighter turns to gaze over his right shoulder, too drained to express any feeling at all.

Nude except for boxing gloves and a kynodesme, a sort of ancient Greek jock strap, the fighter is covered with cuts. This artwork is a marvel of technique, wounds in the boxer’s bronze body inlaid with copper. Lips and nipples are also made with copper and a bruise under the boxer’s eye was darkened by adjusting the alloy of the bronze. The fighter’s hair was cold worked, designed into decorative rhythms yet utterly convincing, curls weighed down with sweat.

Exhibited outside Europe for the first time, the loan is part of a public relations effort by the Italian Government to promote that country’s culture in the United States. (Upstairs, a portrait by Velasquez borrowed from Galleria Estense in Modena, Italy is part of the same initiative.) The visiting boxer with life-like presence will return to Rome in just a few weeks, making this a window of opportunity no to be missed.

More information about Xico Greenwald’s work can be found at xicogreenwald.com