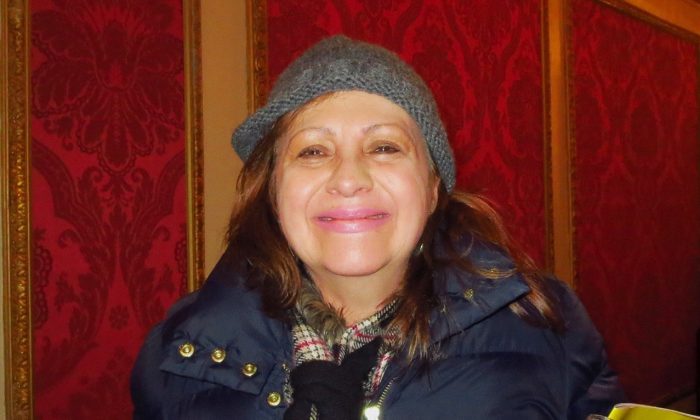 “I feel like I love the singers, oh my god, god bless everybody, it’s so beautiful,” said Steve Reddy who attended the 2:00 p.m. show with his wife and sister-in-law.

To Mr. Reddy, who seemed to be at a loss for words, the show was so beautiful that it was “like magic,” he said.

He had seen many advertisements about the show at different times and he always wanted to see it, so this was his first time. Mr. Reddy was glad he finally came.

“When you sing these beautiful songs, and you see these people dancing, it looks like angels,” he said. Mr. Reddy plans to go see Shen Yun again next year. “I thought it was wonderful,” he said.

The pieces are based on legends from China’s 5,000-year traditional culture, which is divinely inspired and relies upon moral principles such as compassion, tolerance, and respect for the divine.

Audience member Sarah Patenaude, a college student studying psychology and Asian language was equally moved by the performance. “I started crying,” she said.

“It was just such an awesome experience and it was really moving,” she added.

Ms. Patenaude was particularly moved by a piece depicting a husband and wife fighting for their beliefs despite being interfered with by communist authorities.

“They were still just so faithful to each other and their beliefs. It was just so touching,” she said.

The actors in that mini-drama were practicing an ancient cultivation practice called Falun Gong, which has been persecuted by the Chinese Communist Party since 1999. Ironically, the practice reveres Buddhist and Taoist principles just like traditional Chinese culture, which the Party has almost destroyed.

“It was so sad, but so beautiful the way they pulled through,” Ms. Patenaude said.

She understood the message to be that “they seem to be fighting and the good side is always pulling through and coming out of that bad negativity.”

“I’d say it was just breathtaking,” she said.