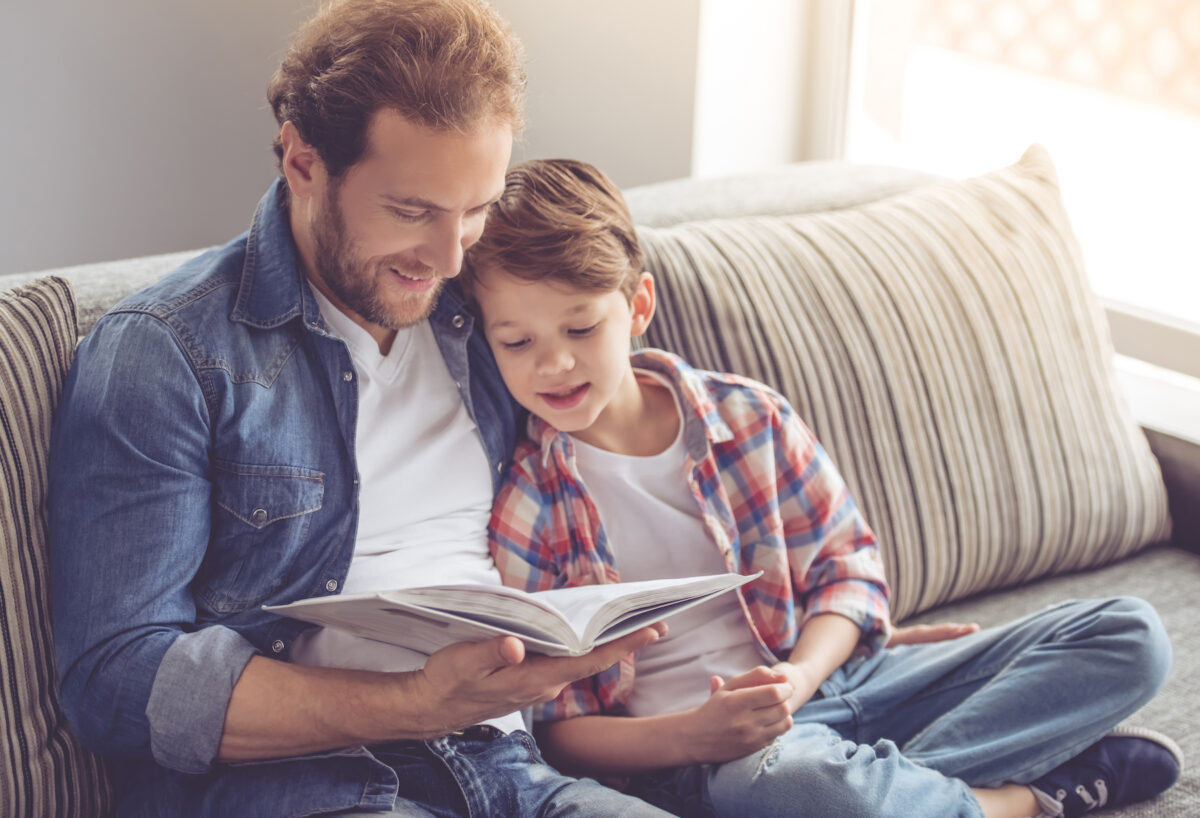 Father’s Day—the perfect day to go camping, fly a kite, have a cookout … or read a book? This holiday is a great reminder of the importance of strong, positive father figures and male role models. The following books showcase fathers (or grandfathers) who provide their families with strength, protection, and love.

Lane Smith’s picture book, “Grandpa Green,” is a perfect option for some Father’s Day reading aloud. A little boy walks through a garden filled with whimsical topiaries shaped by his grandpa to represent the milestones in his life. As the boy narrates what the funny trees in his grandfather’s garden mean, his admiration for his Grandpa is clear—and the grandfather’s life is well worth admiring! The little storyteller’s grandpa, a great example of a real-life well-rounded hero, fought for his country in a world war, fell in love and had a strong marriage, and raised a big family. A Caldecott Honor book, “Grandpa Green” is for young readers aged 3 to 7. (Roaring Brook Press, 2011, 32 pages)

For readers aged 9 and older, Frances Hodgson Burnett’s classic 1905 novel, “A Little Princess,” depicts a special father-daughter bond. The story begins as 7-year-old Sara Crewe, raised in British India, goes with her father to England. From the very first pages, the father and daughter’s devotion to each other shines as they prepare to be separated. As is customary for English children who were born in India, Sara will be attending a boarding school in England, while her father, Captain Crewe, must return to his regiment in India.

Rich and almost too doting, her father spoils Sara terribly, leaving her and her new doll with extravagant new wardrobes before he leaves her for India. Despite his imperfections, his character inspires and helps her when the family’s wealth disappears and the luxuries of her life are suddenly replaced with hardships. If her father could bear being hungry, cold, or wounded in battle as a soldier, then Sara is sure she can bear loneliness, shabby clothes, and a drafty attic bedroom. Remembering the way her father pampered her as if she were a little princess, she make-believes that she’s royalty and acts with the grace and dignity appropriate to such a role regardless of how she’s treated. (Fingerprint Publishing, 2018, 244 pages)

‘To Kill a Mockingbird’ by Harper Lee

A central figure in another classic novel, Atticus Finch in Harper Lee’s “To Kill A Mockingbird,” published in 1950, is perhaps one of the most beloved fathers in literature. Although the novel and its scenes involving the Finch family’s reclusive neighbor, Boo Radley, may remind readers of Halloween, it’s equally a book about the summers of childhood. Its themes and ambiance make it well-suited for picking up on Father’s Day. The novel shows Atticus’s active role in raising his two children, Scout and Jem, and countless moments in the novel depict him leading his children to grow in understanding and virtue.

He instructs them to be kind to their cantankerous elderly neighbor, Mrs. Dubose, despite the horrible things she says about their family. After her death, he tells Scout and Jem that she was one of the bravest people he knew for overcoming a morphine addiction and choosing to die in pain.

The values he imparts to his children—tolerance, justice, and peace-making—are reflected in how he conducts himself as a lawyer. Atticus explains to his daughter his reason for taking on the difficult job of defending Tom Robinson, a black man charged with assaulting a white woman, telling her that if he didn’t take the case, he wouldn’t even feel that he would have the authority to tell his children what’s right or wrong. Judicious, wise, and brave, he models integrity in all aspects of his life and is a true role model and an exemplary father. An important book in the canon of classics, “To Kill a Mockingbird” is a great teen read and is just as engrossing for adults. (Harper Perennial, 2002, 336 pages)