Coronaphobia and Films: How Epidemic Films Could Contribute to CCP-Virus Panic
0
Books Offering Panaceas for Our Times, and a Look Back at History 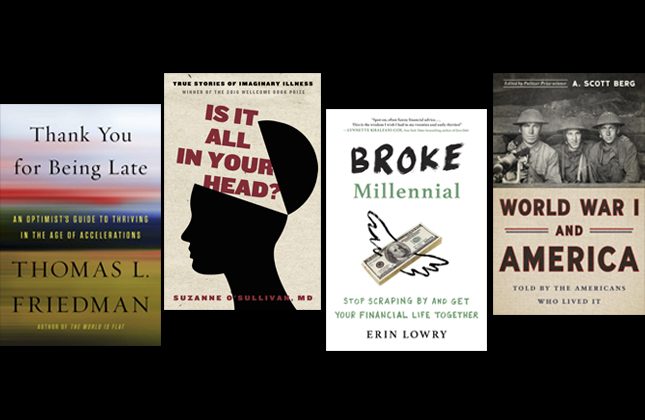 Books Offering Panaceas for Our Times, and a Look Back at History

‘Thank You for Being Late: An Optimist’s Guide to Thriving in the Age of Accelerations’

There are times when a certain type of book lands on your desk and triggers reflection.

Perhaps the topic at hand is so monumental that it requires a book-length commentary to deserve proper attention. Or maybe
you’ve explored that same topic at length and have drawn your own set of conclusions that makes impartiality difficult to exercise. When this is the case, the best panacea is to leave your beliefs in the closet and focus instead on what the book sought to provide.

Thomas L. Friedman’s new book, “Thank You for Being Late: An Optimist’s Guide to Thriving in the Age of Accelerations,” falls into such a category. It is an important, timely book in our age of deregulation and dismantlement of agencies that should be a compulsory read for anyone who is curious about our future.

“Thank You” does not shy away from pointing out the hot topics our culture and society are confronted with, and Friedman, despite casting a wide net, succeeds in laying out a persuasive investigation.

First, his prose is his biggest asset. Writing in a direct style, which may frustrate some, he manages to persuasively convey to the layperson the seismic shifts taking place in our world, and to posit his argument clearly.

In “Thank You,” he deals with the three pivotal points of when a society experiences such a radical paradigm shift that it is forever transformed. You may have already heard echoes of these underlying points: climate change, the technological revolution infiltrating every aspect of our lives, and the movement toward globalization.

What you may not know, or at least only remotely suspect, are the effects these changes are causing on our rituals, which are being disrupted by an endless acceleration. Just as the universe is expanding faster that we realize, our world is shifting gears faster than ever, demanding from us endless adaptability.

‘Is It All in Your Head?: True Stories of Imaginary Illness’

Psychosomatic illness is problematic. Disregarded for not being “real,” it is relegated to footnotes in medical books. And yet it is all around us and often has debilitating effects on the sufferer that can, in some cases, last for years.

According to author Dr. Suzanne O’Sullivan, psychosomatic illness treatment costs the health system twice as much as diabetes. Expensive for an imaginary affliction.

In her important book, neurologist and neurophysiologist O’Sullivan lays out the case for a new approach to treating psychosomatic illnesses. Her argument is convincing. Taken from real-life experiences, she shares some of her patients’ cases and ponders why so many complain about ailments that have no physical symptoms. Is it really all in their heads?

At first, the book can appear predictable, since each chapter is matched with a specific patient. There’s Pauline, Camilla, and Rachel, among others. But each has been carefully selected to illustrate O’Sullivan’s claims precisely. She points out that surviving rape or exposure to chronic mental abuses is a frequent culprit.

Modern medical science has known for a century that the mind can affect our physical health. Here, O’Sullivan clearly seeks to establish a connection between mind and body that goes beyond simple mood disorder treatment. She advocates for new ways to look at, understand, and treat unexplainable symptoms, paving the way to relief for her patients. Some of the cases will break your heart. Matthew’s did for me.

‘Broke Millennial: Stop Scraping By and Get Your Financial Life Together’

This book makes a huge assumption from the outset. How can it not? If you are young, just out of college, and living on your own, you are most likely broke. If you live at home, you’re probably close to broke as well. How could it be otherwise? Burdened by galloping college tuition fees and the prospect of months, if not years, of low-paid and unpaid internships, millennials are trapped in a maddening cycle of financial paralysis as they struggle to pay off their bulging debts.

How can they survive in this financial jungle that seems to aim for their wallets on every street corner? How can they avoid the humiliation of going out with their chums but abstaining from eating, when everyone knows they can’t afford anything?

If you stay up all night, unable to sleep, with these questions churning in your head, there’s hope on the way. Erin Lowry has crafted an entertaining book for financially clueless millennials.

Lowry’s style is cheeky and hilarious. She knows how to reach her audience. She toys a lot with the relationship theme, which millennials appear to be obsessed with, by choosing innovative terms. Getting “financially naked” with your partner implies getting honest about learning about the “possibility of STDs,” or sexually transmitted debt.

Indeed, making your bed with someone has never been so full of liabilities. It is not that Lowry has it all figured out for you, but she certainly can point you in the right direction for getting out from under debt.

“Broke Millennial” is a road map for the endlessly broke who are in serious need of a financial education. If nothing else, the book is guaranteed to ease the middle-of-the-night panic attacks.

‘World War I and America: Told by the Americans Who Lived It’

Edited by A. Scott Berg
Library of America
987 pages; hardcover $40

Looking beyond the inviting, silky quality of the paper, this volume from the Library of America offers an impressive collection of articles, essays, personal stories, and declassified documents from World War I, from both participants and observers.

The volume aims at providing a never-before-seen, kaleidoscopic view of the “never again” butchery that was going to be the war to end all wars. The publishing date was not randomly selected. Next year, we will commemorate 100 years since the signing of the armistice on Nov. 11, 1918.

The headaches A. Scott Berg, the overall editor of the book, must have experienced while deciding what to include and exclude must have been extreme. The wealth of the material is just staggering, spanning from the beginning of the war to the ratification of the Treaty of Versailles.

Lots of names will be recognizable to modern readers: Edith Wharton, Willa Cather, W.E.B. Du Bois, and of course, Woodrow Wilson. But there are many others who have been forgotten but who, nonetheless, made important contributions. Charles Lauriat is one of them.

Lauriat’s telling of the sinking of the Lusitania is a riveting, first-person account of the tragedy during the swift German torpedo attack. The sinking of the luxury liner was pivotal in the war, for it signaled an important escalation toward the United States’ entry into the conflict in 1917.

The major lessons to be learned here come from the abundance of testimonies left to us as vestiges of the past, from which we still try to make sense and brace ourselves.