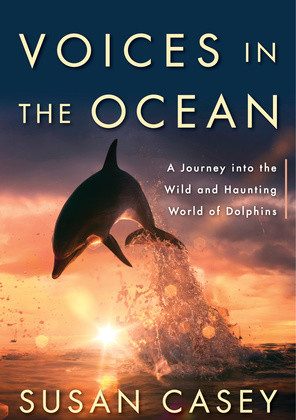 Book Review: ‘Voices in the Ocean’

The bond between humans and dolphins
By Chelsea Scarnegie

Thanks to documentaries like “The Cove” (2009) and “Blackfish” (2013), we are aware of humans’ negative impact on ocean life, but Susan Casey shows what happens when we live in harmony with it.

Dolphins are fascinating animals. What is it that pulls us so closely to them that they are depicted in some of history’s earliest art? When people spot one of these graceful beings in the ocean, their first reaction is joy; their second is wonder. “My adrenaline surged as the creatures revealed themselves,” Casey writes in “Voices in the Ocean.” “It was a pod of spinner dolphins, forty or fifty animals, swimming toward me. They materialized from the ocean like ghosts, shimmering in the ether.”

‘Voices in the Ocean’ is led by a series of heroes from all walks of human-dolphin relationships.

The author has already delved into oceanic wonders in her previous books, “The Devil’s Teeth” and “The Wave.” Both titles cover the violent power of the sea (sharks and giant waves, respectively), but “Voices in the Ocean” is more concerned with the gentle majesty of dolphins—and the curious relationship between humans and dolphins.

That relationship drove Casey to journey around the world to discover what it is about dolphins that causes some humans to treat them horrifically and others to treat them respectfully. She introduces unique encounters between humans and dolphins—from controversial dolphin pioneer John Lilly to the ocean-centric community of Dolphinville, to the friendly exploits of Fungie the Dingle Dolphin.

To understand dolphins, we must see that humans and dolphins are not as different as we might initially believe. Casey, describing the communal nature of dolphins, notes that “everything about them works for the continued health of the group.”

It is with this information about their social lives that she goes on to describe what can happen when a highly social animal is unnaturally separated from its pod. Enter Tilikum the orca, infamous for his murders of three humans. Although some may disagree, Casey makes it clear that his life in captivity at places like SeaWorld caused him to snap. Tilikum, who should have lived out his life within orca society, is now “a serial killer used for entertainment purposes.”

On the other end of the spectrum is Fungie the Dingle Dolphin, who has become something of a mascot to the town of Dingle. After researching Tilikum, Casey was understandably skeptical of Fungie’s origin: “Despite the fact that Fungie has his own Facebook page and Twitter feed, I wasn’t sure if he was quite so ubiquitous as I’d been led to believe.” However, Fungie really does live in Dingle’s harbor by his own choice, and he couldn’t appear to be happier than when mingling with his human friends.

Casey goes even deeper into human-dolphin relationships by getting a bit mystical, which may be a bit off-putting for readers who only expect science and social activism. While she makes no blatant claims that dolphins can time travel or communicate with extraterrestrial beings, she certainly acknowledges the strong ties between dolphins and New Age philosophies. Dolphinville, for example, is founded on these beliefs. Yet Casey’s loving tone makes these some of the most interesting sections of her book.

Casey is not the hero of this story. Rather, “Voices in the Ocean” is led by a series of heroes from all walks of human-dolphin relationships. Joan Ocean is one such hero—the harbinger of dolphin mysticism for residents and pilgrims of Dolphinville.

One tragic hero is John Lilly, the American physician who was fascinated by dolphins but succumbed to mind-altering drugs that ruined his reputation. Then there is Ric O’Barry, dolphin trainer-turned-activist who leads protesters to the bloody waters made famous by “The Cove.”

However, it is difficult not to see Casey as a hero in her own right. Her book is brave as well as eye-opening. It is a book written with passion, and passion is bound to come under ridicule.

Regarding the dolphins, she concludes, “Their voices were not ours, their language was unknown to us, but if we listened we could hear their song.” “Voices in the Ocean” could provide the same insight, if only we stop to listen.

Chelsea Scarnegie, from the Chicago area, has a degree in writing.