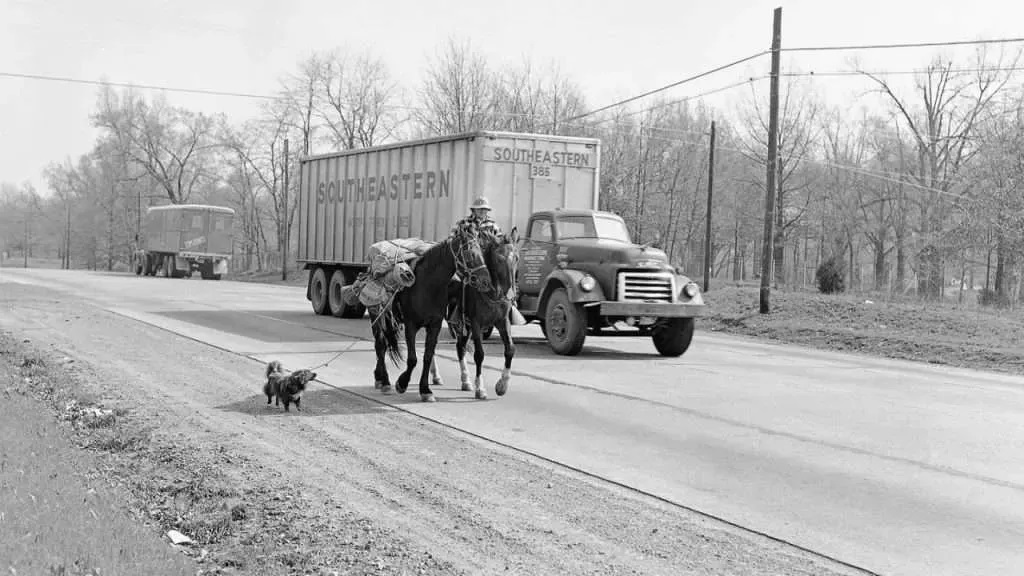 Annie Wilkins and her animal entourage often had to brave modern highways on their trek across the states. (Courtesy of BYU Radio)
Books

Book Review: ‘The Ride of Her Life: The True Story of a Woman, Her Horse, and Their Last-Chance Journey Across America’

I grew up on the West Coast, so I am familiar with the blue waters of the Pacific Ocean. I haven’t been to Maine, but I have traveled as far north from Virginia to New Hampshire. For me, the idea of traveling a scenic land route from one end of the United States to the other is enchanting if done by train or car—but via horse? And I am a horse lover.

This true, triumphal tale takes the reader right along with 63-year-old Annie Wilkins, who in 1954 decides that she would do what her mother hadn’t been able to accomplish in her lifetime: see the Pacific Ocean. She’s now living on a fragile farm in Minot, Maine.

Recently hospitalized, Annie is alone; what farm animals she had have been sold to help pay her medical expenses. Her health prognosis by the local doctor is to “live restfully” in the couple of years she has left.

A county charity home does not seem the answer. While she hasn’t ridden in many years, Annie buys a sturdy brown gelding named Tarzan (we learn later that he has Morgan blood flowing through his stalwart veins) and, together with her French-named pooch Depeche Toi, embarks on a remarkable journey. This unlikely entourage travel from their rural roots into a world rapidly changing, as it is being transformed by modern highways and an abundance of speedy automobiles.

This was a time when televisions were in nearly every home, car ownership had nearly tripled, and many were suspicious of strangers.

Annie is one gutsy gal as she leaves the security of the close-knit farming community that she has called home. Dressed in several layers of men’s clothing and with little money, she packs blankets, cooking utensils, dog treats, and grain. What drives her on day after day—often through snowstorms, freezing rain, and searing heat—is her gut feeling that all is right with the world and that Americans would treat a stranger well.

Hospitality on the Road

Perhaps an angel travels along with the group as kindhearted people invite her in for a meal, an overnight place to stay, and a barn where her steeds (she eventually acquires a Tennessee Walker named Rex to lighten Tarzan’s load) will be warm and safe from harm.

Dodging traffic is dangerous. There are descriptions of harrowing moments when readers will hold their breath at the outcome. The journey has its share of joys and sorrows as the group gingerly makes its way across some 4,000 miles through America’s big cities and small towns.

As she carries her own hopes and undying faith in humanity, Annie is convinced through her interactions with the myriad of people she meets (from ordinary folks to celebrities) that she is carrying all of their combined dreams: Her pioneer spirit is theirs.

Meeting her, shaking her hand, and patting her horses become a cherished memory of something good, sturdy, rugged, fearless, faith-filled, and wholesome. People want to be a part of that.

As soon as the local and national media hear of her story, the popularity of the unlikely trek grows. She often has to stop for a reporter’s questions or to pose for the camera. She takes it all in stride, finding it curious but nonetheless helpful.

Along the way, she is given offers of work, permanent places to stay, and even a marriage proposal from a Wyoming sheep rancher.

At Its Own Pace

Author Elizabeth Letts crafts the story in its own graceful gait. Readers will enjoy the grand vistas, shiver when the snows fall, and cringe when a flash flood threatens their stamina. Much of the story is taken from Annie’s own diaries as well as heavily researched material incorporating much of the history of that time period from 1954 to 1956.

Annie’s navigational skills will probably be questioned, as there are times when taking the road not traveled proves daunting. But the more they accomplish, the more her confidence grows. She muses at one point, “You can be so worried about the challenge in front of you that you fail to realize that you’ve been chipping away at it all along.”

Annie’s spirit is indomitable. She finds her own independent voice. She is more than a “tramp of fate.” Her homespun, common-sense approach to living her best life is poignant and powerful. Hers is a pilgrim’s tale told eloquently and with much heart.

Annie and her animal friends tugged at America’s heartstrings, perhaps for a nostalgic age that many thought was being lost. Together they inspired an overwhelming outpouring of affection and neighborliness. The reader will find many eager to support, lift up, and celebrate this woman and her never-give-up spirit. It echoes what many want to believe today.

Americana is at its purest in this story.

‘The Ride of Her Life: The True Story of a Woman, Her Horse, and Their Last-Chance Journey Across America’
By Elizabeth Letts
Ballentine Books, June 7, 2022
Hardcover: 336 pages