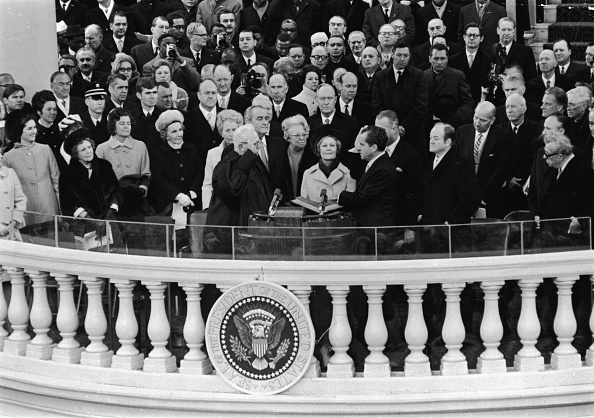 President-elect Richard Nixon (center R) takes the oath of office as he is sworn in as the 37th President of the United States by Supreme Court Chief Justice Earl Warren (center L) during the inauguration ceremony at the US Capitol, Washington, D.C., Jan. 20, 1969. (Pictorial Parade/Getty Images)
Books

An important behind-the-scenes look into the Nixon administration
BY Dustin Bass TIMEJune 25, 2022 PRINT

The 1960s and 1970s were a turbulent time in the United States. As turbulent as those times were, the past decade seems to be a mirror image of those years. While reading Dwight Chapin’s memoir “The President’s Man: The Memoirs of Nixon’s Trusted Aide,” one begins to view the modern political world through his historical lens.

Chapin was one of President Richard Nixon’s most trusted aides, eventually being sentenced to prison as part of the Watergate fallout. But this memoir is not simply about Watergate and its fallout, or even what led up to it. This book is about the hopes and dreams and realities experienced by the author and those around him in the Nixon White House.

The current C-SPAN Presidential Rankings has Nixon 14th from the bottom. Reviewing the list, one can safely assume that those ranking the presidents know very little about most of them. When Nixon is mentioned, he is typically vilified in some manner, viewed based on perspectives inherited from agreed upon narratives and the Watergate scandal. This book, in stark contrast, is written by someone who knew Nixon, not someone pretending to have known him.

From a Bright Beginning …

Chapin discusses his introduction into the Nixon campaign, via his friend Bob Haldeman, and his rise through the ranks from working on the 1968 presidential campaign to the height of orchestrating the visits to the People’s Republic of China and Moscow.

The author discusses how everyone, including himself, had to figure out their own place in a new administration. Even on the individual level, this was a massive undertaking. Collectively, as Chapin puts it, it would be like “replacing the entire leadership of the largest corporation in the world with people new to their jobs, who were expected to have their shops up and running within seventy-five days.” The stress. The expectations. The fights. The successes. The friends. The enemies. It is hard for the reader to not be enthralled with it all, just as the author still seems to be.

… To a Dark Ending

The unfortunate, but also fortunate, aspect of the book is that you know how it ends: in scandalous disaster. The reason it is unfortunate is that you become attached to the author and his friends in the administration, including Nixon himself. It is fortunate because it transitions, though not fully, from memoir to political thriller, which makes for even more enticing reading.

The author establishes a point that most people should adhere to. People don’t really know the details of Watergate yet have little issue with making claims about it. In effect, not much has changed from the days when the story was breaking, where hyperbole or outright misinformation was being purported. Today when people discuss it, they lack the ability to provide detail and clarity, yet still make hyperbolic statements.

Chapin states that the Watergate story “is very complicated and there are dozens of side stories that add intrigue to the core events of the break-in and the subsequent cover-up. I won’t attempt to retell the entire Watergate story here.”

While he does not go into all of it, he does provide detail and clarity into what was going on in the White House, how things got out of hand, and how individuals viewed the seriousness of the allegations over the prevailing weeks and months.

One of the takeaways for readers, especially those going into politics, or even business, is to get ahead of a scandal. Chop heads when there is still time to do so.

The Players: Domestic and Foreign

Chapin places the reader inside the West Wing where he worked. The reader sees Chapin’s memos and his discussions with the likes of Nixon, Bob Haldeman, Pat Buchanan, and Henry Kissinger, and thus the book is a chance to experience some of America’s greatest personalities through the eyes of someone who was there.

One of the most significant moments in modern history (and obviously the book) was the opening of the People’s Republic of China. It is incredible how this moment, produced primarily through Nixon’s political genius, affected the world then and has continued to do so since.

Nixon’s leap to visit China was viewed as impossible, not only by his critics and the press (which were practically one and the same), but also by Kissinger. Yet the impossible took place and Chapin organized and orchestrated the visits. Of the many incredibly interesting and very readable sections of the book, this part may be the most intriguing. As Chapin writes, “This trip was [Nixon’s] finest moment, his and that of the entire administration.”

Chapin discusses Chairman Mao Tse-tung, Premier Chou En-lai, and the eerie and oppressive manner in which the citizens were treated. The author’s honesty, prevalent throughout the memoir, is hardly more prevalent when he discusses the conflict between his knowledge and his experience in China.

“While I abhorred the Communist system [Chou] represented, it was impossible to not appreciate and even like him. At times it was even possible to forget that he and Chairman Mao were responsible for the deaths of literally millions of their fellow countrymen in order to establish their Communist rule.”

Along with opening China, the Nixon Administration also signed the Strategic Arms Limitation Talks (SALT) agreement with the Soviet Union. This agreement limited the manufacture of ballistic missiles capable of carrying nuclear weapons.

Not only did Nixon begin the SALT treaties, which were followed up by later administrations, but he also did something almost as improbable. He convinced the General Secretary Leonid Brezhnev and the Soviets to allow him to conduct a live address to the Soviet people.

Chapin details the visit to the Kremlin, the SALT agreement, and the address, and how after Nixon’s speech a brawl broke out between the KGB and the press corps, which involved Chapin and Haldeman. The author humorously wrote, “A fight had broken out at a peace conference.”

The details behind the scenes of dealing with foreign diplomats, those who are foreign, yet less diplomatic, and those within the same office space, can only be provided by someone who has been there.

Chapin’s account of the adventures in the Nixon Administration is, well, adventurous. There is no questioning whether Chapin is proud of his time in the Nixon administration. He makes clear throughout the book that he was and still is.

The Fall of Nixon … and Chapin

According to the author, Nixon’s great collapse took place in spite of him and because of him. Chapin discusses how Nixon would blow off steam about people (whether those working for him or not), his indecisiveness, his preference to delegate nearly to a fault, and his rather understandable grudge against the media. These seemingly small problems resulted in a massive failure of leadership that resulted in his resignation.

The author also discusses many valid points that seem to be often left out of the Watergate conversation, including the motives behind the source for the Washington Post known as Deep Throat, who, decades later, proved to be the FBI’s deputy director Mark Felt. He connects several dots regarding the involvement of the CIA. Also, Chapin pulls no punches on John Dean, who was the president’s counsel during the scandal.

Chapin discusses his time serving a nine-month prison sentence and, according to him, how that changed his life for the better. Faith and mentorship come into play at an opportune time for the author personally and for the book.

This important memoir is chock-full of fascinating moments, yet the author lands the book smoothly. As sad as the story is, Chapin doesn’t leave the reader depressed. Rather we are left almost hopeful that even through disaster, chaos, and tragedy, family, friendship and faith can be enough to pull us through.

The memoir also provides insight into the inner workings of the White House: the demands, the personalities, and the power. There is so much in this book that makes it important for various types of readers, ranging from those who simply want more insight into the Nixon years and those who plan to go into politics, even only as a trusted aide.

It is even more important due to the numerous similarities between then and now.