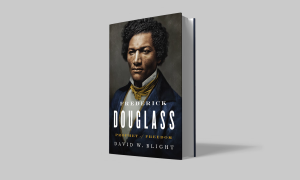 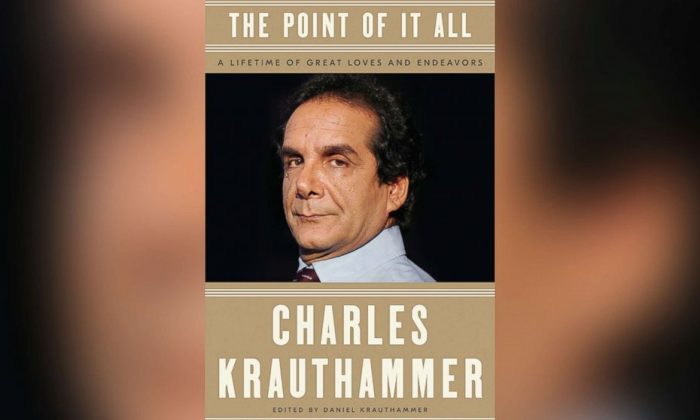 Book Review: ‘The Point of It All: A Lifetime of Great Loves and Endeavors’

Readers will enjoy the new Charles Krauthammer book, “The Point of It All: A Lifetime of Great Loves and Endeavors.” A 21st-century American Renaissance man, Krauthammer demonstrated clear thinking, breadth of knowledge, and the ability to look at things in fresh ways—characteristics that distinguish him from other thinkers of this age.

The Pulitzer Prize-winning columnist and best-selling author died on June 21, 2018. Just before his death, Krauthammer, with the help of his son Daniel compiled a collection of his writings, speeches, and columns for this book.

In “The Point of It All,” he looks at facts and puts them together in a persuasive, logical way. We clearly see how he reaches his conclusions, and readers of all political persuasions will find plenty that’s thought-provoking.

Organized into five parts, the collection covers a wide range of topics. Here are a few of his thought gems from each part.

What a Piece of Work Man Is

Krauthammer gives his opinion of several people, only some of them well-known.

He chose to write about those who fully embraced themselves and lived according to their beliefs.

Notably, Krauthammer was intrigued by the pursuit of excellence. He felt that pursuing excellence stretched people beyond what they thought they were capable of: great chess players learning to keep up with computers despite the machines getting ever better; Michael Jordan as a sportsman in a league of his own; and Jim Dickson, a blind man, who tried to sail the Atlantic alone and was able to reach Bermuda.

Dipping into the realm of the philosophical, Krauthammer affirms a Kantian ethic that prohibits using—and certainly killing—one person for the sake of another. Therefore, he opposes the pressure to organ farm the “living dead,” that is, the comatose, and rallies against using volunteer sperm and eggs to create human embryos for the sole purpose of research.

Educated people, who like to talk about politics, culture, and society, have been swept away by periodic enthusiasms, such as nuclear apocalypse, economic apocalypse, global cooling, and now global warming. But when confronted with a national riot of dread, keep your head and use some common sense, Krauthammer recommends. Therefore, we need to look inside for the reason we allow popular fear-based issues to rule us.

Krauthammer, who was Jewish, insists that the current generation must learn to confront anti-Semitism. Yet it would be a tragedy for American Jews to make the Holocaust the principal legacy bequeathed to their children. This would stress victimhood as the foundational stone of Jewish identity.

People with a 3,000-year history of creative genius should not be placing such weight on martyrdom but should emphasize solidarity with the living—Israel and its 6 million Jews.

Speaking about America, he believes we bear the burden of ensuring the survival of liberty. This role was never sought, but it became America’s responsibility after World War II. “It is a stark fact that the alternative to U.S. leadership is either global chaos, or dominance by the likes of China, Russia, or Iran,” he writes.

On the domestic front, Krauthammer mentions that the death penalty is not unjust but also unnecessary. One of the marks of a civilized society is maintaining order at the lowest possible level of official violence.

Competing Visions: America’s Role and the Course of World History

What made America exceptional, Krauthammer believes, was defining its own national interest beyond its narrow economic and security needs to encompass the safety and prosperity of a vast array of allies. He envisions a free world marked by open trade and mutual defense.

Krauthammer further states that if America intervenes in another country, the act must be both morally justified and strategically necessary. America must always consider what intervention will do to that country and should be confident enough to define international morality on its own and not be beholden to international law, world public opinion, and the public sentiments of allies.

Speaking in the First Person

Krauthammer’s son pulled together this section of the book, writing that were his father alive, his father’s personal experiences would never have been included.

Krauthammer seldom wrote in the first person; he wanted his arguments to stand on their own merit, regardless of the speaker. But I believe Krauthammer is a great role model, and this part of the book is extremely inspiring.

In his adult life, his jobs included being a psychiatrist and then later doing something completely different—being a speechwriter for Vice President Walter Mondale in 1980. Then he embarked on a career as a columnist and political commentator. In 1987, he won the Pulitzer Prize for Commentary for his “witty and insightful columns on national issues.” Later, he was a Fox News commentator and wrote the popular book ‘Things That Matter: Three Decades of Passions, Pastimes, and Politics.”

Krauthammer explains these career changes by saying that if you don’t love what you’ve chosen, choose again. And don’t let anything limit you.

At 22, Krauthammer became permanently paralyzed from the waist down after a diving board accident severed his spinal cord. He didn’t let this disability define his life or other people’s perception of him as a productive, contributing citizen.

He was not a victim, and he didn’t take himself too seriously. His attitude was to not be defined by what life threw at him and he couldn’t control: Accept the hand you are dealt with grace, and then go on to play that hand as joyously and vigorously as you can.

It is well worth the price of the book for this section alone. In an age of name-calling and noise for noise’s sake, in an age of self-absorption, this book is a pleasure to read.

‘The Point of It All: A Lifetime of Great Loves and Endeavors’
Charles Krauthammer with Daniel Krauthammer,  editor
Crown Forum
400 pages, hardcover $28