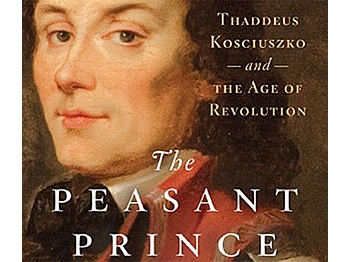 BY Patricia Chasteen TIMEAugust 23, 2010 PRINT
The Peasant Prince gives life and testament to a man who, even though he lived over 200 years ago, is probably one of the most important figures of the modern world when it comes to the worldwide struggle for liberty and freedom.

People may have heard the name Thaddeus Kosciuszko—as that of a nobleman from Poland who came to America in 1777 at the height of the American Revolution. What is probably not well-known is the fact that he was the most talented engineer in the Continental Army.

His great skills and capabilities allowed him to construct fortifications for some of the most important battles during the Revolutionary War, as well as devising battle plans that were crucial to the American victories.

And even after his participation in the American Revolution, he became the commander in chief of the Polish Army in the nation’s fight against the invasion of their country by Russia, Austria, and Prussia.

Alex Storozynski’s biography gives us a detailed account of not only Kosciuszko’s life—as a hero, soldier, leader, and even romantic figure—but introduces us to an entire realm of his notable contemporaries. His friends, comrades in arms, and foes include the likes of George Washington, Benjamin Franklin, Thomas Jefferson, Catherine the Great of Russia, and even Napoleon.

Thaddeus Kosciuszko was born in Poland in 1746 to a noble family that was well off but not wealthy. He was trained as a soldier and also as an engineer. His family owned land that was worked by serfs. The serfs' station was slightly above that of American slaves—they were bought and sold but eventually worked toward personal freedom. Even at an early age, the idea of serfs or slavery did not sit well with Kosciuszko. His schooling, starting when he was nine, was by a group of priests called Piarists. Their main goal was to revolutionize the Polish school system and that included philosophical ideas and political enlightenment.

At the time Poland was ruled by the King, and the noblemen in various states were known as princes. Kosciuszko was known as the Peasant Prince mainly because he was a lifelong champion of the of the common man. He fought for woman’s rights, serfs, slaves, Native Americans, and Jews. He was way ahead of his time when it came to the belief and acceptance of all men as equals.

His story begins when he has to leave Poland in late 1775 to escape a death sentence for daring to court a woman who was “above his station." Her father was a nobleman who was wealthy and so was considered above Kosciuszko.

Luckily for the Continental Army he came to America in 1777—shortly after the signing of the Declaration of Independence. He went to Philadelphia and knocked on the door of a man he knew was part of the war for revolution—Benjamin Franklin. He literally “volunteered” to serve the cause—and quickly showed his genius as an engineer.

The book outlines in great detail his incredible skill as an engineer and also his battle plans used in several key battles—without which the war for independence may have been lost.

It’s amazing to read how critical his achievements were during the war—including the battle plans for the Battle of Saratoga and plans for the fortress at West Point (which later became the basis for the West Point academy after the war). We are used to hearing and reading about our American heroes of the revolution such as Washington, Jefferson, Franklin, and Adams. But it’s fascinating to see how this one foreign rebel influenced the outcome of the American Revolution.

Following the end of the Revolution, Kosciuszko returned to Poland and became a leader in that country’s Constitutional Movement. He led the defense against a Russian invasion and in 1794 was the main leader of a revolt against Russian occupiers, The revolt is known as the Kosciuszko Uprising. He was captured during the revolt and spent several years in Russian captivity.

After his release, he returned to Poland and also spent time in France. He spent the rest of his life working for human rights in all countries. Thomas Jefferson, who became one of his closest friends called him “as pure a son of liberty as I have ever known.”

In reading this biography, it is interesting to compare it to the current crop of “biographies” we read. With our wired network we know every detail of everyone’s life—especially if they are famous. We see biographies of 16-year-old pop singers that detail what they wear, how they cut their hair, who their friends are—and can see videos online and interviews with them. It’s not that these people have really done anything important or critical for the world in their brief lives—but many people want to read and see anything that is in the least bit interesting or intrusive into their lives.

It’s easy to get this information—online, interviews, television, movies—we are overloaded on information about anyone we want to find out about.

The really fascinating thing about this biography is the lengths the author had to go to to research and find detailed information about Thaddeus Kosciuszko—no online interviews with Thaddeus, no “tell-all” stories, no YouTube videos. Alex Storozynski had to painstakingly research historical volumes and papers—which he outlines in almost 100 pages in the back matter.

Kosciuszko’s story comes alive to us through not only historical volumes, but also through letters written by historical figures—such as Franklin, Jefferson, generals of the war on both sides, and diaries of noble and political figures that met with the likes of Washington, Catherine the Great, Napoleon, and the King of Poland. It makes you wonder—200 years from now, what will historians use to outline and describe what went on during our times? YouTube videos? TV interviews? Will there be the beauty of personal, written letters or diaries available to refer to?

Alex Storozynski’s detailed chronicles of Kosciuszko gives us a remarkable picture of life during this critical period of world history. At times, the minutiae of the amount of information is almost overwhelming but Storozynski was dedicated to the task of bringing us the story of this remarkable man. It shows us the life and beliefs of a truly principled man—whose main drive in life was to bring liberty to all.

The paperback version of The Peasant Prince was released on August 3, 2010 and is available at major book stores.