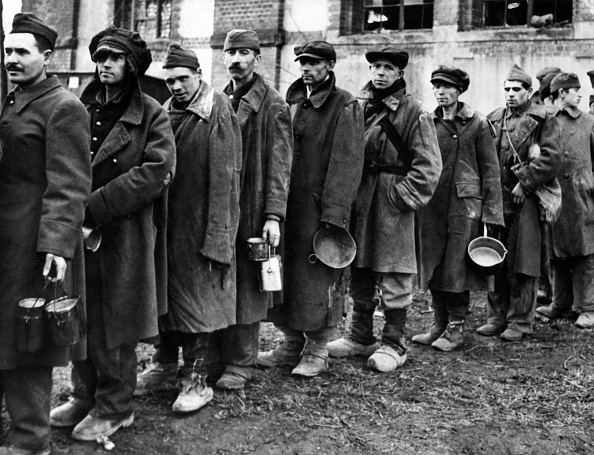 Liberation of prisoners from a Nazi camp on March 15, 1945 shows prisoners waiting in line for food. (AFP via Getty Images)
Books

Book Review: ‘The Last of the 357th Infantry: Harold Frank’s WWII Story of Faith and Courage’

A story of survival from the Great Depression to World War II
BY Dustin Bass TIMEAugust 2, 2022 PRINT

Mark Hager’s book “The Last of the 357th Infantry: Harold Frank’s WWII Story of Faith and Courage” is a thorough biography of the common man turned hero. In the author’s foreword, he makes clear his intention of discussing Frank’s childhood. It was a wise decision as his upbringing weaves seamlessly into the theme of Frank’s story. As Hager wrote, “Enduring hardships, an intense work ethic, family support, and the love of God shaped him to be a combat soldier and the man he is today.”

A Child of the Great Depression

Frank was a child of the Great Depression, growing up in a small North Carolina town. Living on a farm and in poverty, he was raised by parents (along with several relatives) who understood the means to survival.

The author takes the reader through the self-help methods of hog slaughtering and cleaning, and making opossum stew and mud turtle soup. As the author writes, “Many days during the 1930s, mud turtle, opossum, and wild birds provided the only meat that kept starvation at bay.”

Hager describes a life that no one would want, but he also describes skills that everyone should have. In a way, this book is a how-to guide on survival. Of course, growing plants and vegetables is part of that survival, but the family instilled a bit of necessary savagery in their children.

Killing for food was a must, although it is now an art woefully lost on much of modern society. Frank began with a homemade slingshot and then graduated to the rifle. Interestingly, it was the slingshot more than the rifle that proved providential later in Frank’s life.

The author utilizes the background of the Great Depression to establish Frank’s character, demonstrating that while it was his parents who developed his character traits, it was hardships that calcified them.

A Theme of Survival

Hager follows the theme of survival mentality rather seamlessly. Authors can often move too quickly into the primary topic of the book, which in this case would be the war.

The author does the subject justice by spending a sufficient amount of time on Frank’s pre-war years to establish what will come. For fiction genres, it is called character development. Though this book is a biography, the author does a fine job of showing rather than telling.

When Frank joins the Army and then engages in combat shortly after the D-Day invasion on June 6, 1944, his survival skills, proficiency with his rifle (the Browning Automatic Rifle), and his dependency on his faith and prayer come through clearly.

The story’s action sequences are vivid, and the author pays close attention to the detail describing the soldiers’ restlessness and constant anxiety. Hager also utilizes the countless hours he spent with Frank to quote commanding officers, fellow soldiers, and Frank himself.

From the overcrowded train ride to being sent to the Stalag IV B war prison, to surviving forced marches, and to escaping prison only to be caught later, “The Last of the 357th Infantry” provides the reader with an in-depth look at how American prisoners were treated by the Nazis. There are also moments of kindness shown by some Germans that demonstrate how humanity can rise, at least slightly, above  inhumanity.

At the end of the book, Hager describes how he met Harold Frank and how their friendship blossomed. Frank had never spoken in detail about his war experiences, even to his wife, though she implored him to.

Perhaps age or simply the right person asking (a fellow veteran) caused Frank to divulge his war story. Truly, it is one worth telling and worth reading.

Hager proves that there are many great stories still to be told. But he also proves something even more important, and that is the relationship that develops from listening and then retelling the story: Hagar discusses just how much his life has benefited from meeting and spending time with Frank.

“The Last of the 357th Infantry” is a fascinating story of a man’s constant battle for survival. The book is also about the principles of perseverance, courage, faith, and friendship.

There is little doubt that the story of Harold Frank will inspire readers. It can also serve as a guide on how to survive during extremely harsh times that do not include a war.

There were only a couple of issues in the book that should have been caught during the editing process. A few dates are incorrect, or are at least confusing. At the beginning of the book, there is a confusing correlation between Frank’s birth and the Great Depression. And toward the end of the story, when Germany is on the verge of surrender, the book reads that it is still May 1944 when it was May 1945.

However, readers interested in the Great Depression and World War II as understood from an individual’s experience should consider “The Last of the 357th Infantry.”

‘The Last of the 357th Infantry: Harold Frank’s WWII Story of Faith and Courage’
By Mark Hager
Regnery History, May 31, 2022
Hardcover:‎ 324 pages