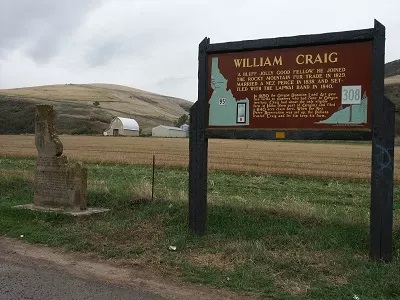 The 'Father of Idaho' was a legendary peacemaker
BY Anita L. Sherman TIMEJuly 25, 2022 PRINT

I am originally from the Northwest, Oregon specifically, but for nearly 35 years I’ve called Virginia home. I will always have a fondness for the Northwest with its majestic mountain ranges, lush forests, deep canyons, and grand rivers.

Venturing west in the 1800s from the settled security of the eastern cities is an adventure only to be imagined. But many did, those seeking new beginnings and perhaps fame and fortune.

If you are a history buff, particularly of those western states like Washington, Oregon, and Idaho, you’ll find Cannell’s “The Intermediary: William Craig among the Nez Perces” to be a well-researched account of one such hearty individual: a tall, red-haired man who has been heralded as the “Father of Idaho.”

William Craig was born in Virginia in 1807. By the late 1820s, after allegedly killing a man (some accounts call it self-defense), he fled west and entered the lucrative Rocky Mountain fur trade. Since the late 1700s, the French, English, and Americans had benefited from the riches to be had in trapping and trading animal pelts.

Part of their success was due to alliances with the various Native American tribes that enabled them to navigate the landscape and survive.

The Nez Perce were familiar with white trappers and, for the most part, got along fairly well. They had good memories from when Lewis and Clark made their famous expedition across America in 1804–06. They were allies and friends.

In 1838, Craig married Pah-tis-sah, the daughter of Thunder’s Eye, a Nez Perce medicine man. He called her Isabel. Their marriage was long and fruitful, giving him several children who were heirs to his eventual legacy.

In 1840, Craig agreed to help forge a trail (later known as the Oregon Trail) from Fort Hall near the Portneuf River to the Whitman Mission near the Columbia River.

His exploits seem to get only bigger and broader in scope. He secured several hundred acres and built a comfortable home in the Lapwai Valley. He befriended missionaries. He sheltered and saved missionaries Henry and Eliza Spalding from the cruel fate meted out to Marcus and Narcissa Whitman by angry Cayuse warriors in 1847.

Craig was fluent in the Nez Perce language. As such, his services as an interpreter were invaluable. By 1855, he served as interpreter for the Nez Perce at the Walla Walla Treaty Council. In the same year, he was appointed as agent to the Nez Perce, and he was given the rank of lieutenant colonel in the Washington Territorial Volunteer Militia.

Craig was described as generous and helpful by those who knew him. He had a jovial nature, keen sense of humor, and a caring heart for the Nez Perce, given the inevitable conflict of diverse cultures and hostilities that were inherent in westward expansion.

Complicating Craig’s role as peacemaker were events beyond his control, like the discovery of gold which brought in a flood of miners, the introduction of whiskey to Indian reservations, and a major disrupter: the Civil War in 1861. The war drew focus to the North and South, pulling needed resources away from promised services. The war also pulled away many military officers and government officials.

In 1859, Craig was relieved from his position as Native American agent. Politics always in play, there was speculation that one of the reasons was because of Craig’s Southern sympathies. This was the same year that Oregon was vying for statehood.

The book is filled with many accounts of Craig’s efforts to help the native peoples. One account has him donating several of his cattle to feed the Native Americans so that they would remain and participate in an upcoming council and not leave in anger. His efforts were applauded as an act that forestalled a war.

The book also portrays a loving family man, shrewd businessman, farmer, ferryman, and a host of other roles he played at an instrumental time in the settling of the western states.

The author, Lin Tull Cannell, was born in Coeur d’Alene, Idaho, but raised in the Pacific Northwest. Upon returning to Idaho after decades of being away, she became curious about all the landmarks that bear Craig’s name. That curiosity led her into years of research because there wasn’t much information readily available about him.

That changed when assistance came from Gloria Manning, William Craig’s great-great-great granddaughter, who offered to help with research. Being a descendant, she broadened the information on the Craig family.

Their partnership and collaboration, as well as their love and ties to the land and its people created this volume. It not only brings to life the legacy of William Craig, but it also gives the reader a richer understanding of a dynamic time when natives encountered newcomers, and when the Pacific Northwest was drawing thousands of new settlers.

Craig died in 1869 at the age of 62. For more than 30 years, he lived among the Nez Perce people. His history is intertwined with theirs. It is a story not without injustices, but it is also a story about hope and triumph and how one man made a difference in many ways for many lives.